While Central Park is full of trees, plants, flowers, open fields, bodies of water, bridges, and more, it is also home to some little-known Central Park waterfalls.

These hidden waterfalls in Central Park are the perfect addition for those that want to explore the less visited areas of the park. Although less frequented, these areas are just as beautiful as the rest of Central Park and its offerings.

This guide will go through where to find the Central Park waterfalls and how to plan your time in the park to visit them.

Let me start off my saying that these are not going to be your normal type of big waterfalls that you may be used to when traveling. Remember, we are in the middle of New York City! Expect some smaller, but just as peaceful waterfalls in the park.

Much of Central Park is also manmade, and that holds true for the water features that make their way through the park. Even though they are manmade, it does not necessarily seem that way at first glance.

There are three locations where you can find these waterfalls in the park – The Ravine, The Ramble, and the Hallett Nature Sanctuary:

The Ramble: similarly, in the Ramble you will find a stream called the Gill that connects the Azalea Pond with the Lake. Along the way there are a few “waterfall features” to take in, as you walk besides it.

The Hallett Nature Sanctuary: in Hallett, you will find a waterfall that drops into the Pond down below. Although considered a waterfall, it is not much of one, as the water pressure is more of a trickle than anything else.

To summarize: while the Ravine does have what people would consider real waterfalls, the Ramble and Hallett Nature Sanctuary options are a bit less desirable. 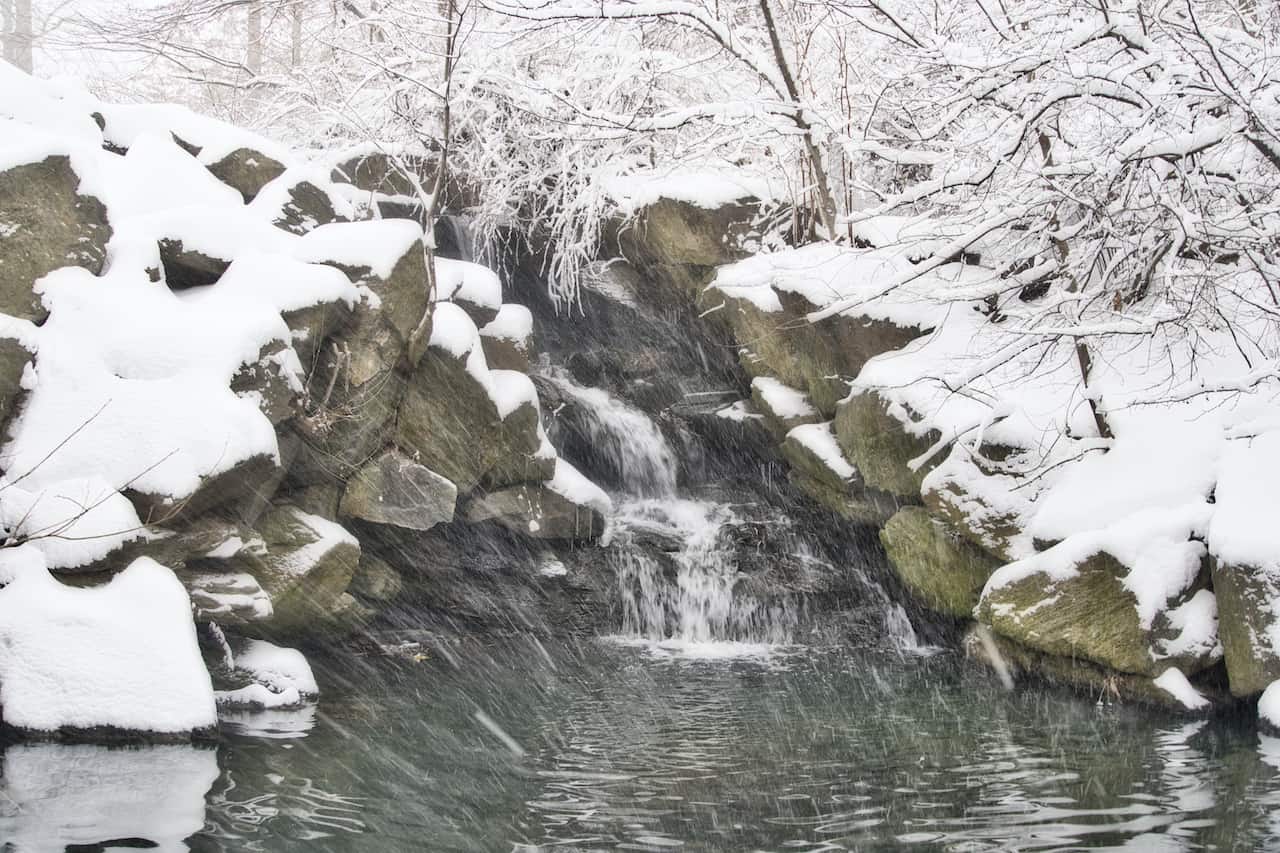 2) Locations of the Waterfalls in Central Park

Below you can find a map that pinpoints the locations of the three waterfall areas of Central Park.

If you would like to visit all three, I would recommend taking a look at the Self-Guided Central Park Walking Tour I have up on the site.

3) Where to Stay in Manhattan

Chelsea: If you are looking to be well situated between uptown, midtown, and downtown, then Chelsea can be a great option for you. You have highlights such as the High Line, Little Island, the Vessel, Pier 57 Rooftop, and the Hudson River right nearby.

You are also within walking distance to the southern entrances of Central Park. Almost all subway lines connect at Times Square so getting around should not be an issue. Recommended Midtown hotels:

Tribeca: If you are trying to stay in downtown Manhattan, then I would recommend looking into the Tribeca area. Staying here and you will be just a stone’s throw away from the World Trade Center area, 9/11 Memorial Pools & Museum, the Brooklyn Bridge and the hop on point for the Statue of Liberty.

Depending on your interest, you can visit just the main waterfall area near The Loch, or also the other smaller waterfall features in the Ramble and Hallett Nature Sanctuary.

Since the The Loch is main waterfall area of the park, I will spend more time focusing on that initially, but I will also touch upon on the other two waterfall areas after.

In the northernmost section of Central Park, you will find what is called the North Woods, where many Central Park trails are located. This area makes up the interior of the park between 102nd Street and 110th Street, with East & West Drives on either side.

In the southern section of the North Woods you will find what is called The Ravine. Along the Ravine, is a stream called The Loch (highlighted on the map above), where you can find some beautiful Central Park photo spots.

There is a beautiful peaceful path that heads parallel to the Loch, following this stream from one side of the Ravine to the other. It is along this path that you can enjoy some smaller Central Park waterfalls, and then finish up at the main waterfall attraction.

For starters, you will want to get yourself a water feature called The Pool. This body of water is located near the intersection of West Drive and the 102nd Street Crossing. On the very eastern end of the Pool, you will see a pathway down a set of rocks. By following this pathway you will be able to walk right alongside the Loch.

Immediately after leaving the Pool area down the pathway, you will find the first of the Central Park waterfalls in the area. This waterfall connects the water from the Pool to the Loch stream down below. 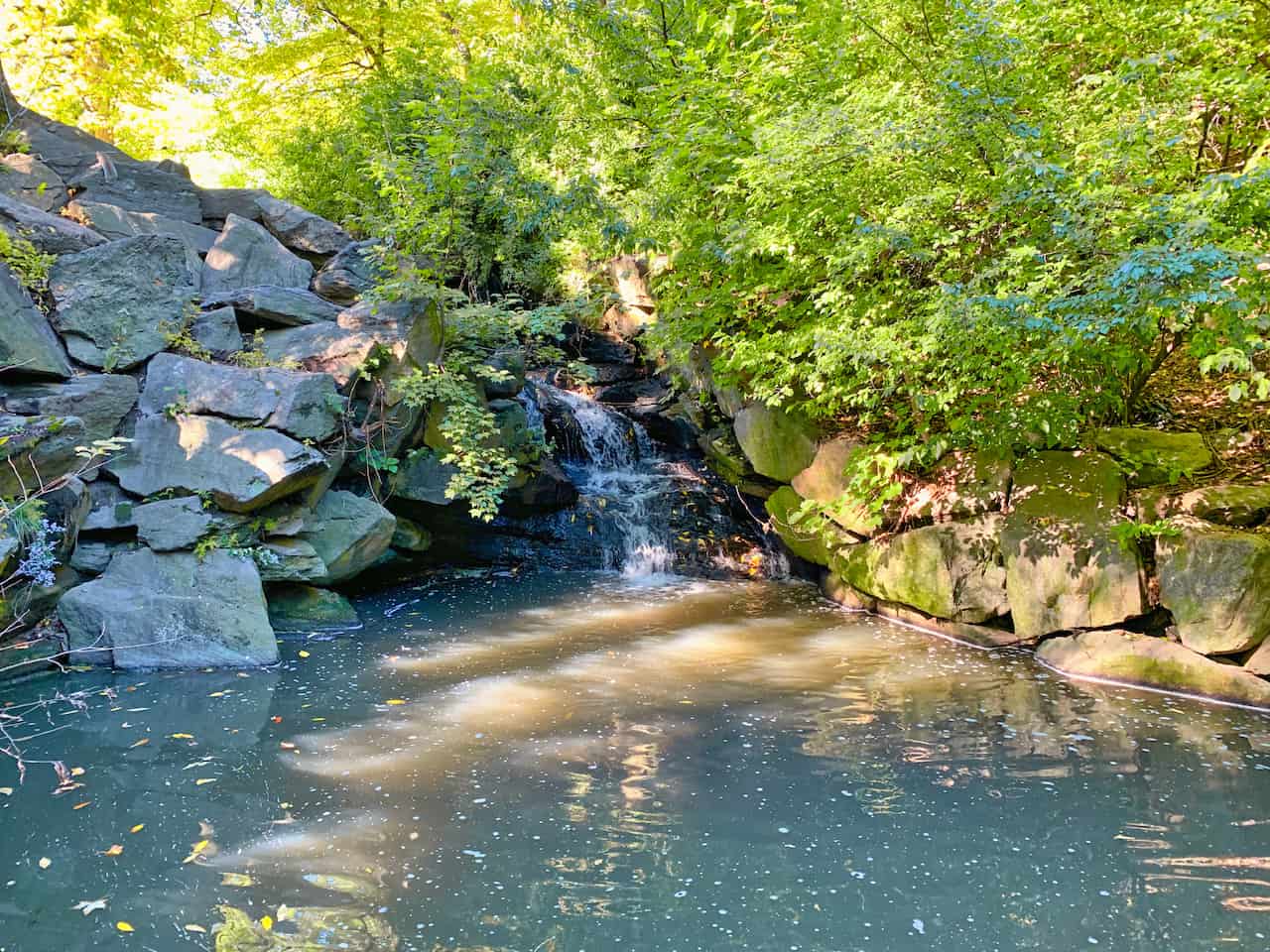 It is a nice spot to take in the view of the stream down below, the Glen Span Arch, and the surrounding trees and greenery. Be careful here as a portion of the staircase is made up of rocks and not concrete stairs.

Once you have made it down past this first waterfall, you can then continue along the Loch walking path. During the duration of the trail, you will come across a few dead-end turnoff pathways that get you closer to the Loch itself. Feel free to head down these detours to get a view of the Loch from up close before circling back and continuing with the walk.

Note that you should always try to stay to the right of the Loch – there are pathways here connecting to the other side of the Loch, which will take you a bit further away from the stream itself. 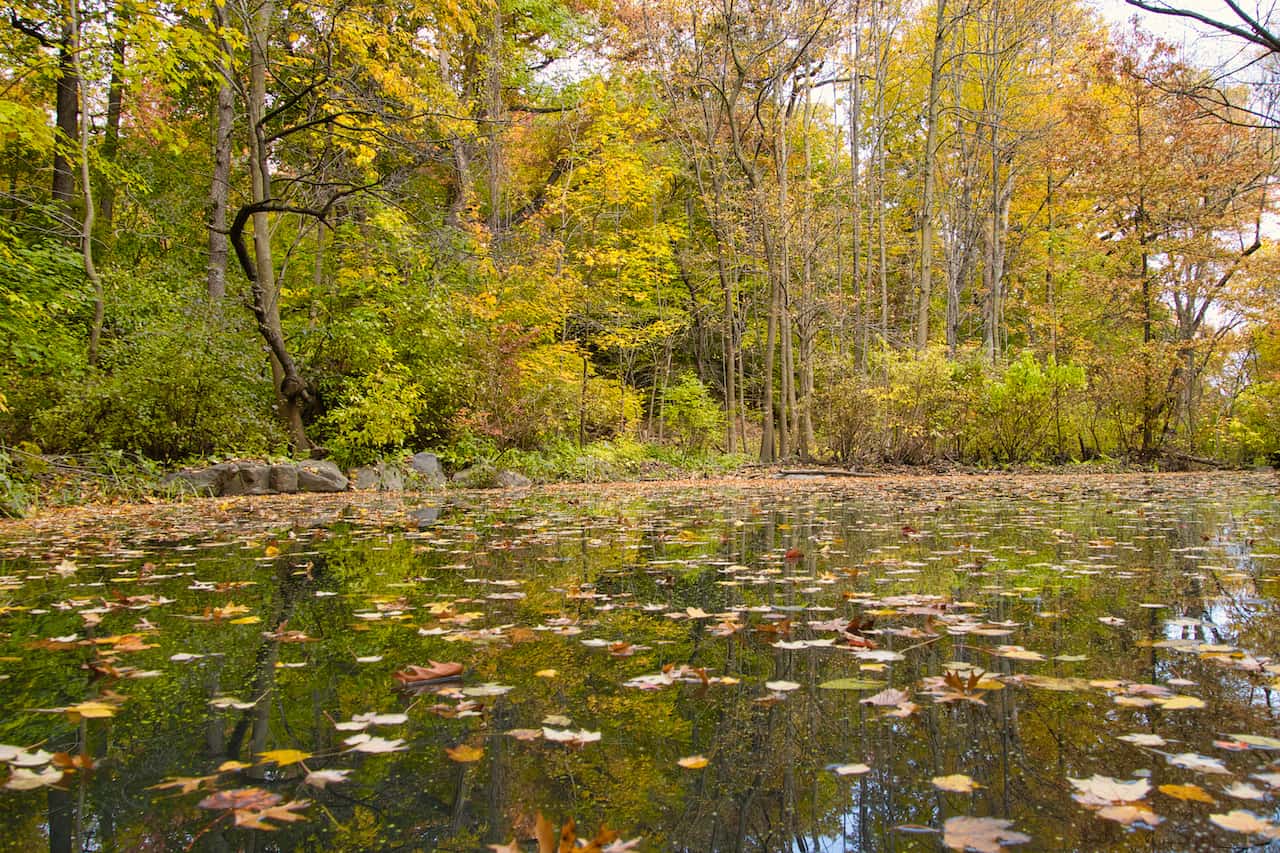 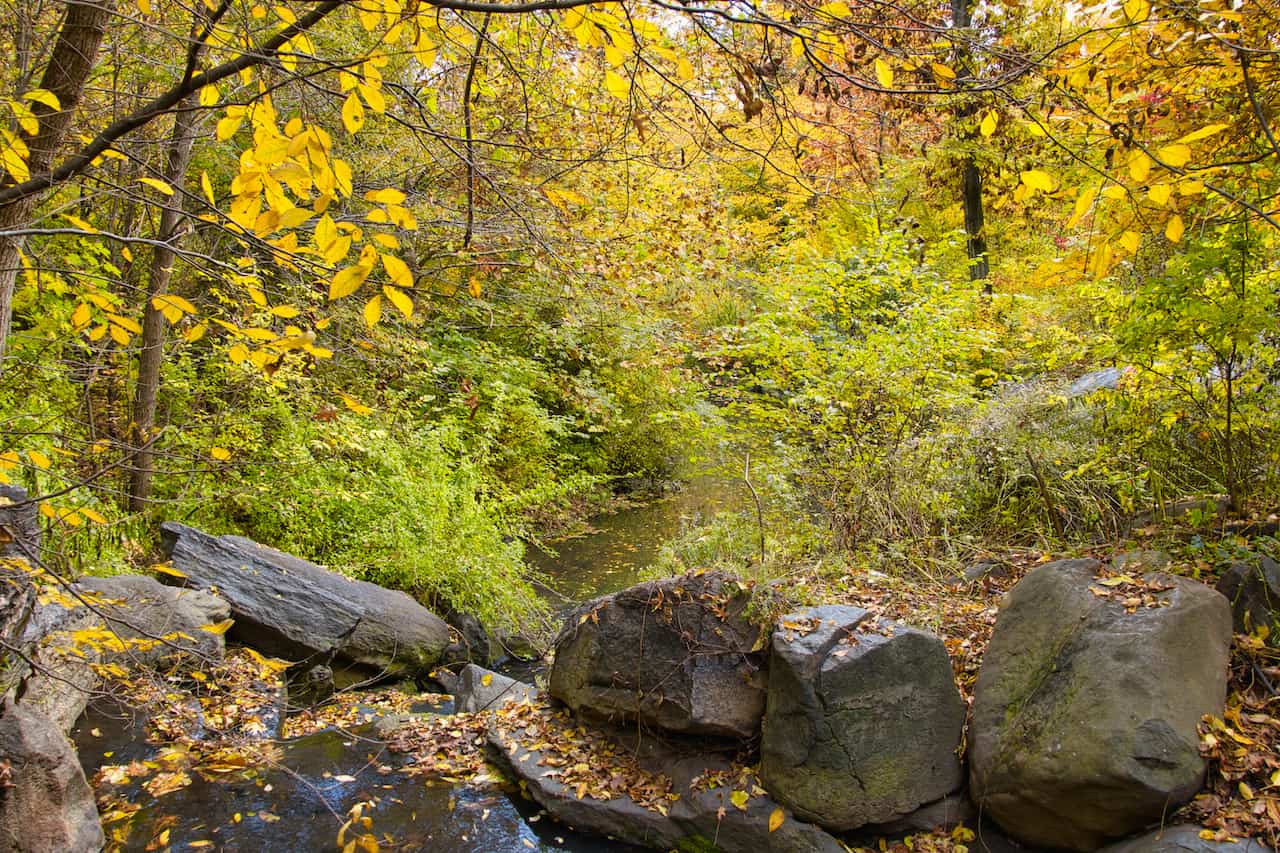 As you approach the end of the walking path, you will begin to see the Huddlestone Arch out in the distance. Right in front of the arch though, is where the best Central Park waterfall is located.

All things considered, this is probably the only “real” waterfall in Central Park, and what most would refer to as the Central Park waterfall. You can enjoy the view from up top, down below, or off to the side.

It is a great NYC photo spot to just take a seat and enjoy the surrounding nature of the North Woods (especially during Central Park Fall Foliage and a winter in Central Park). There are plenty of trees, birds, and other wildlife in the area to observe. 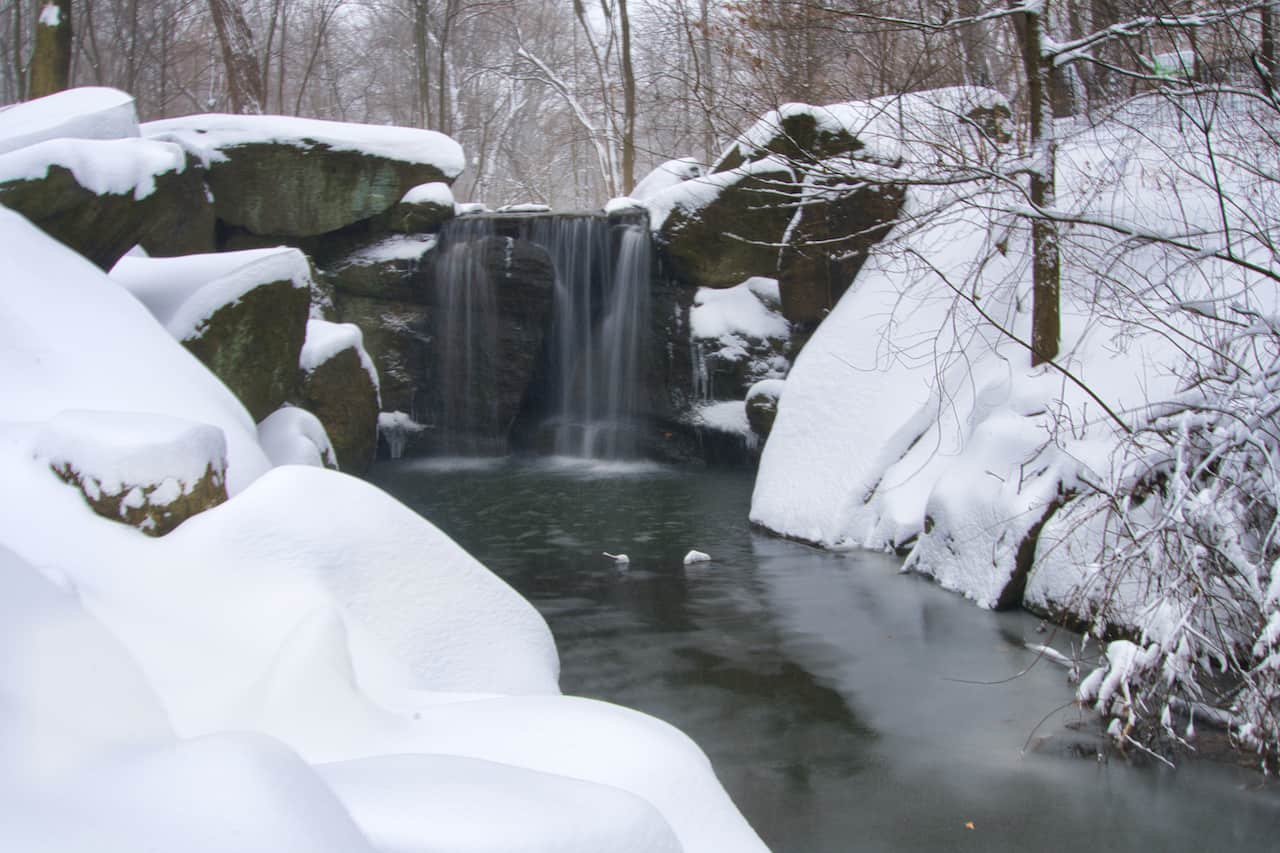 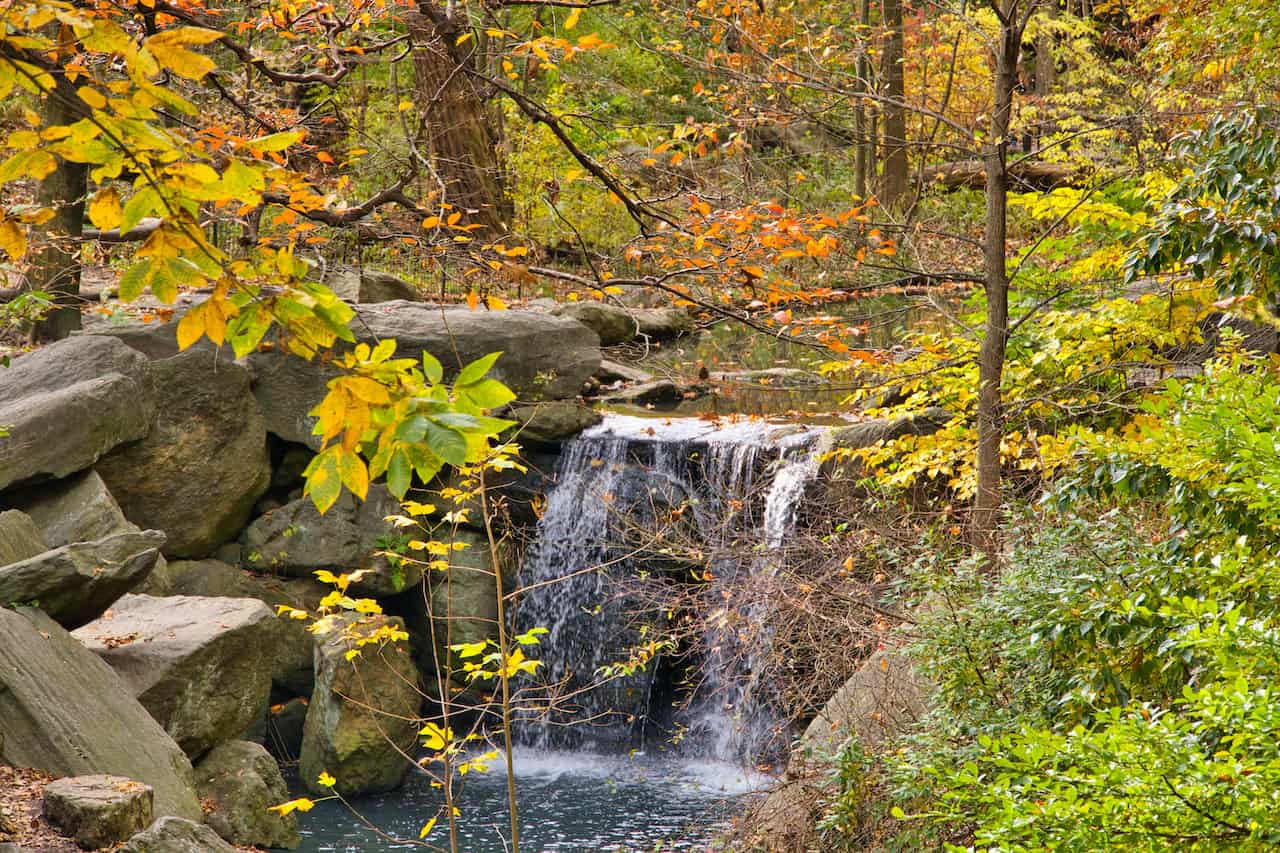 Comparing the Loch waterfall to the other waterfalls in Central Park, there isn’t much of a comparison. Within the Ramble of Central Park, you will find a whole labyrinth of pathways that all seem to be quite confusing.

To be honest, I continuously get myself turned around in the Ramble more often than not. But if you make your way to the Azalea Pond, you will be able to follow the Gill stream that connects the pond with the main water feature of Central Park – The Lake.

Some parts of the Gill are slow moving on flatter portions while in other parts, the stream makes its way down an incline over rocks, creating a waterfall like feature. 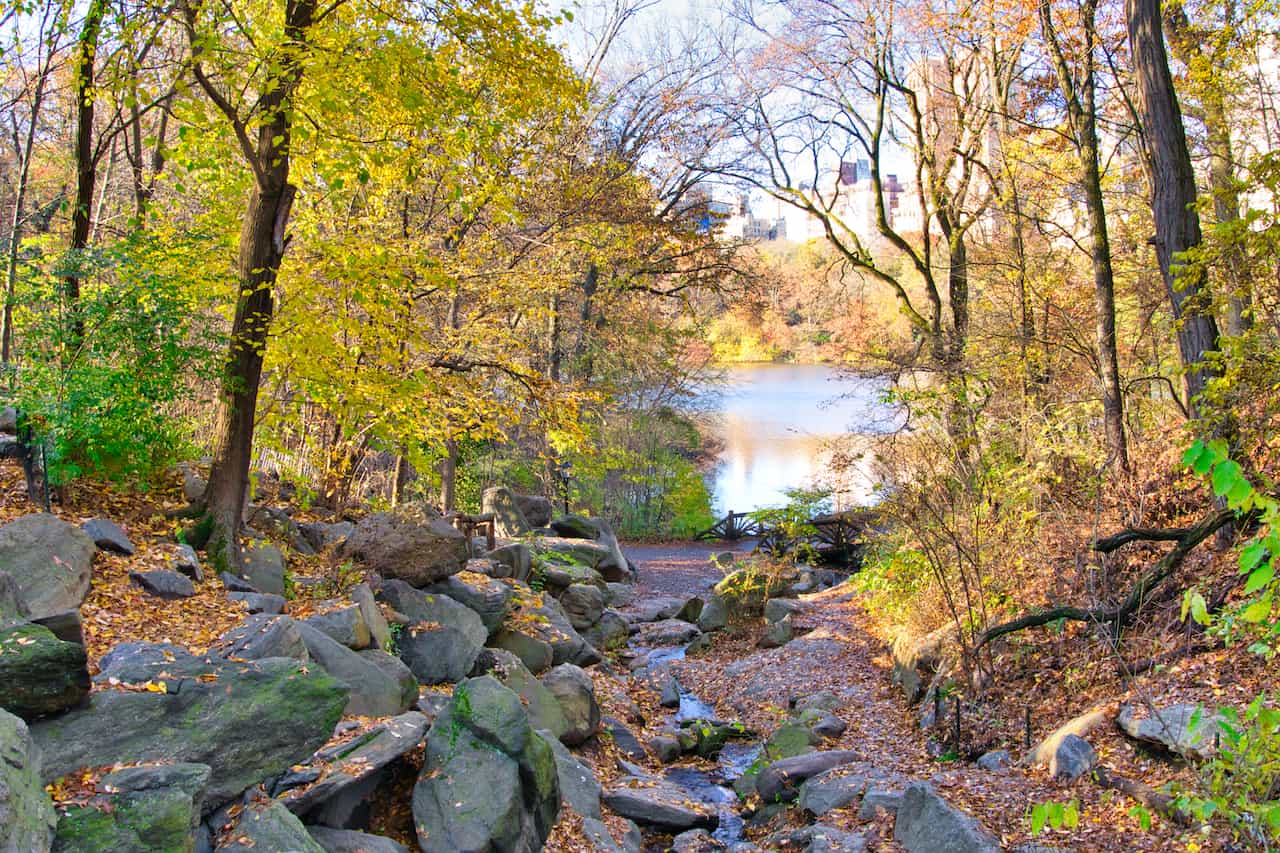 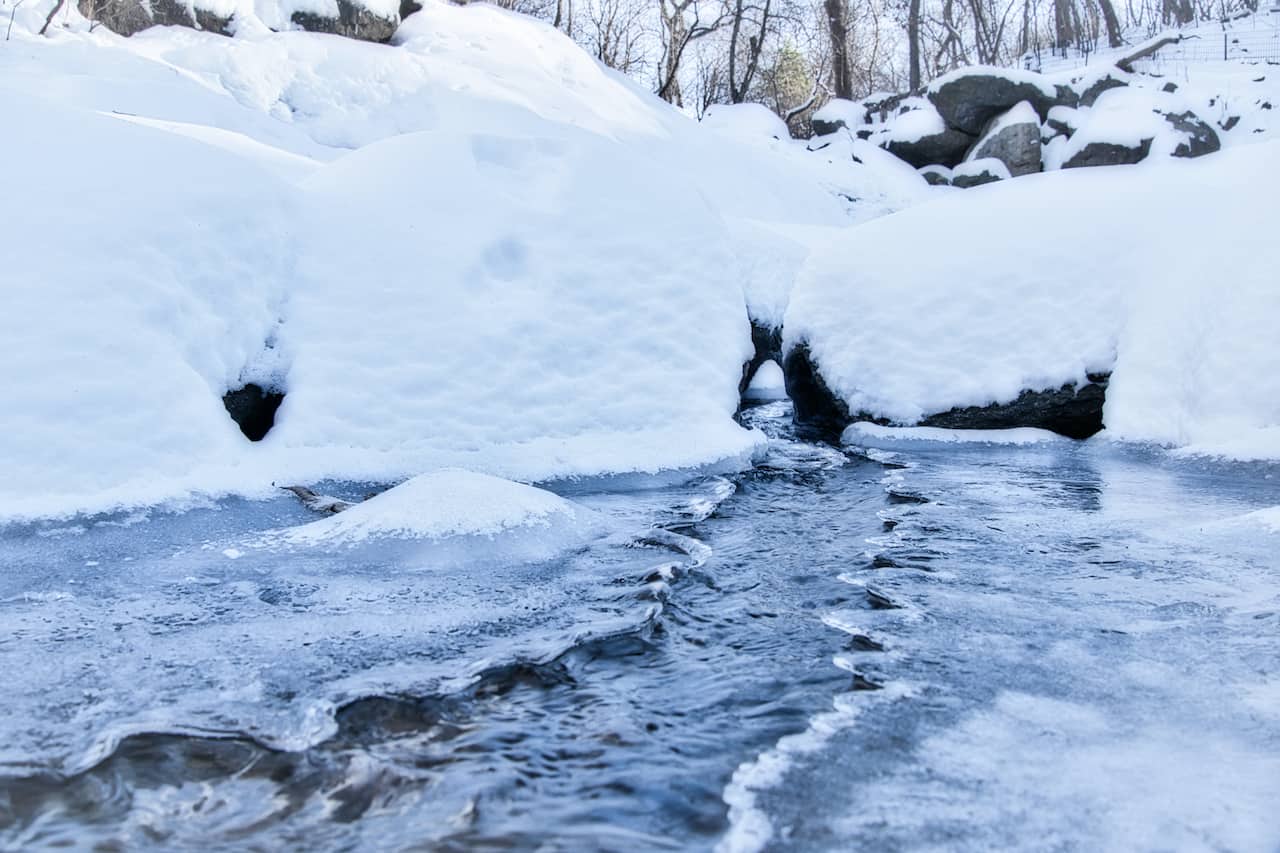 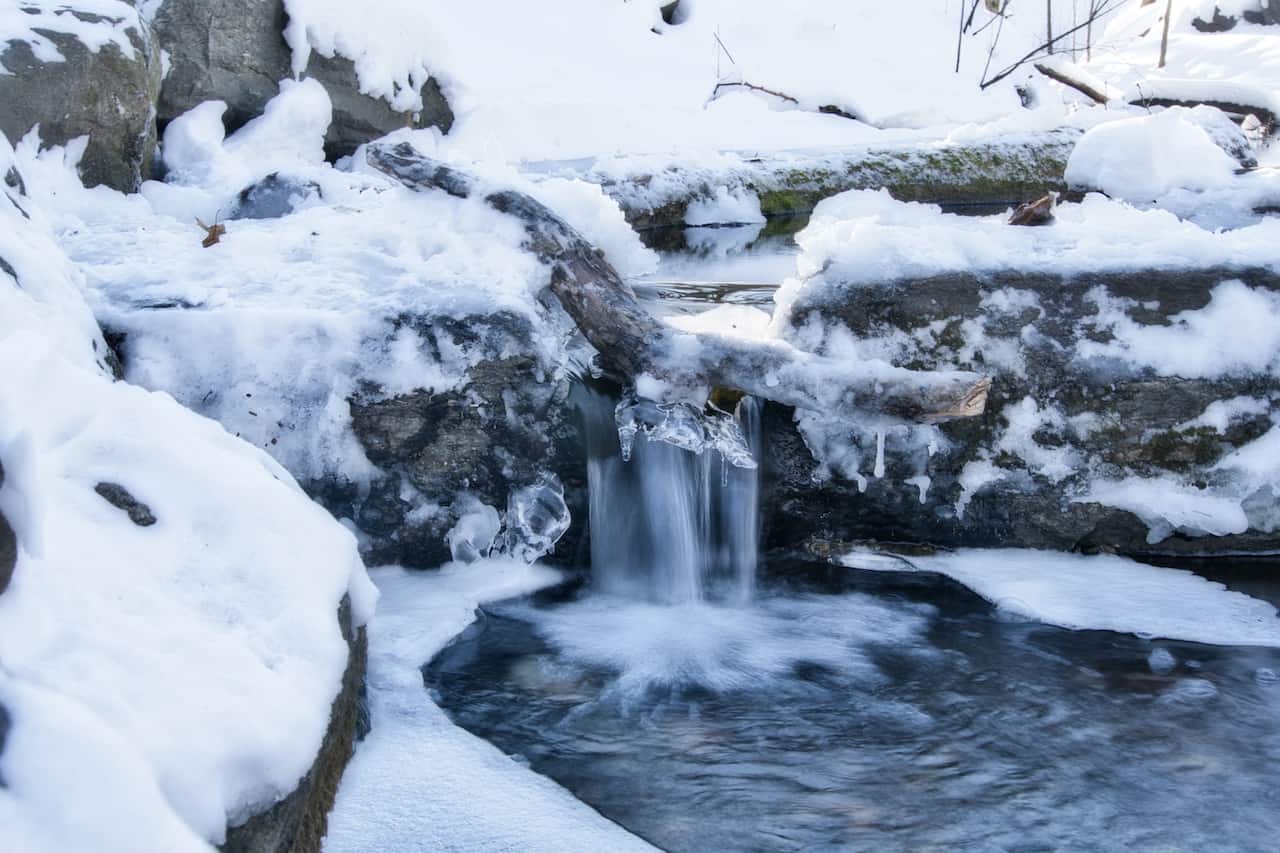 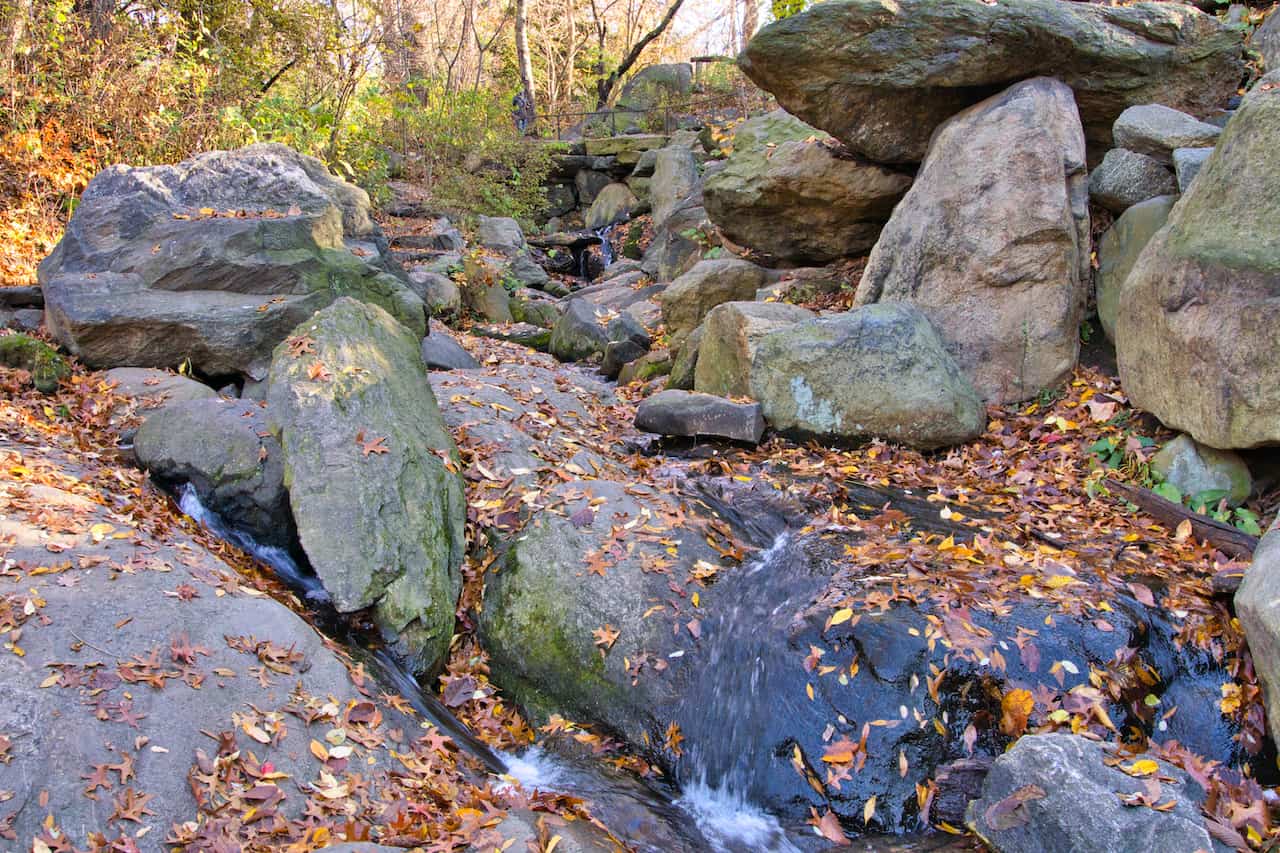 Again, I wouldn’t consider this a true waterfall, but when it comes to Central Park, it is one of the only other options.

After walking along the Gill, be sure to check out some of the viewpoints in the Ramble overlooking the Lake, as well as the Bow Bridge (on the southern end), and the Belvedere Castle (on the northern end).

In the southeast corner of the park, you will find the Hallett Nature Sanctuary. This is actually one of the only parts of the park with a set opening and closing time. This protected area is made up of some winding paths that take you to various viewpoints of the park, the Pond, and the NYC skyline.

Also, in the Sanctuary you will find a waterfall that feeds the Pond down below. Like I said initially, this is a manmade feature and the water is pumped up through the rocks, which then slides down back into the water.

When you enter the protected area, stay to the right hand side and up the pathway. You will see a turnoff to the right taking you to the top of the waterfall. Here you may see some small natural baths that are created by the water. It is a hot spot for birds to cool down in and take a bath.

If you head out of Hallett Nature Sanctuary, and follow the pathway around, you can also get a view of the waterfall from down below. But remember, this is just going to be more of a light trickle of water coming down the rock face.

Although the waterfall may not be up to your standards, the rest of the Hallett Nature Sanctuary is quite nice to walk around and enjoy. 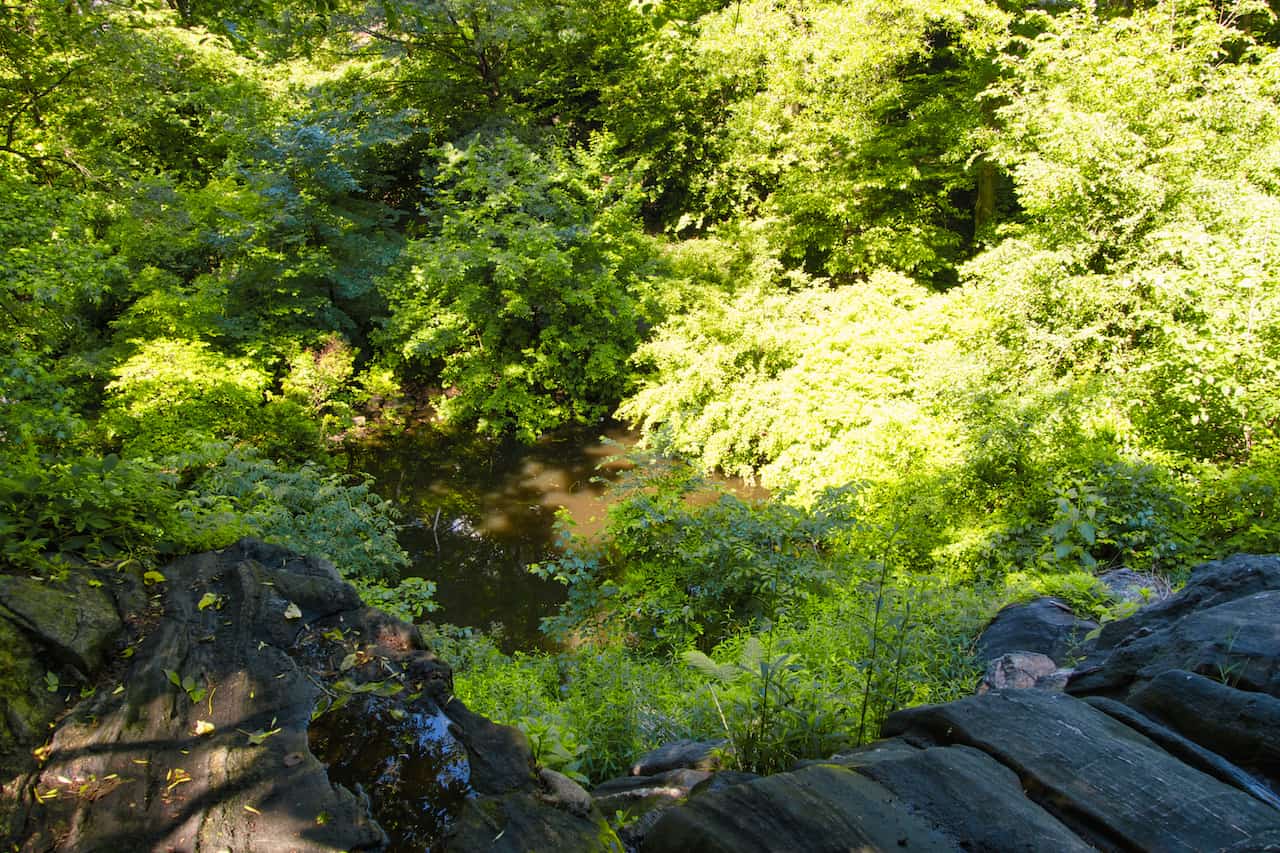 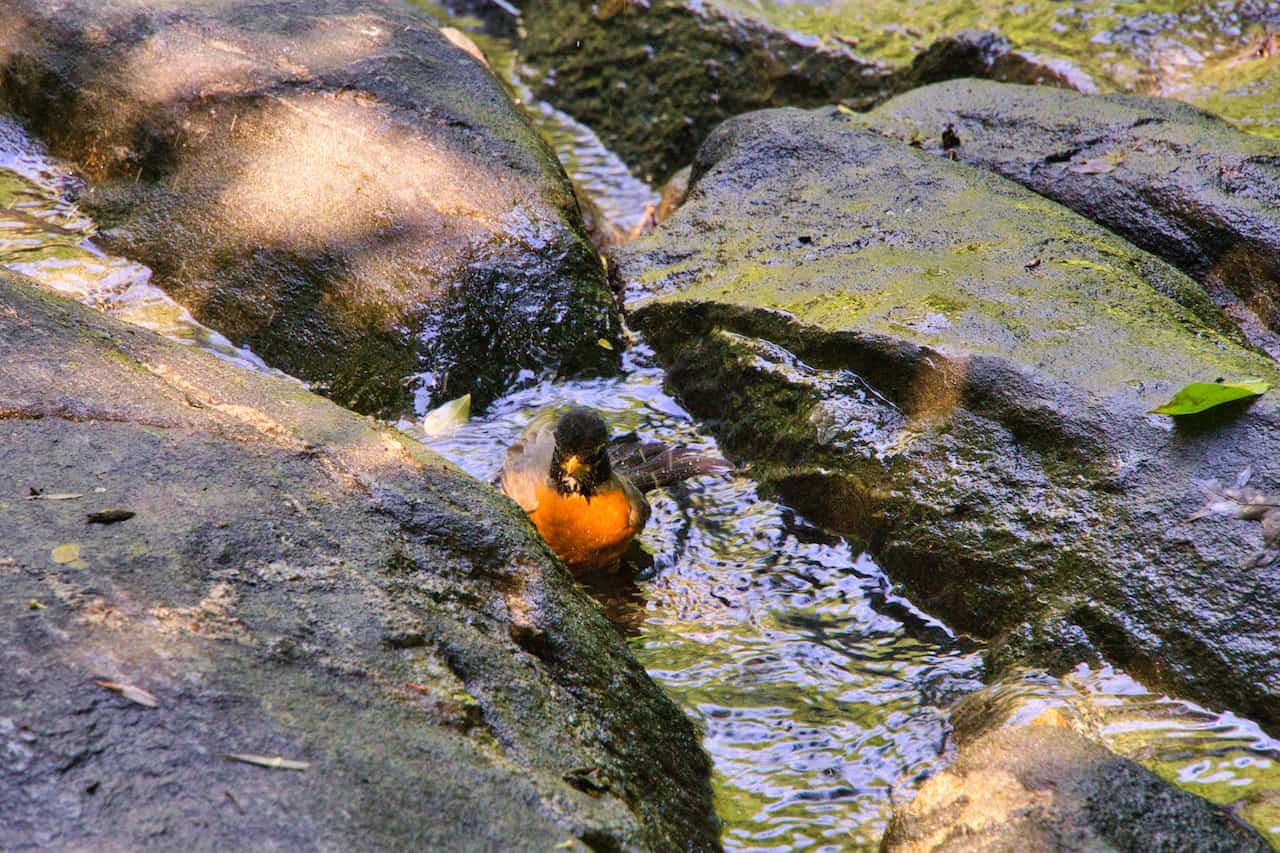 If you have any questions or comments, feel free to add them in below. Also, don’t forget to check out the other New York itineraries and guides up on the site. 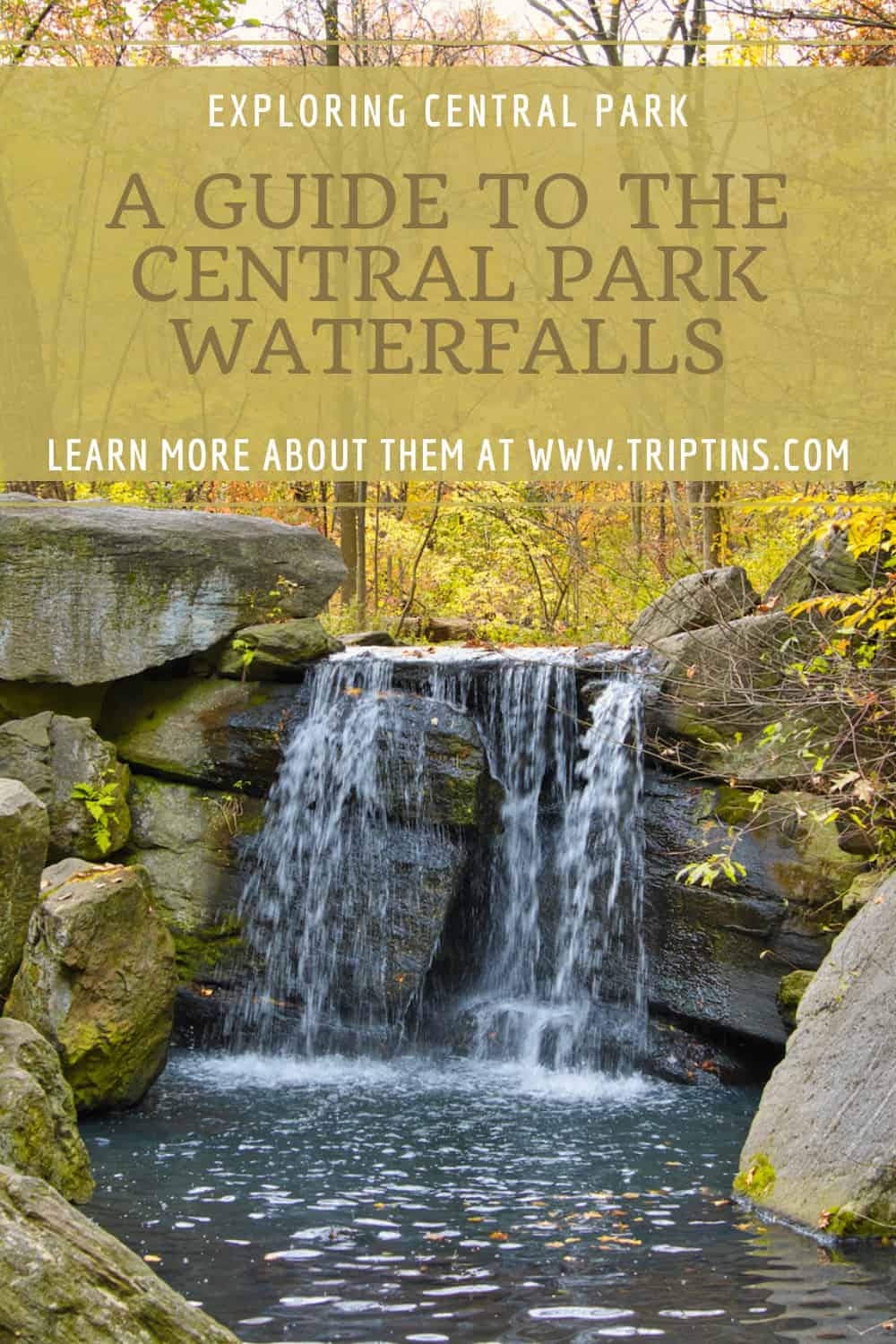