One of my favorite sections of Manhattan’s Central Park is The Ramble. It sits right in the middle of the park between 74 Street and 79 Street, with the Bow Bridge to the south and Belvedere Castle to the north. In between you can find a 38 acre area full of winding trails, plenty of greenery and trees, and a variety of wildlife. Read on to learn more about The Ramble and all you will need to know for a visit.

1) Background of The Ramble

There are only a few areas in Central Park where you can find a whole labyrinth of forested trails. You have the North Woods all the way up at the northernmost portion of park, the small Hallett Nature Sanctuary in the southeast corner, and of course The Ramble, located in the center of the park.

In The Ramble you will have the opportunity to enjoy a woodlands landscape, where you will not even feel like you are in New York City.

The Ramble was created by Central Park designers – Frederick Law Olmsted and Calvert Vaux – as a rural escape from the bustling city of Manhattan that surrounds it. This area was designed to replicate the landscapes of the Adirondacks and a way to truly be entrenched in nature.

The Ramble is not just a forested area with trails running through it. You will find several highlights including the Azalea Pond, the Gill stream, stone arches, over 200 bird species, and even a hidden cave.

There is just so much to explore during a visit to The Ramble and it is a great add on to any visit to Central Park. 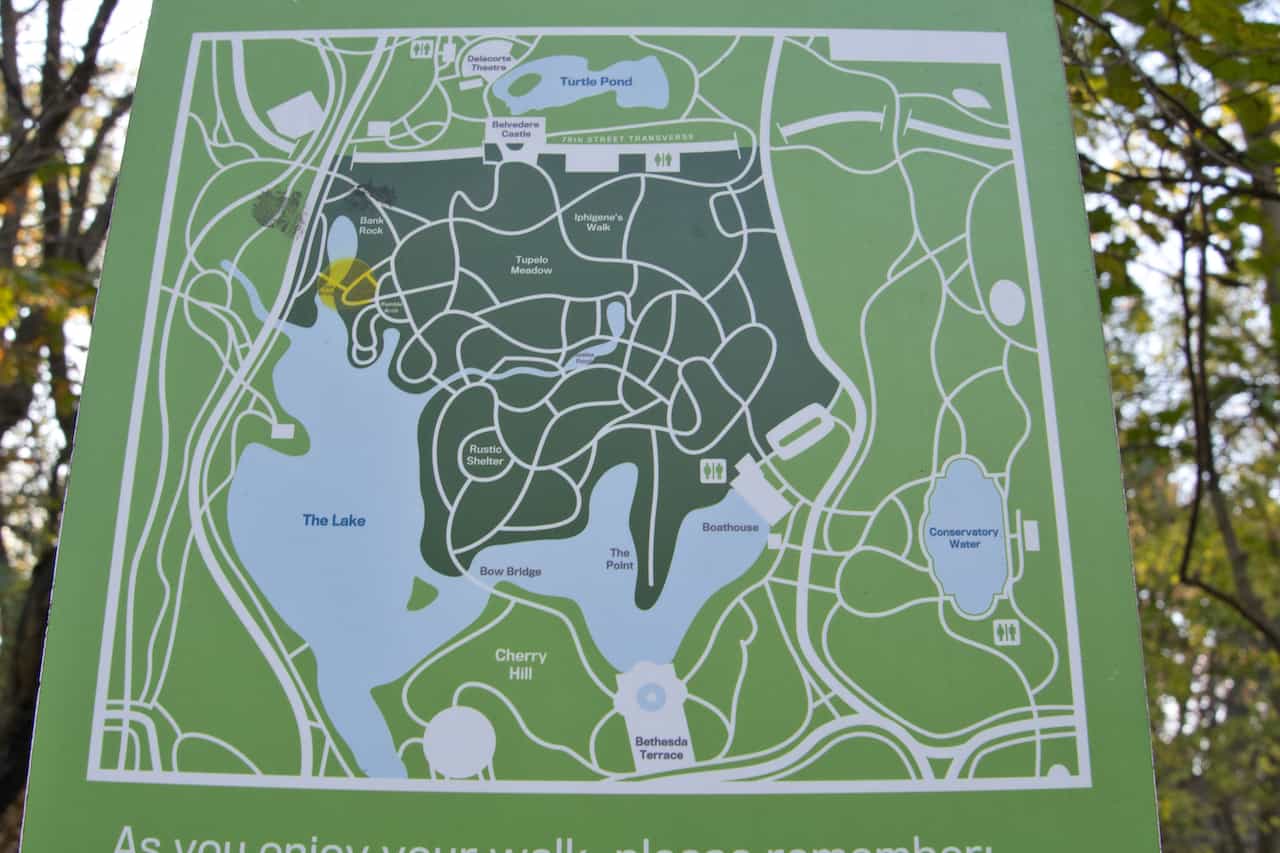 1) Dogs must be leashed at all times while in this area to protect against any potential damage to the flora and fauna.

2) You cannot ride your bike through The Ramble. If you are biking through Central Park and end up in the protected area, you just need to get off your bike and walk through with it until you exit.

2) Where to Stay in Manhattan

One important thing to note about The Ramble is that the trails and pathways that make their way through it can get very confusing. Odds are you will be walking in circles at one point or another as you wander your way around the area.

Below is a screenshot of The Ramble that shows the whole variety of winding trails. I have also pinpointed some highlights of The Ramble, which I will get into throughout the remainder of this guide. 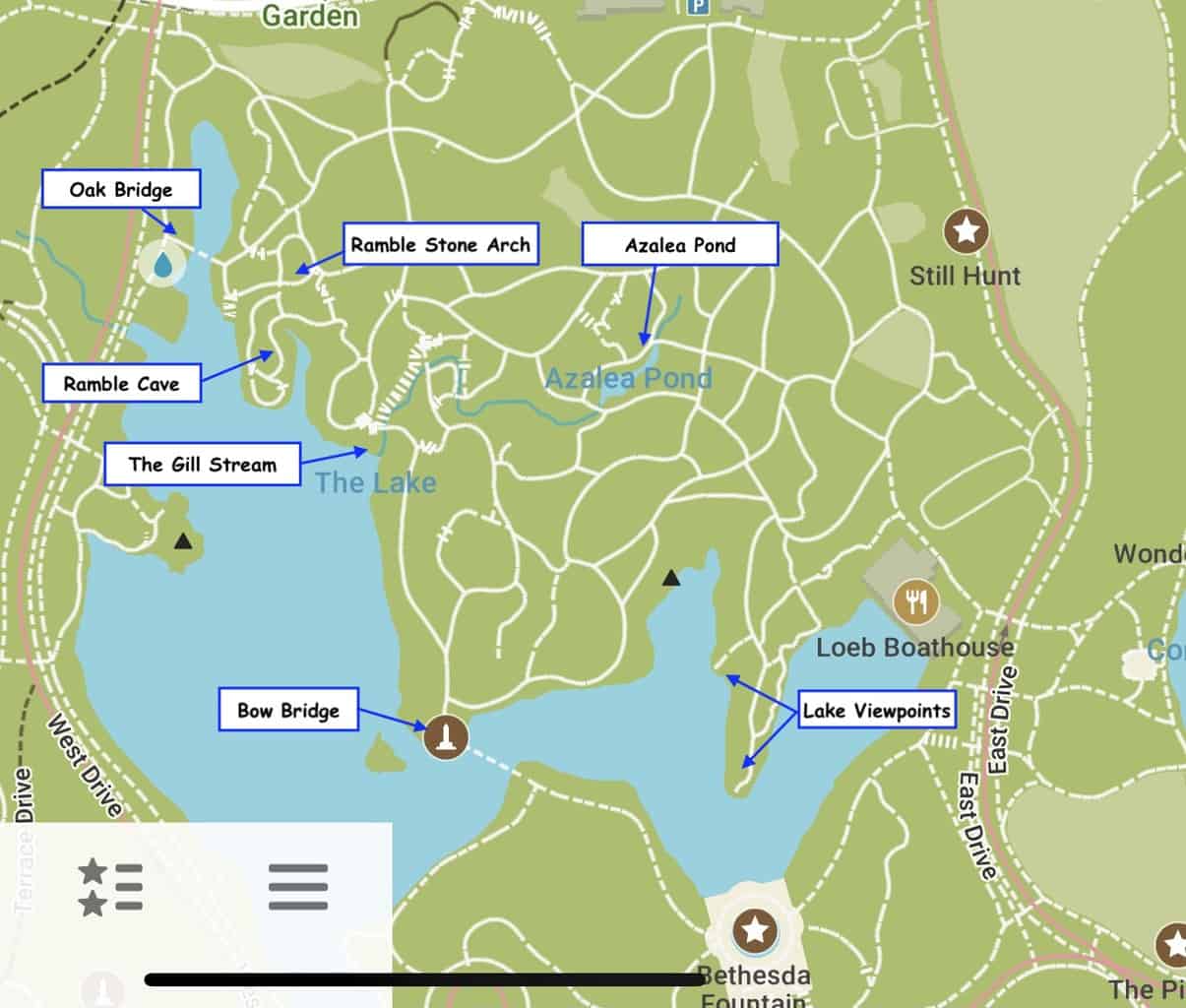 4) How to Get to The Ramble

The Ramble can be accessed from several different entry points on all sides of the park. Below is a Google Maps view with many of the main entrances starred.

One of the more popular entrances to The Ramble is to head right across the Bow Bridge near the Bethesda Terrace, where you will then end up in the southern end of the area.

If you are heading along West Drive, you can enter from the northwest part of The Ramble as you make your way across the Oak Bridge

You can also make your way into The Ramble right next to the Loeb Boathouse at the southwest corner of the area.

You can also enter from a couple spots along the 79 Street traverse. You can do so from the intersection of 79 Street and East Drive. Or if coming from Belvedere Castle you can head down right behind it to the traverse and cross into The Ramble from there.

While most of The Ramble can simply be enjoyed by getting lost and walking its trails, I did want to point out some of the top highlights to be sure to visit while exploring the area (as I pointed out in the map above).

One of the main features at the northwest part of The Ramble is the Ramble Stone Arch. The stone arch was built back in 1863 and measures just 5 feet wide. You can head under the arch and across the top of it as you make your way around the area.

Another interesting thing to note here is that on the east side of the arch, is where one of the entrances was to the infamous Ramble Cave. In the 1930’s, the entrance was covered with dirt and essentially hidden into the hillside. 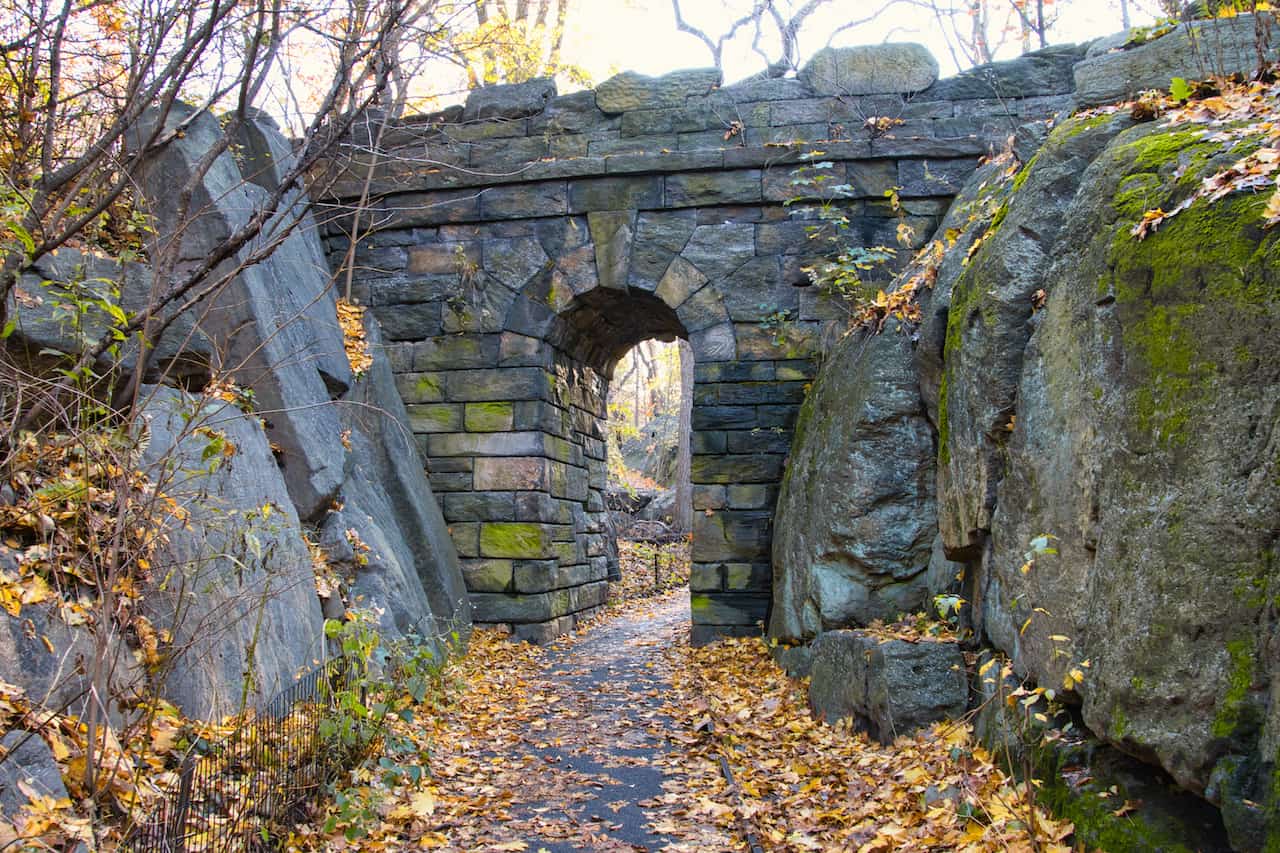 Speaking of the Ramble Cave, you can still get some idea of what used to be there back in the day. If you cross under the arch, head up the stairs to the right and then follow the path towards the water, you should see a steep staircase on the other side of railing that leads down to the waterfront.

Here is where the other entrance to the Ramble Cave was located before being covered up with stones. While you can’t actually visit the cave since it is boarded up, it is still a pretty unique part of the park to visit. 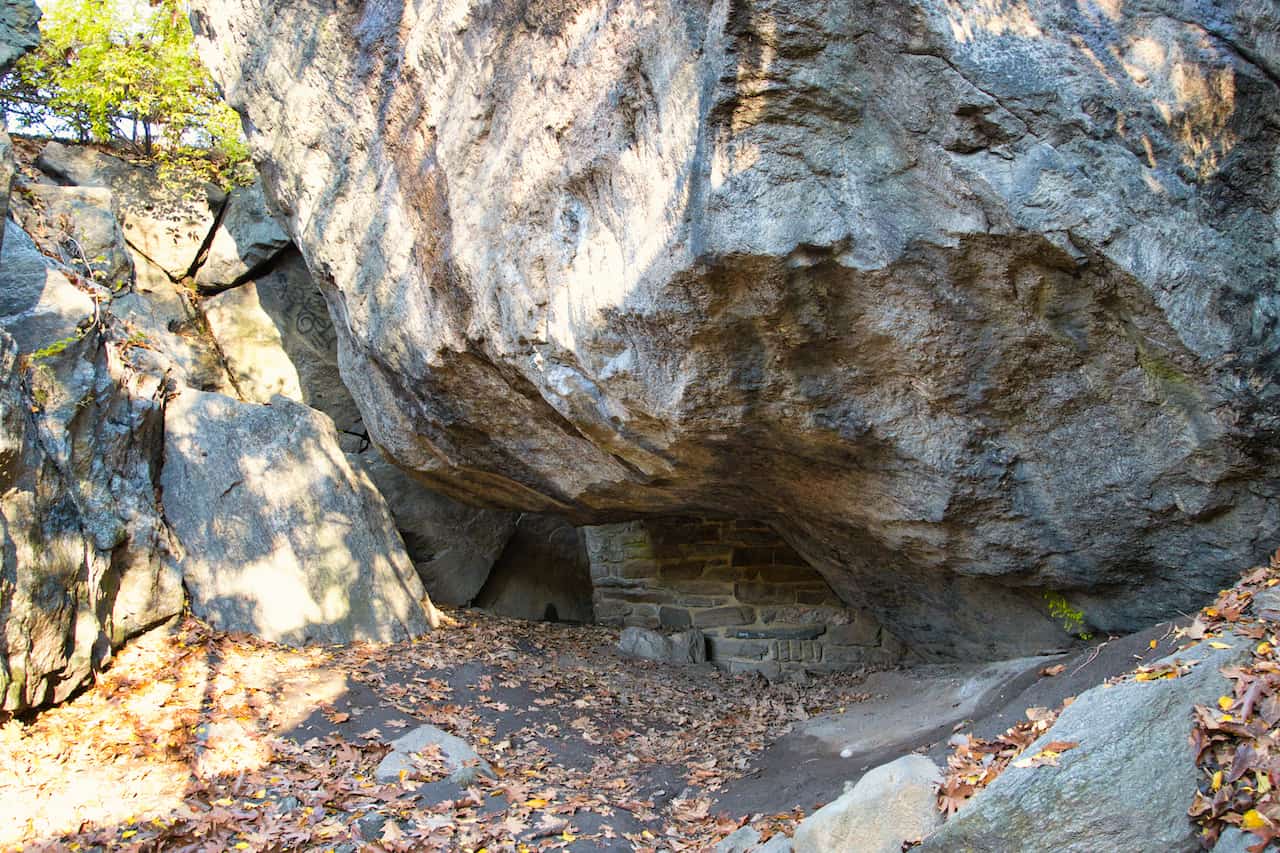 Also in The Ramble you can find a man-made stream called The Gill. The stream winds its way through the center of The Ramble connecting the Lake and the Azalea Pond. Towards the southern end of the stream you will find a small cascading waterfall that flows down the rocks and ultimately into the Lake.

It is a relaxing walk to take along the flowing water as you make your way between the Lake and Azalea Pond area. 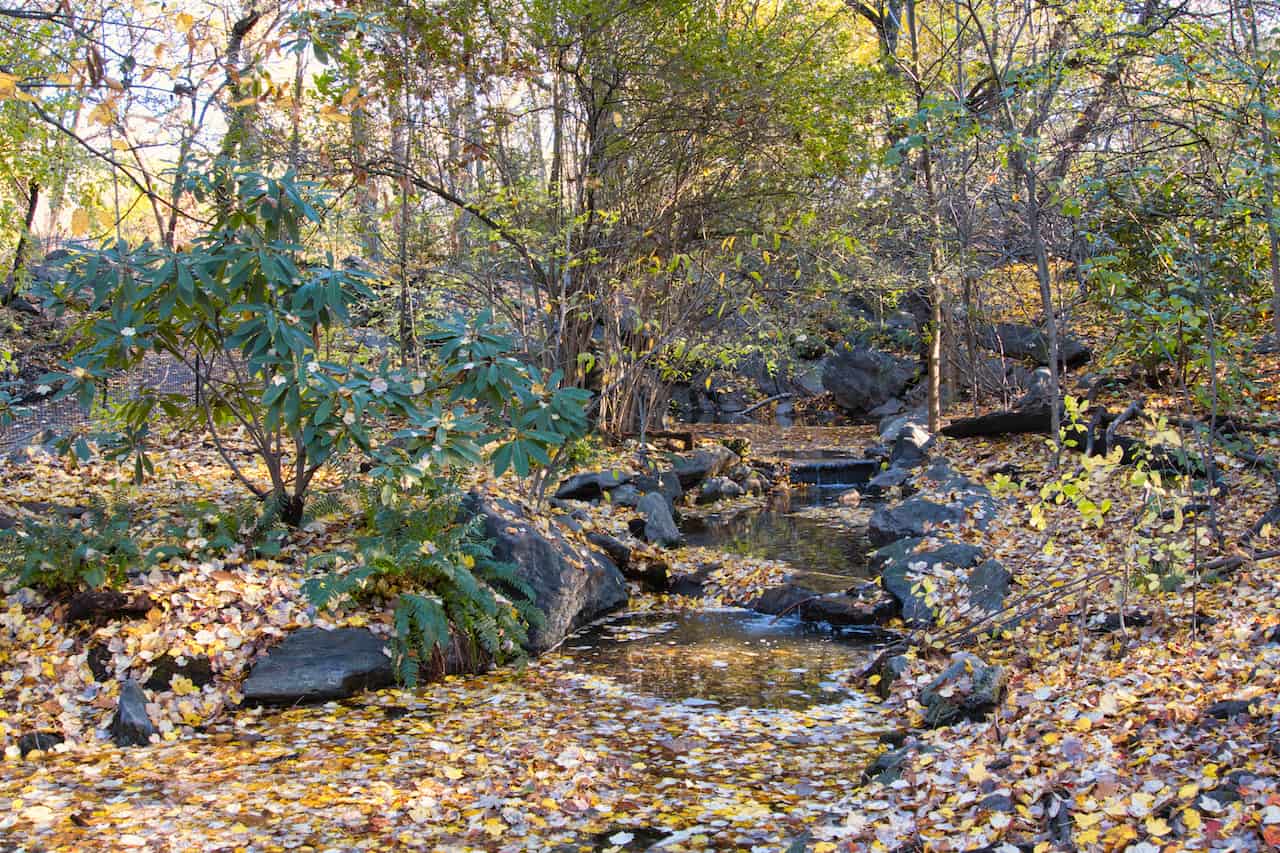 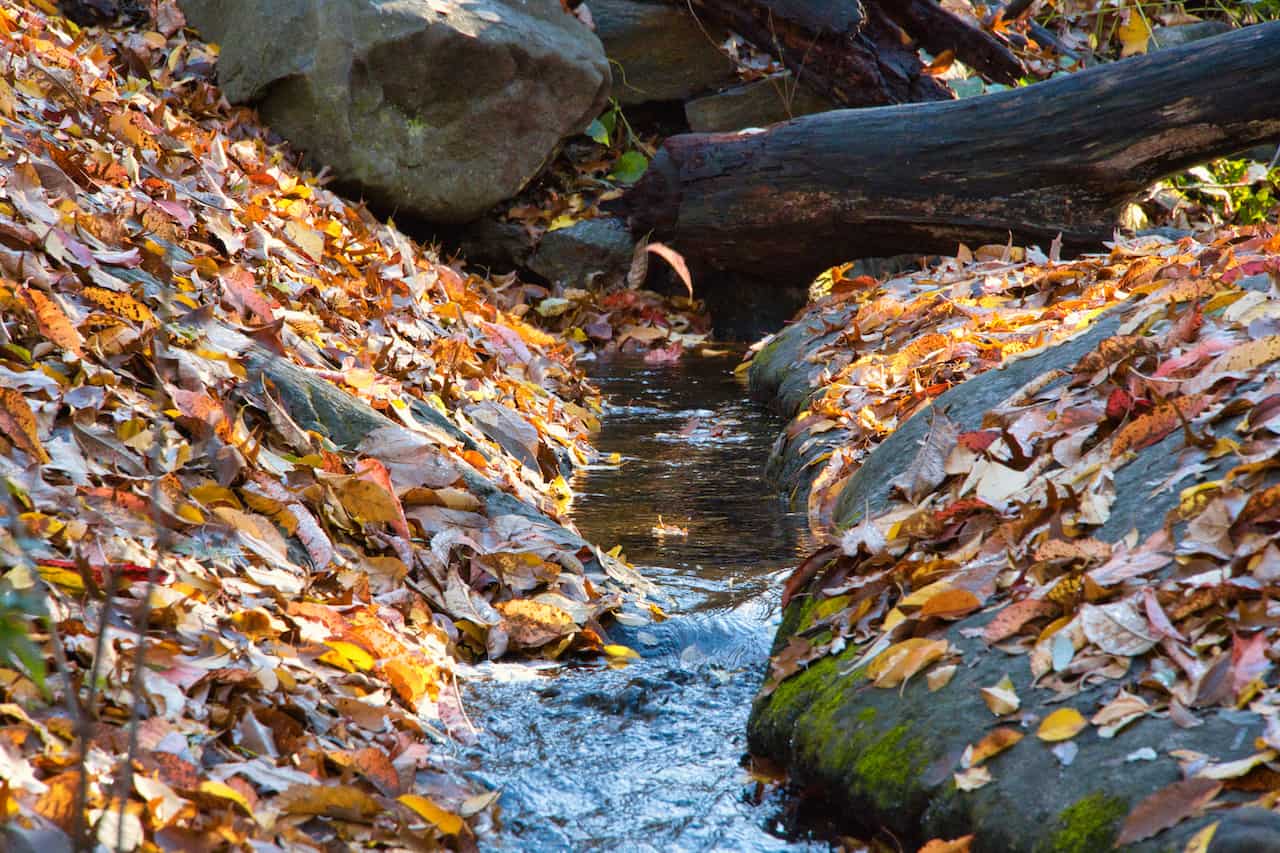 The largest body of water within The Ramble itself would be the Azalea Pond. The Gill stream starts just beyond the pond, before widening into the pond itself and then emptying out in the Lake.

At the Azalea Pond you will find one of the hot spots for bird watching in all Central Park. The spring time is a great season to visit when the pink Azalea flowers bloom around the lake.

Near the Azalea Pond you will also find the rustic Azalea Pond Bridge that heads over the Gill. 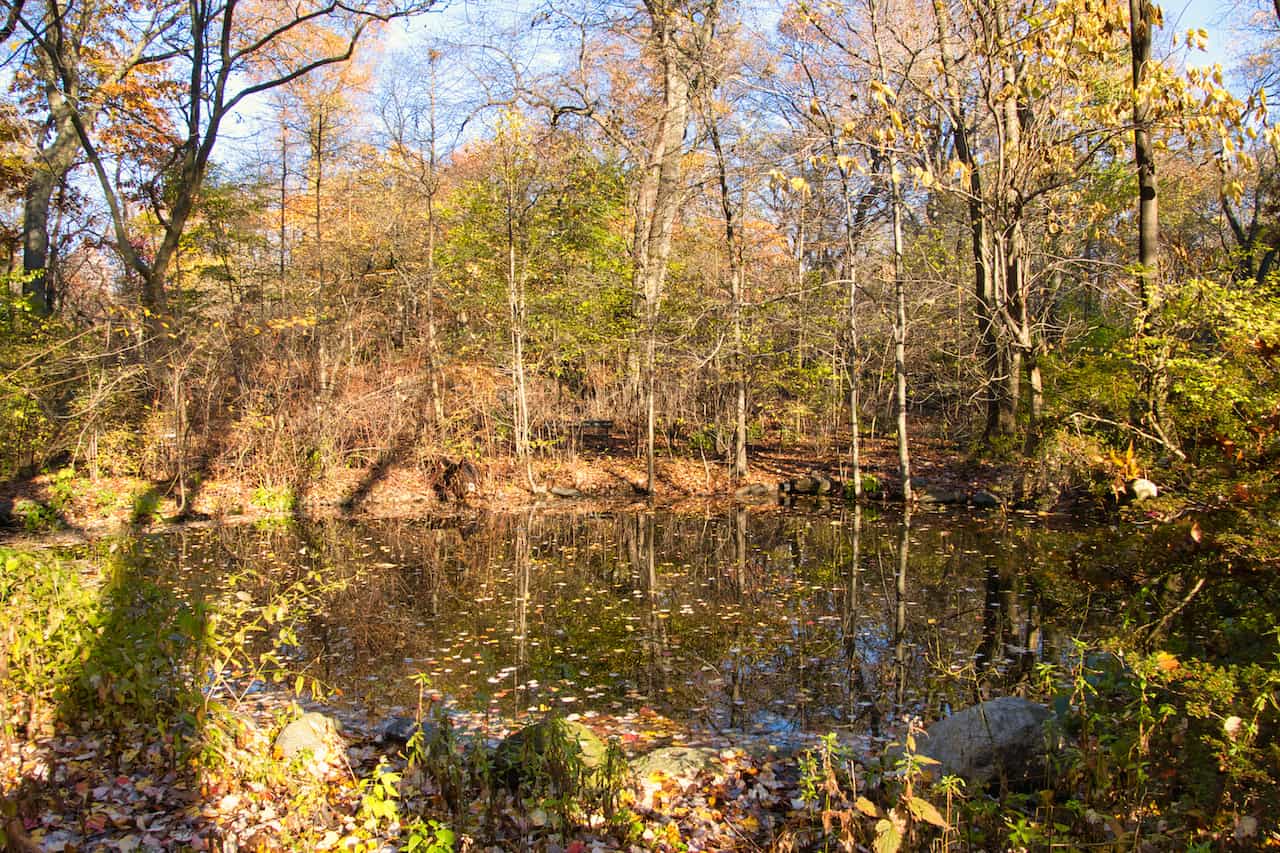 As mentioned a few times before, bird watching is probably the most frequent activity that you will come across in The Ramble. It is common to find many small groups of bird watchers taking their time to listen to and photograph the 200+ species of birds that call Central Park home.

You will also find an area right near the Azalea Pond with several birdfeeders in the trees. This is a great spot for anyone to sit back and enjoy just some of those bird species all in one place. 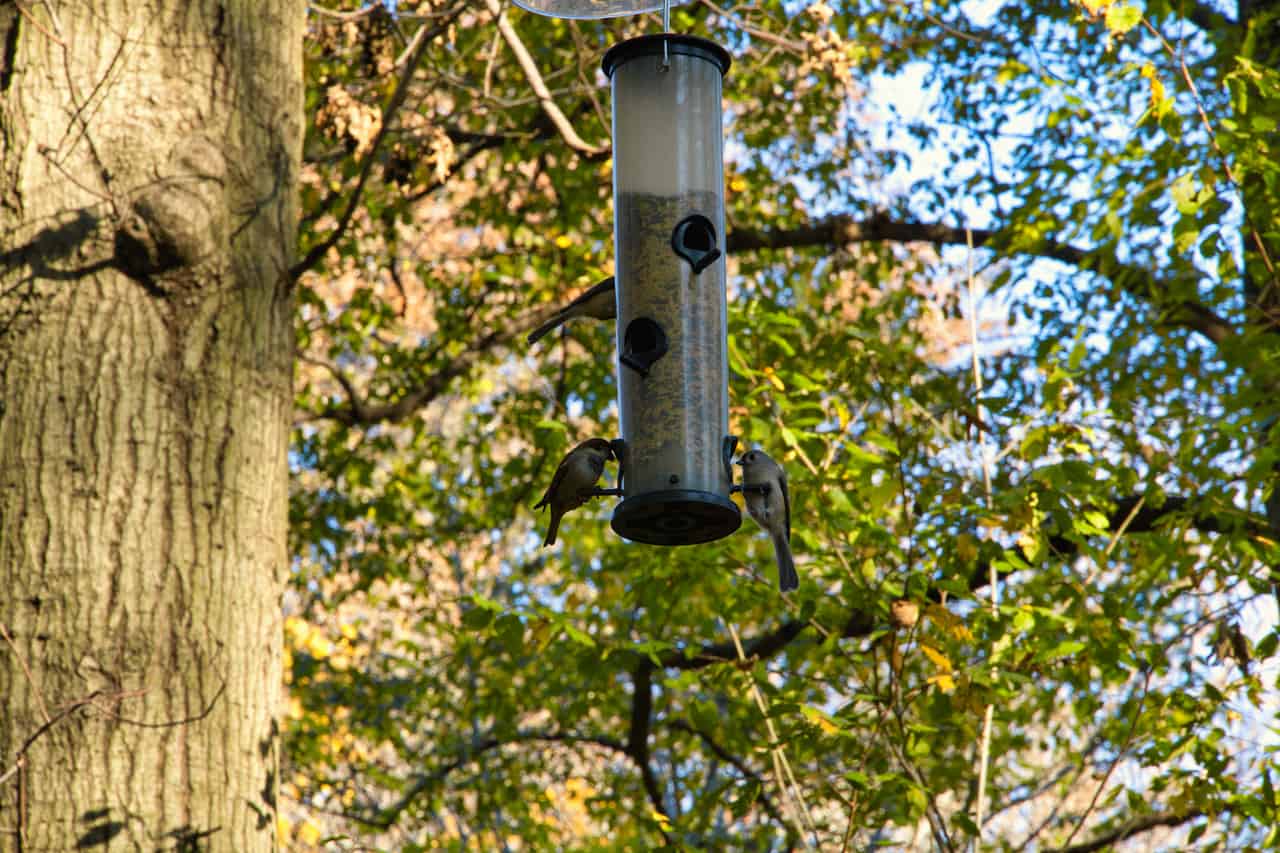 If you head closer to the southern end of The Ramble near the Loab Boathouse you will find a small peninsula jutting into the Lake itself. There are a couple of paths on the peninsula with various lookout points onto the Central Park Lake as well as the Bow Bridge out in the distance. 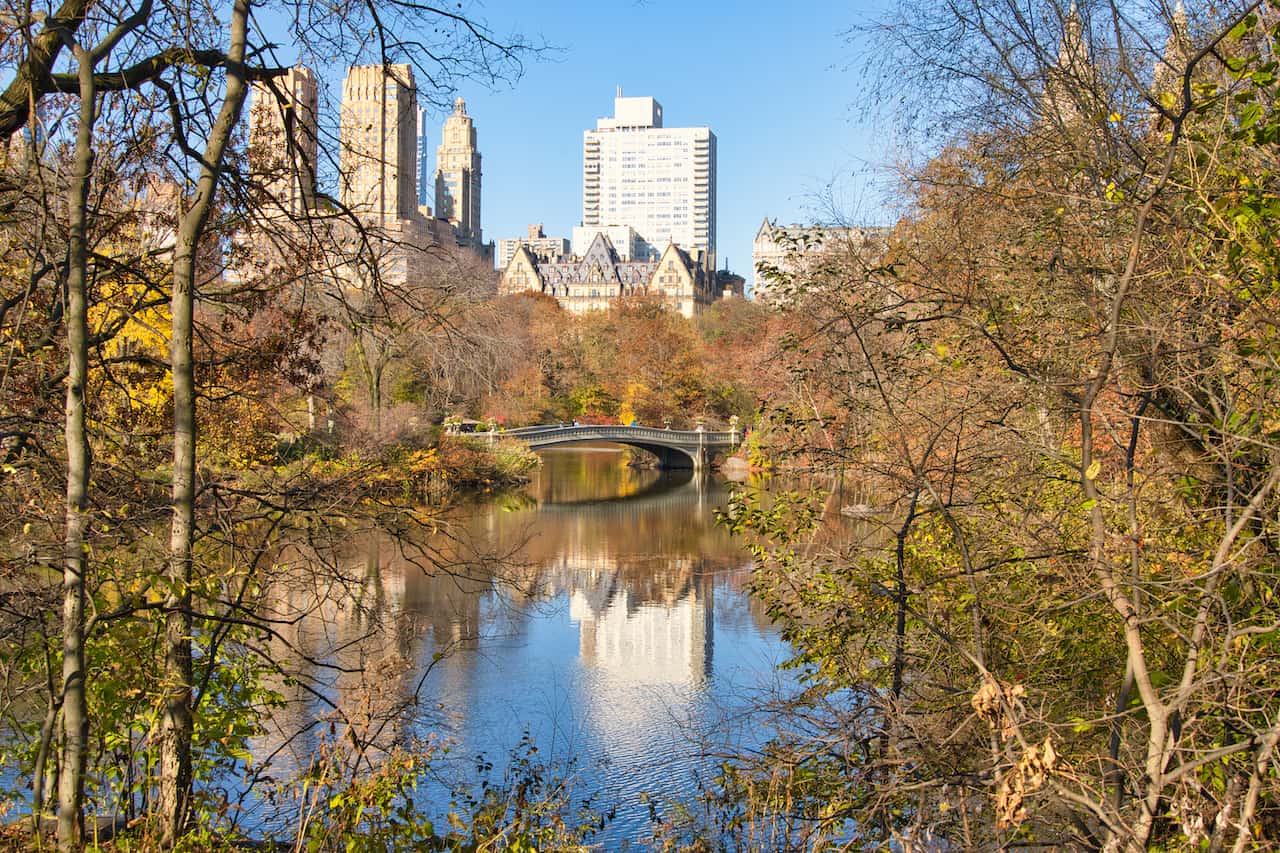 Of course, throughout seeing any and all of the above places within The Ramble, you are sure to get lost on all the various walking paths. It sure can get confusing in there as you walk in circles but it is all part of the fun of being in the forest surrounded by the variety of flora and fauna.

I should also note that many of the paths also have benches or seating areas, where you can sit back and relax. There are also a few more open areas of The Ramble with small fields, if you wanted to sit down with a group in a quiet place in the park. 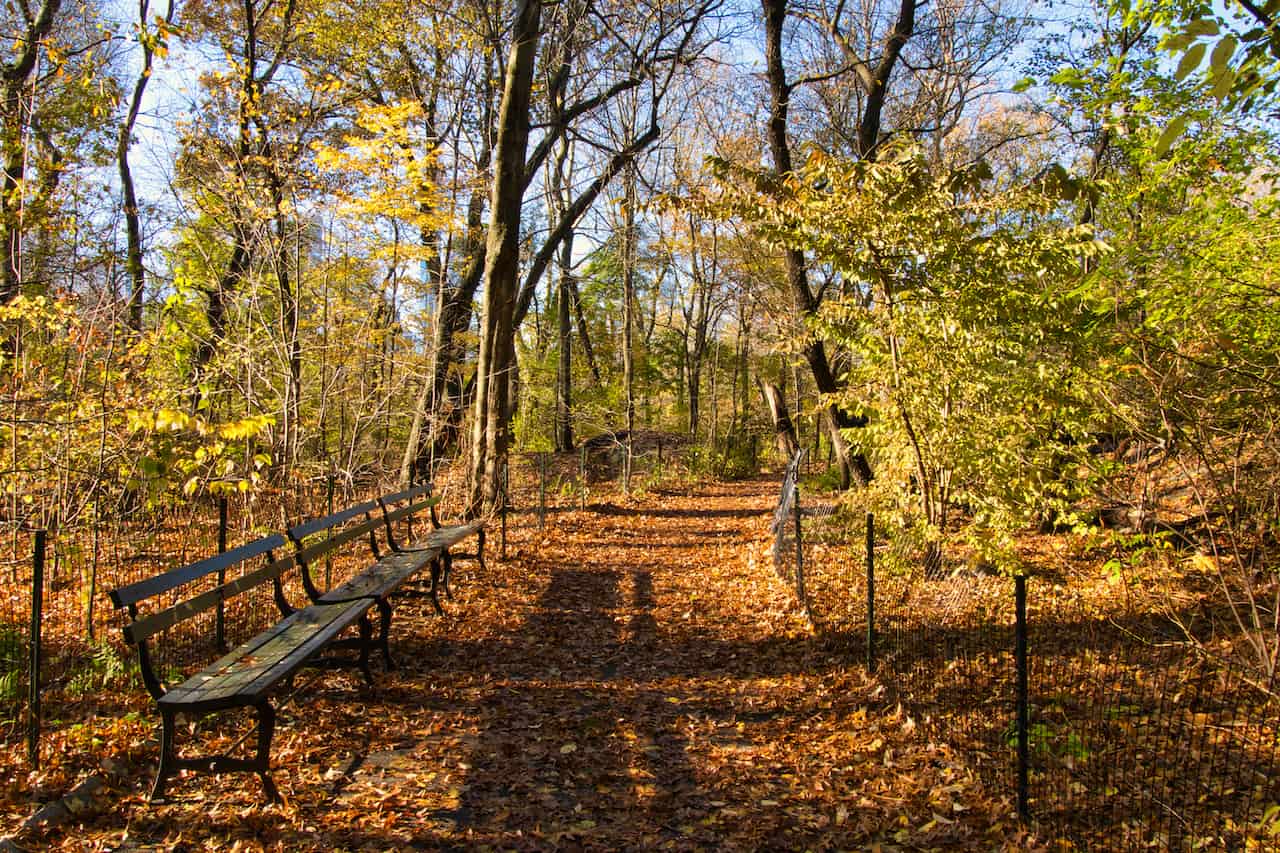 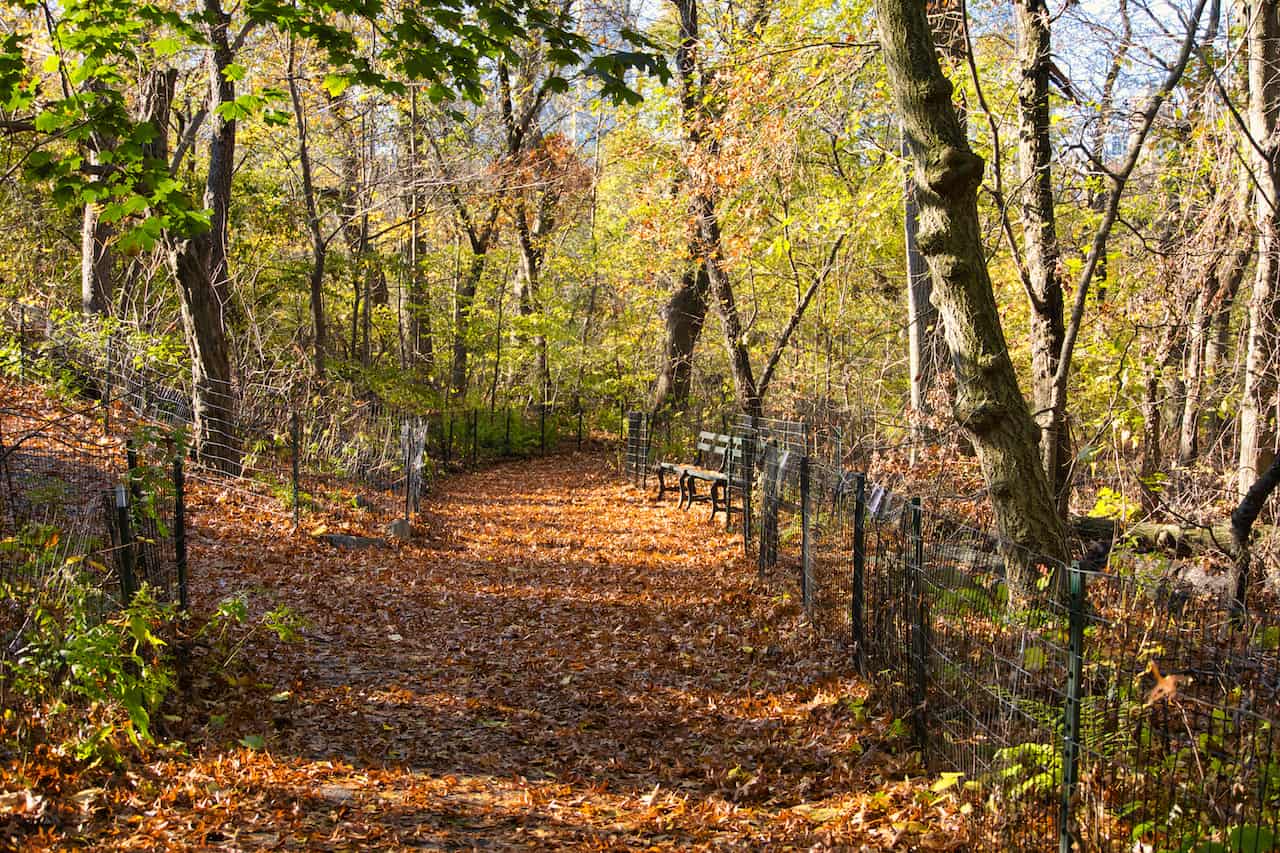 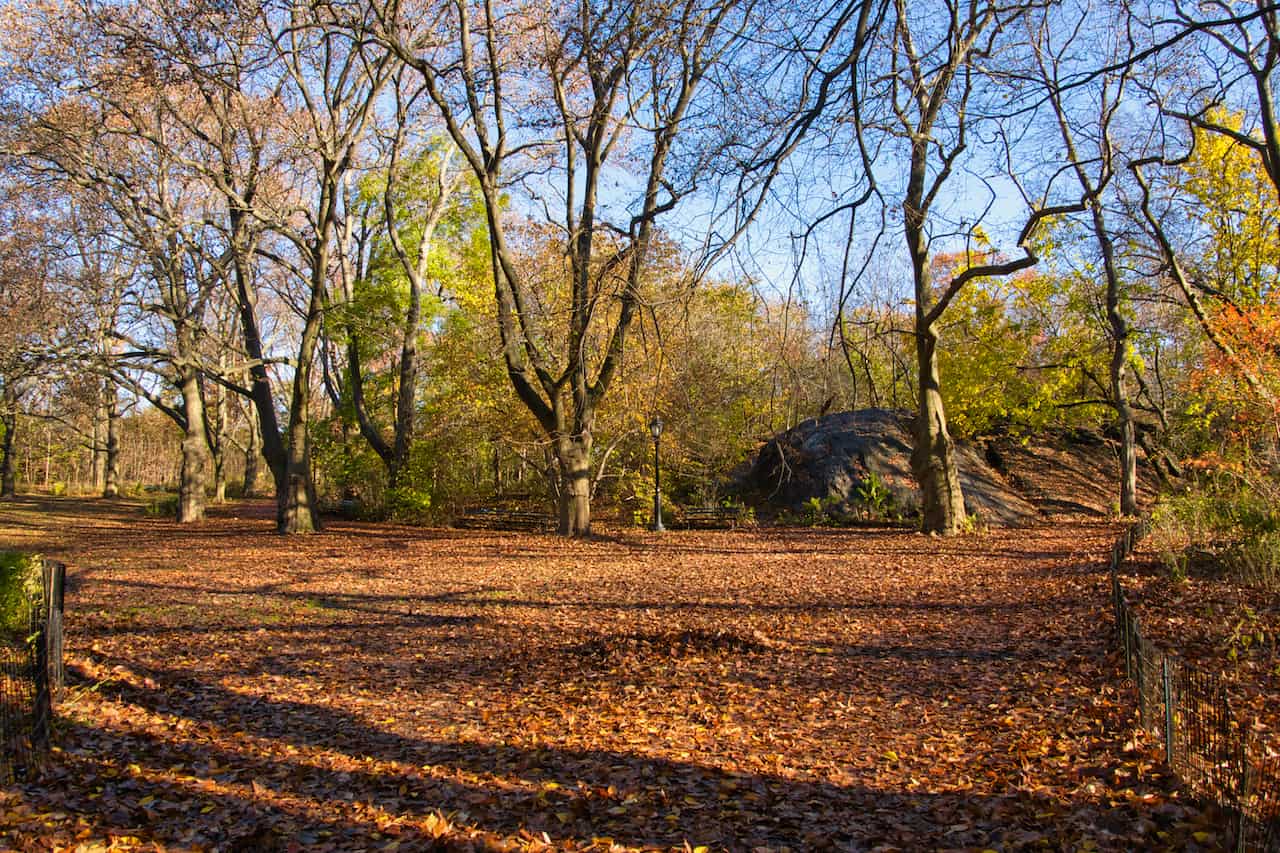 As you can see, The Ramble offers a whole lot to its visitors and is a great way to spend a couple hours exploring Central Park. There is also so much more to explore in the park and it can take days navigating all of the different corners.

If you have the time I would highly recommend heading to the Reservoir Loop Path and/or Bridle Path Route, both of which take you along some of the best portions of trail in the park.

Learn about all of these and more by checking out the other New York travel guides I have up on the site, like the one about Walking the Brooklyn Bridge and the Manhattan Bridge Walk.

As always, feel free to write in any questions or comments below. Have fun out there and safe travels! 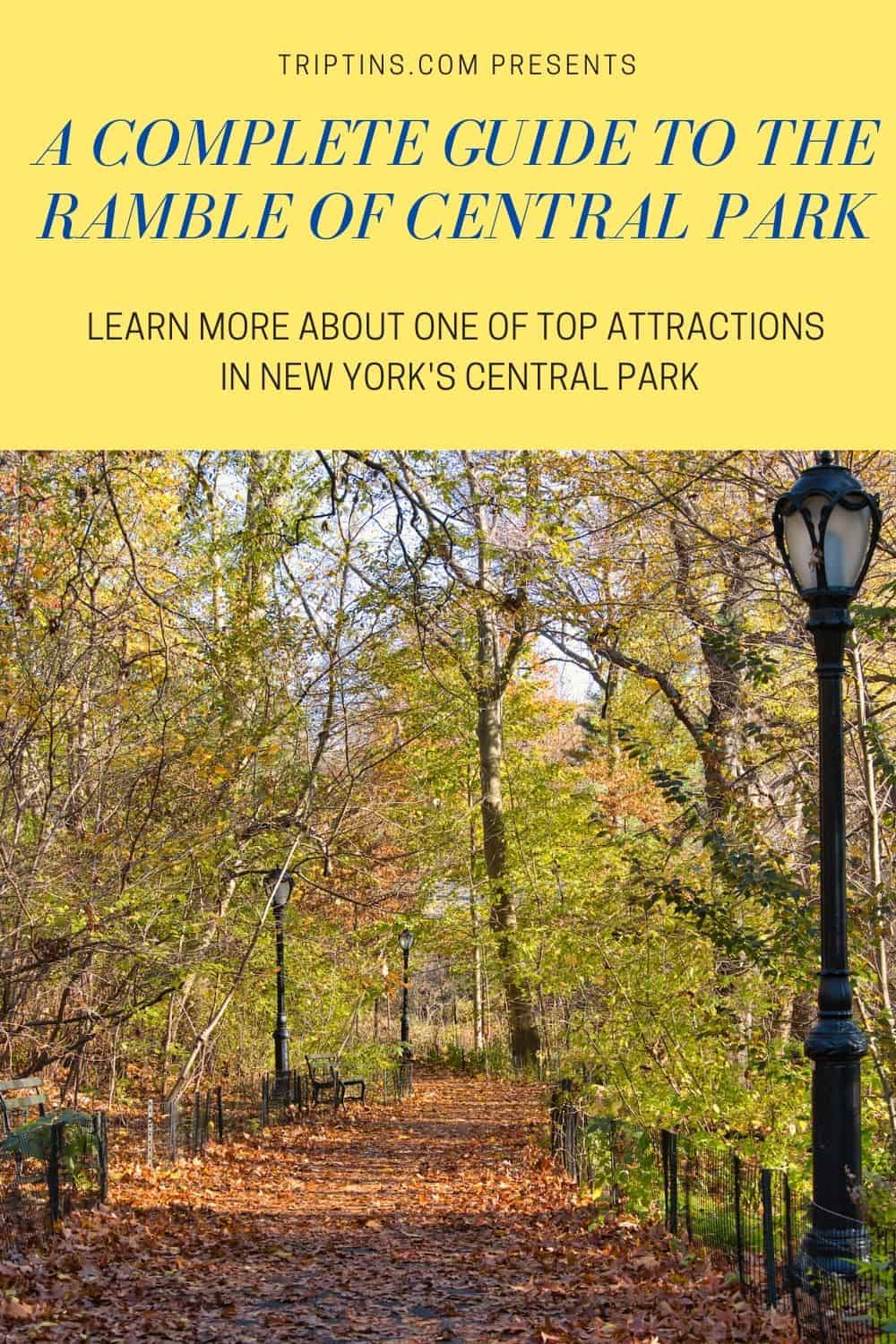 I came across this article,(great read thx ) which like many articles, keep me inspired as I try to tackle this project I've been overwhelmed by. I run the park almost every day an with a fashion back ground was inspired to make a merch and apparel line after Olmsted vaux and company namesake..

So many nooks and crannies of details just on central park alone.. endless material

Thanks again for read an continued inspiration

I got hopelessly lost in the Ramble. But I got some beautiful photos.

That sounds like what usually happens with me too!