Central Park is full of various running and walking paths, however the Central Park Bridle Path is one of the top to choose from. This 4.2 mile soft gravel/dirt path starts in the south of the park, heads through tunnels and past plenty of foliage, before looping around and past the famous reservoir. This guide will go into detail on how to take part of the Bridle Path for yourself and what to expect along the way.

1) What is the Central Park Bridle Path

While there is the main paved running/walking loop in Central Park (West and East Drive), the Bridle Path is a great alternative to get off the concrete and apart from the crowds.

For those that want a softer surface and get away from the hectic main loop path, the Central Park Bridle Path can be a great alternative.

The Bridle Path is 4.2 miles long and is mostly all on a softer dirt surface that weaves in and out of the west side of the park before looping around the reservoir area.

While the path is separate from the main Central Park loop, there are several instances where the path goes right alongside the loop path. This allows you to hop on and off the path if you don’t want to take part of the entire thing or if you are not entering the park near the starting point of the Bridle Path. 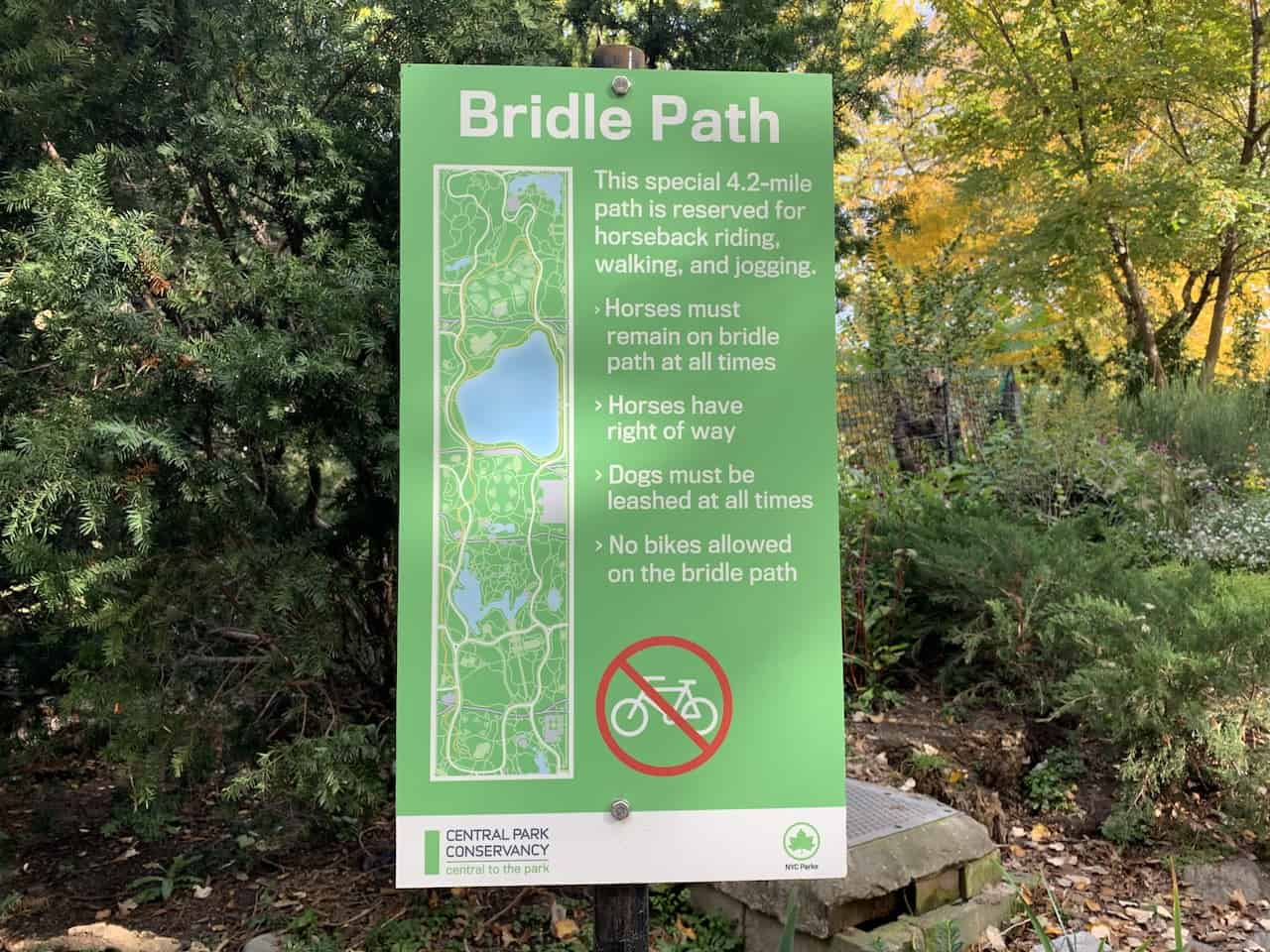 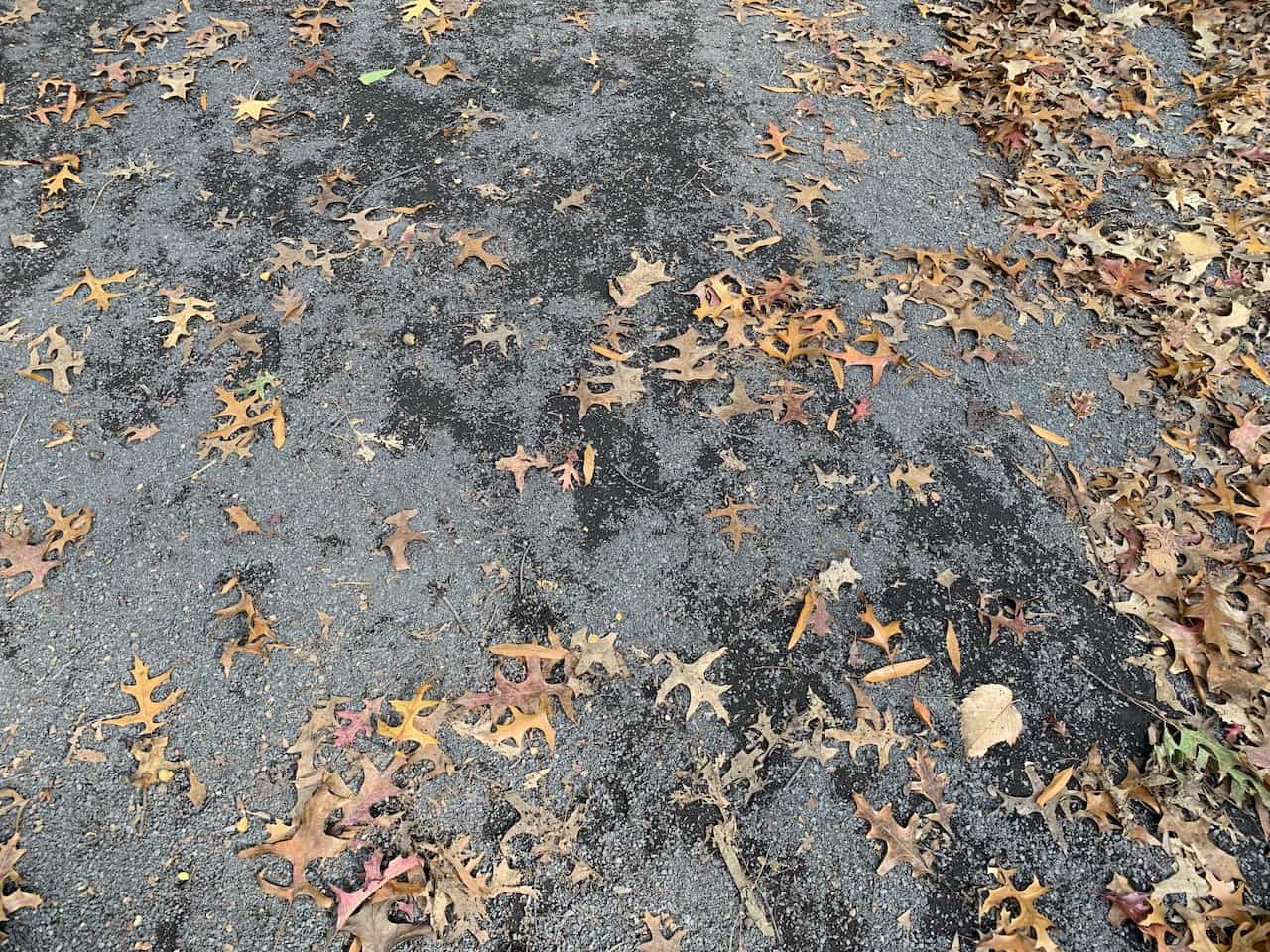 Below is a screenshot from the Maps.me app of the Central Park Bridle Path map. I would recommend downloading the app to get a better sense of the various paths in the park and it will have you going in the right direction.

I have highlighted the route in pink, but on the app itself you will see the Bridle Path marked with a dotted black line (vs. the various white dotted lines that you will see throughout the remainder of the park).

You can see the path starting in the southwest corner of the park, heading north towards the reservoir, and then going counter clockwise around it.

On the north side of the reservoir you can decide to take part of the full 4.2 mile loop that heads into the North Meadow before coming back around to the reservoir, or you can simply just continue along the reservoir.

By not heading into the North Meadow, the loop will be ~.75 miles shorter.

1) To get to the very beginning of the Bridle Path, you can enter the park right by the Columbus Circle entrance and get onto the main walking/running/biking path in the park. From there you can begin walking in the clockwise direction northbound.

Just a few minutes on the main path, you will see a dirt path on your right hand side with an arch just behind it – the Pinebank Arch, where the Bridle Path begins.

From this dirt path you will soon meet up with the start of the Bridle Path, where you can then continue northbound in the park. Below is a picture of the dirt path off the main path: 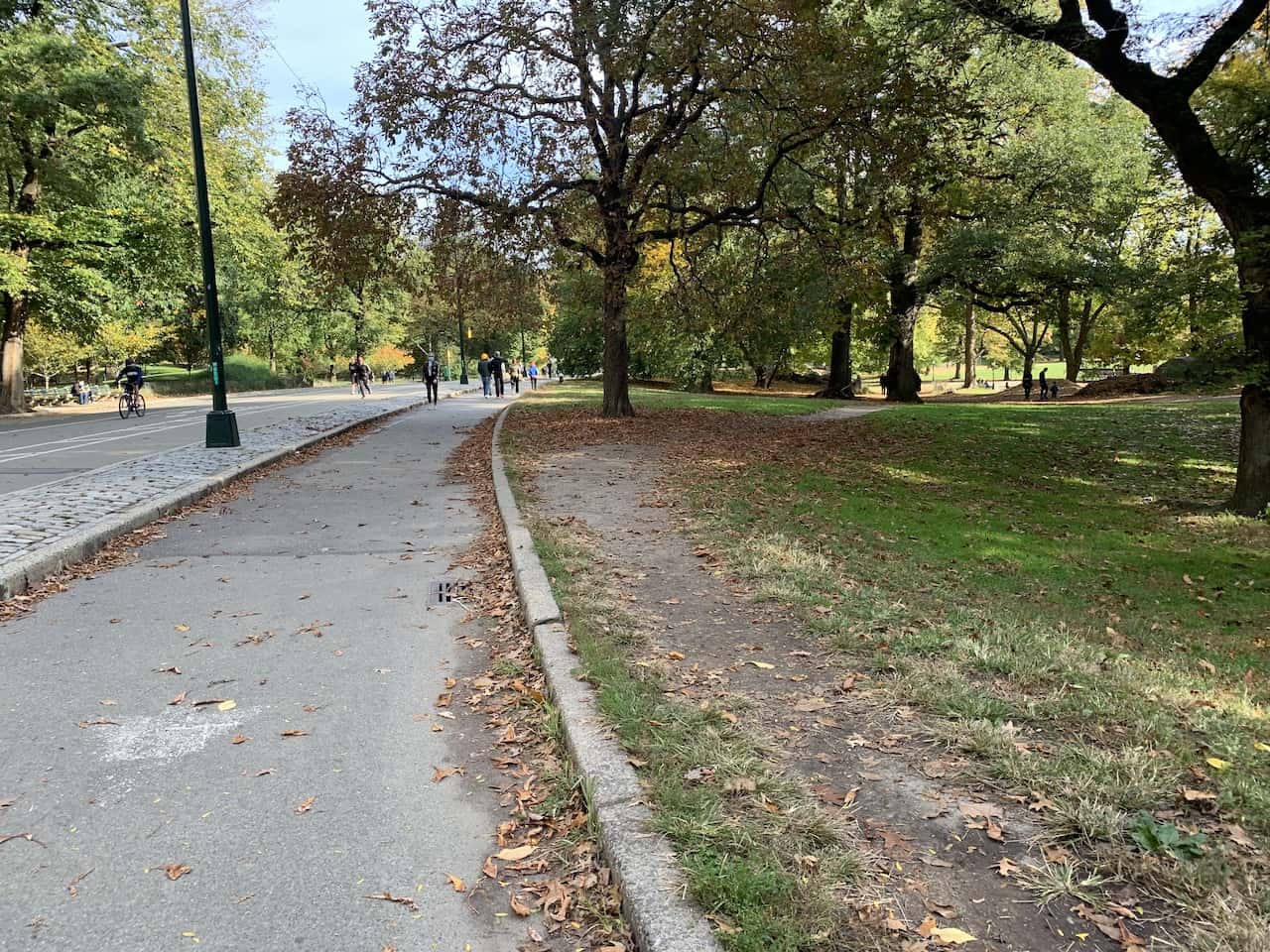 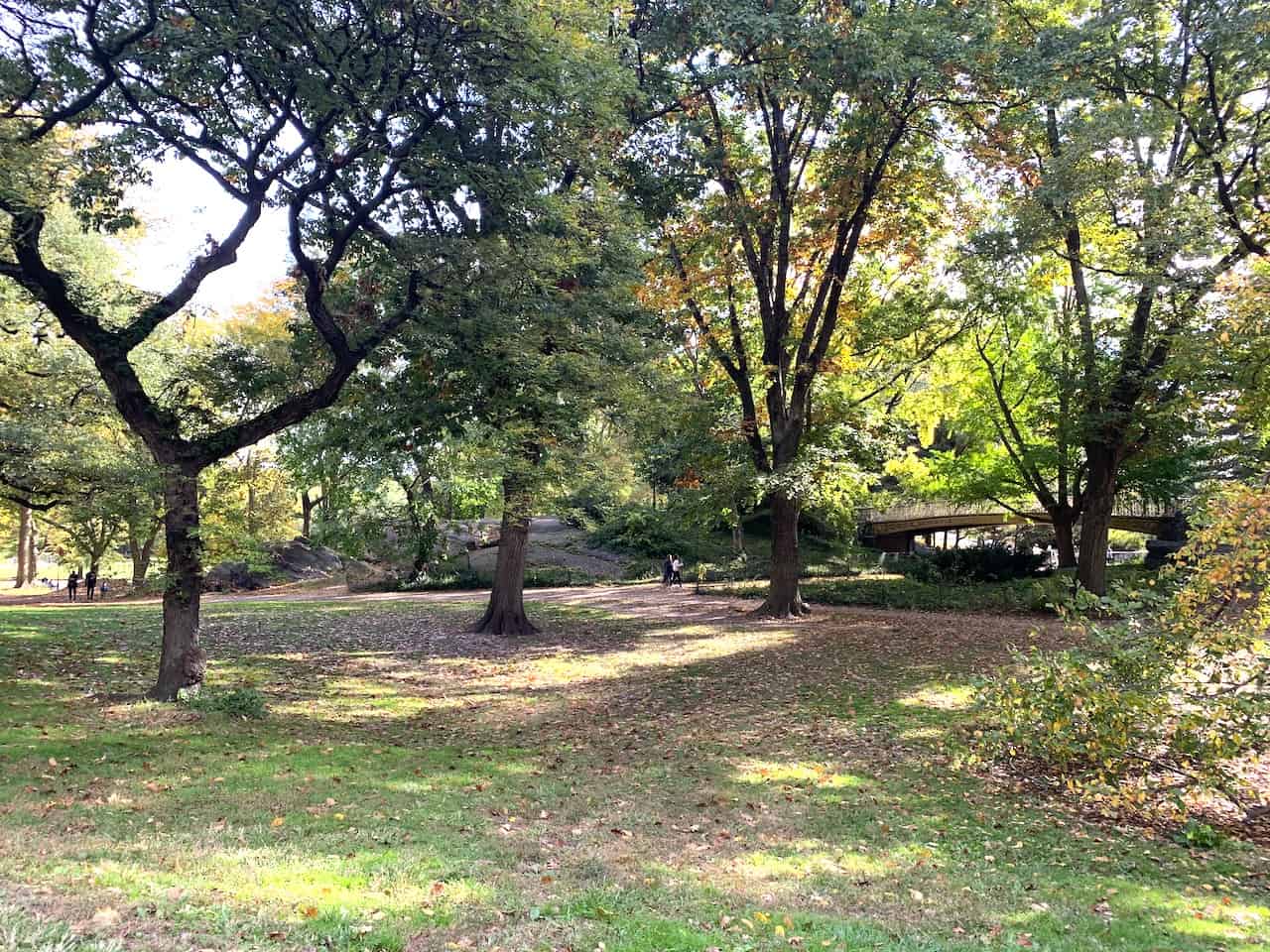 2) On the other hand, if you don’t mind missing out on the first 5-10 minutes of the Bridle Path, you can instead just continue on the main path, where you will soon pass by Tavern on the Green on your left hand side.

Right in between the main path and Tavern on the Green you will see the dirt Bridle Path. Just hop on from here and head on up to continue on with your walk or run. 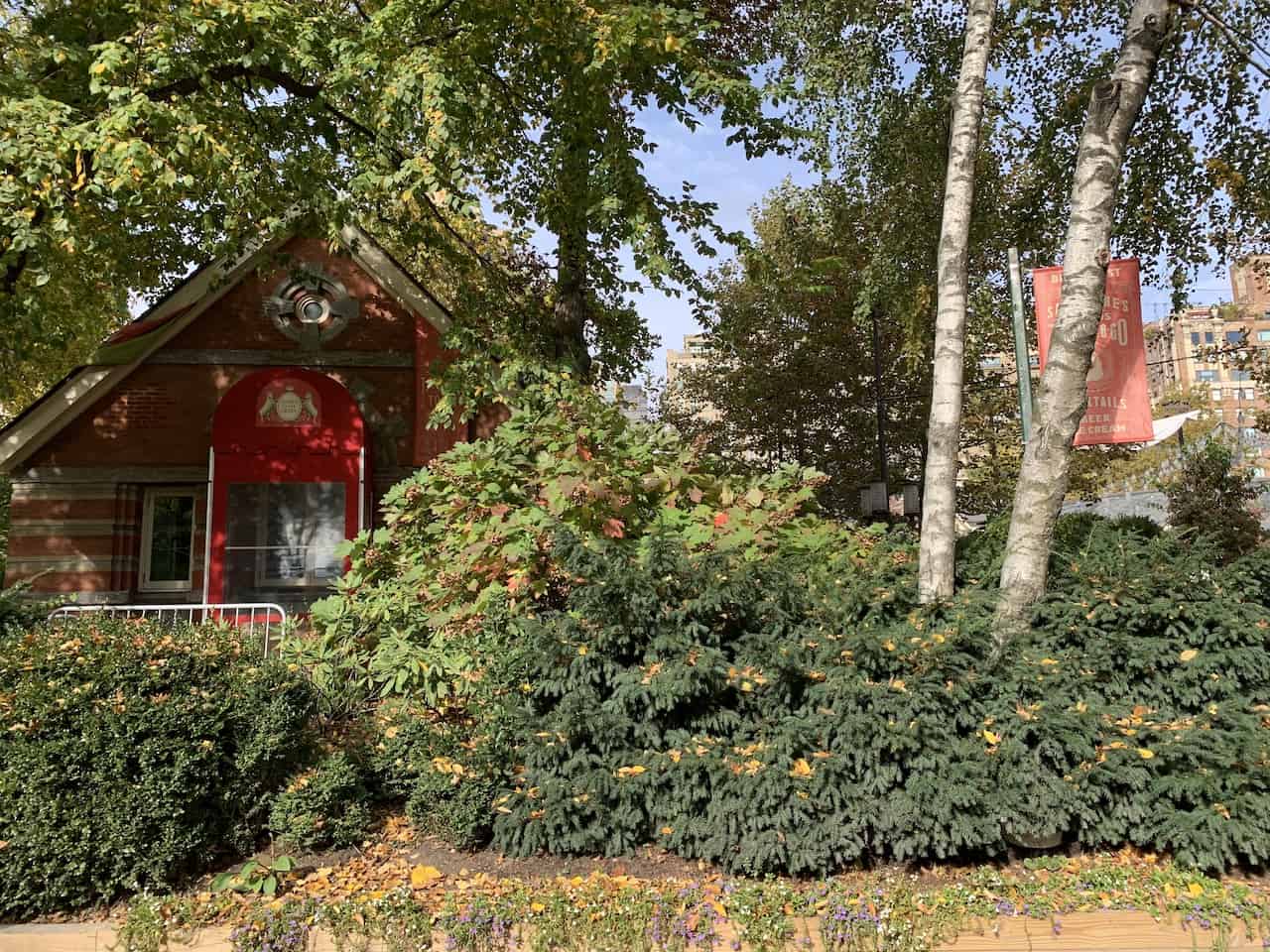 While you can enter the park from the east or south and head towards the starting point from there, the easiest entrance would be by Columbus Circle. There are several subways that stop at Columbus Circle including the A,B,C,D,1,2. You could also take the 4/5/6 to 59th Street and walk 20 minutes or the N/R/W to 59th and 5th stop and walk 10 minutes from there.

Once you make it to the starting point of the Bridle Path near the Pinebank Arch, it is time to begin your walk or run northbound. The path will head right along the Heckscher Fields area before crossing underneath West Drive into the Dalehead Arch.

Very soon after you head through the arch, the Bridle Path will be nearly parallel with West Drive. This is also where you will pass by Tavern on the Green on your left hand side (another potential starting point to get yourself onto the Bridle Path).

Directly after Tavern on the Green you will need to cross the intersection to catch the next section of the Bridle Path on the other side. 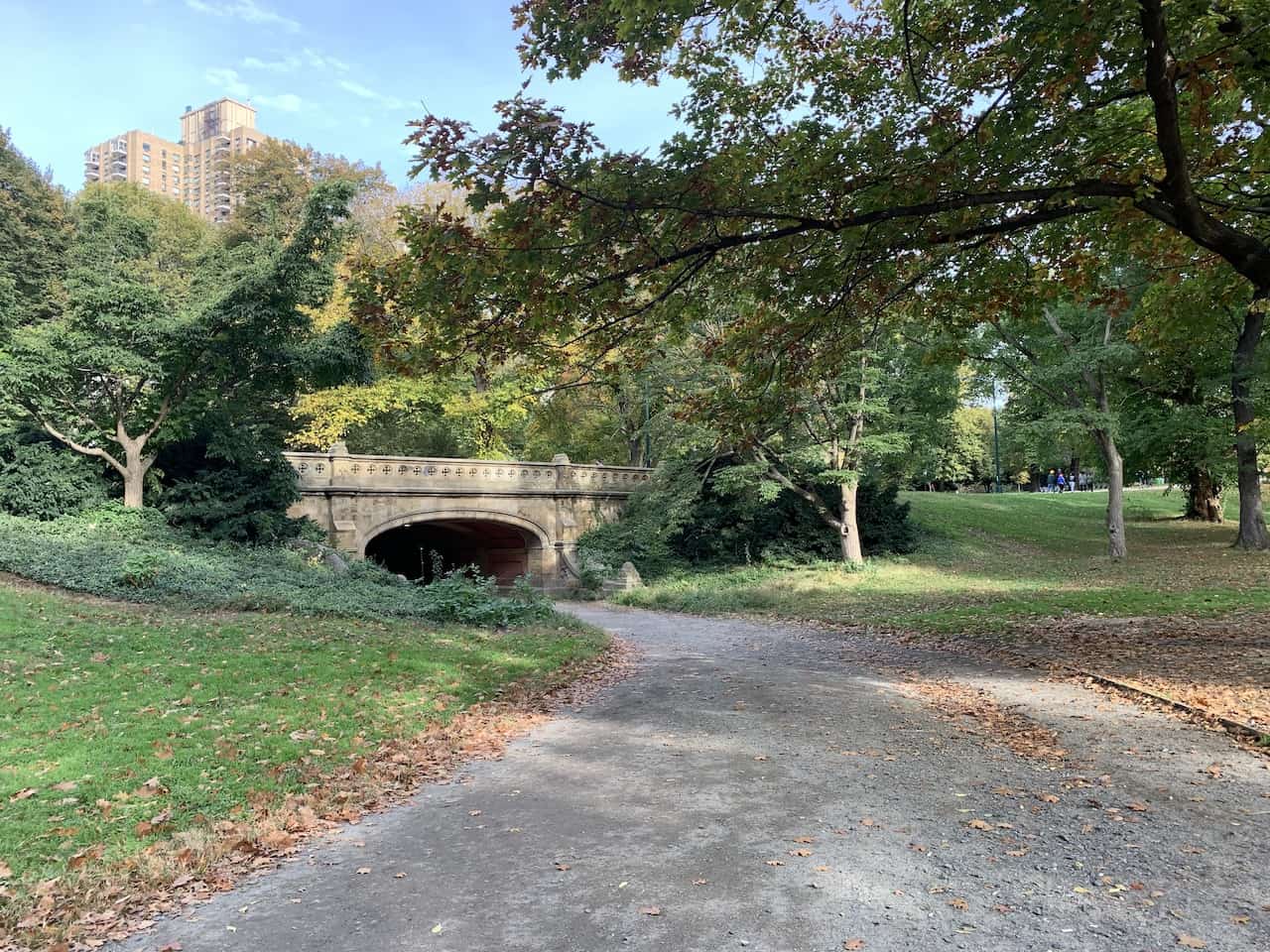 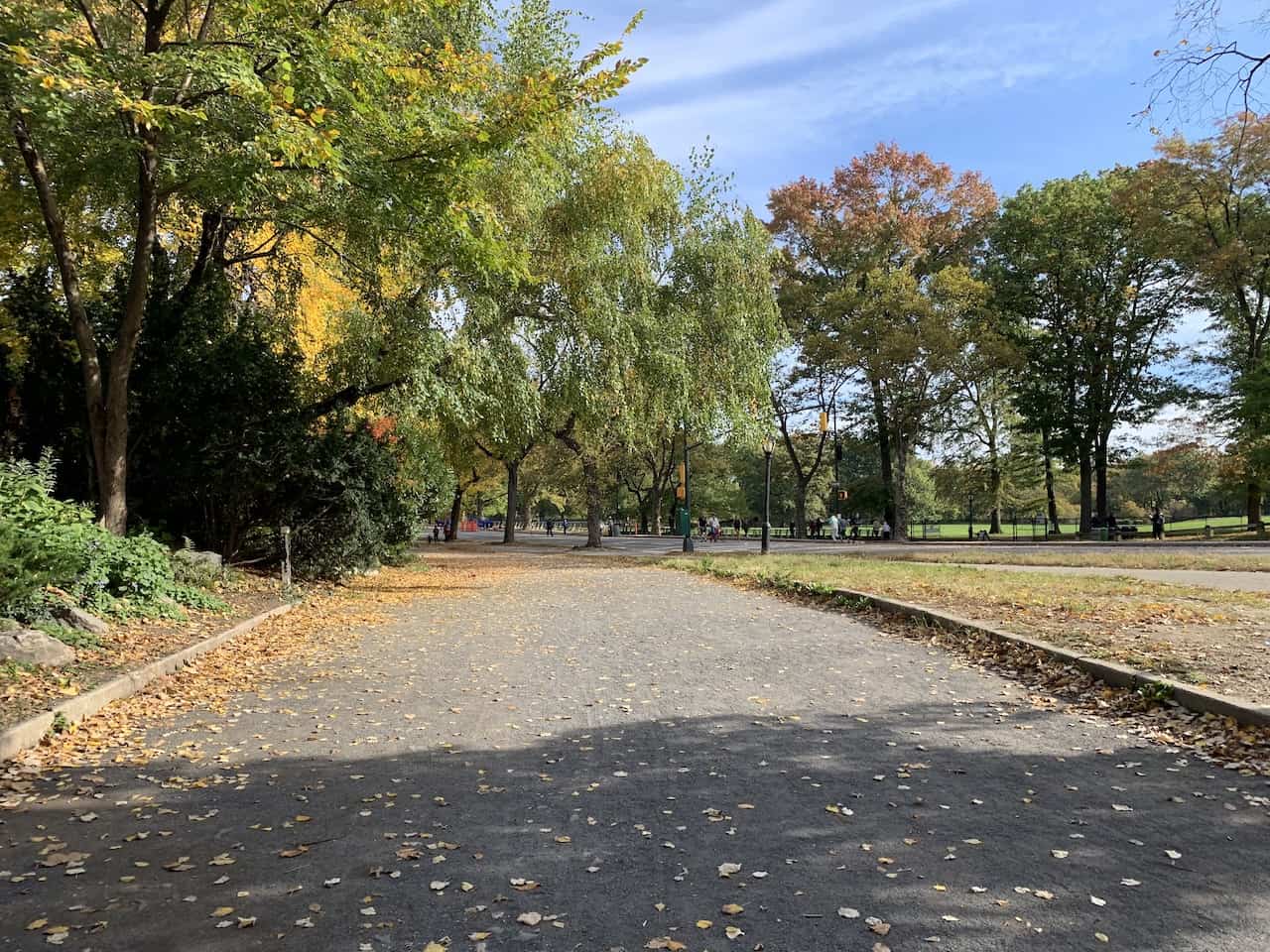 The path will then wind its way through Runner’s Grove as you head through a scenic area of the park and eventually through another couple of tunnels.

It is a great quiet section as you make your way up here surrounded by various foliage greenery in every which direction. 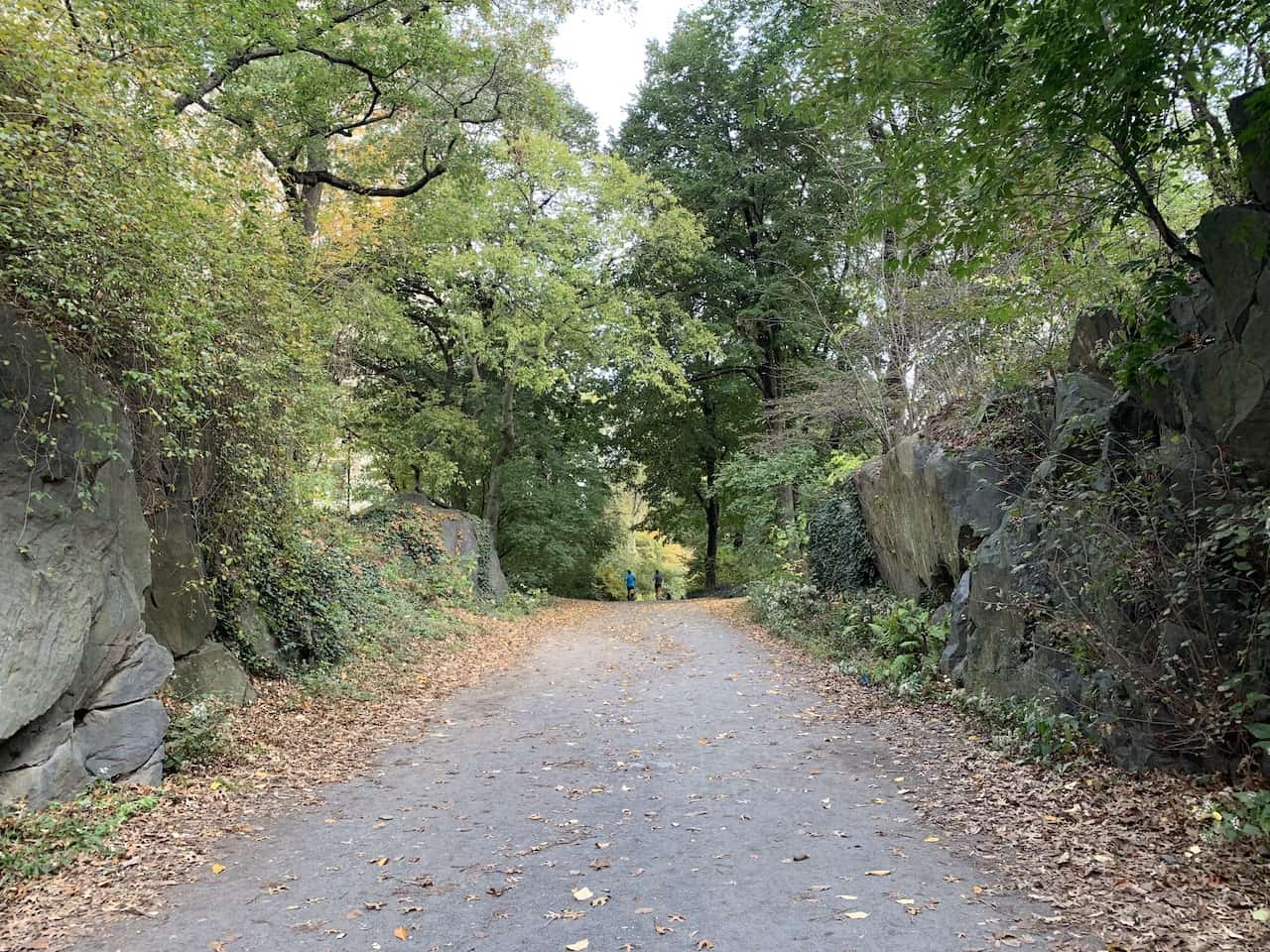 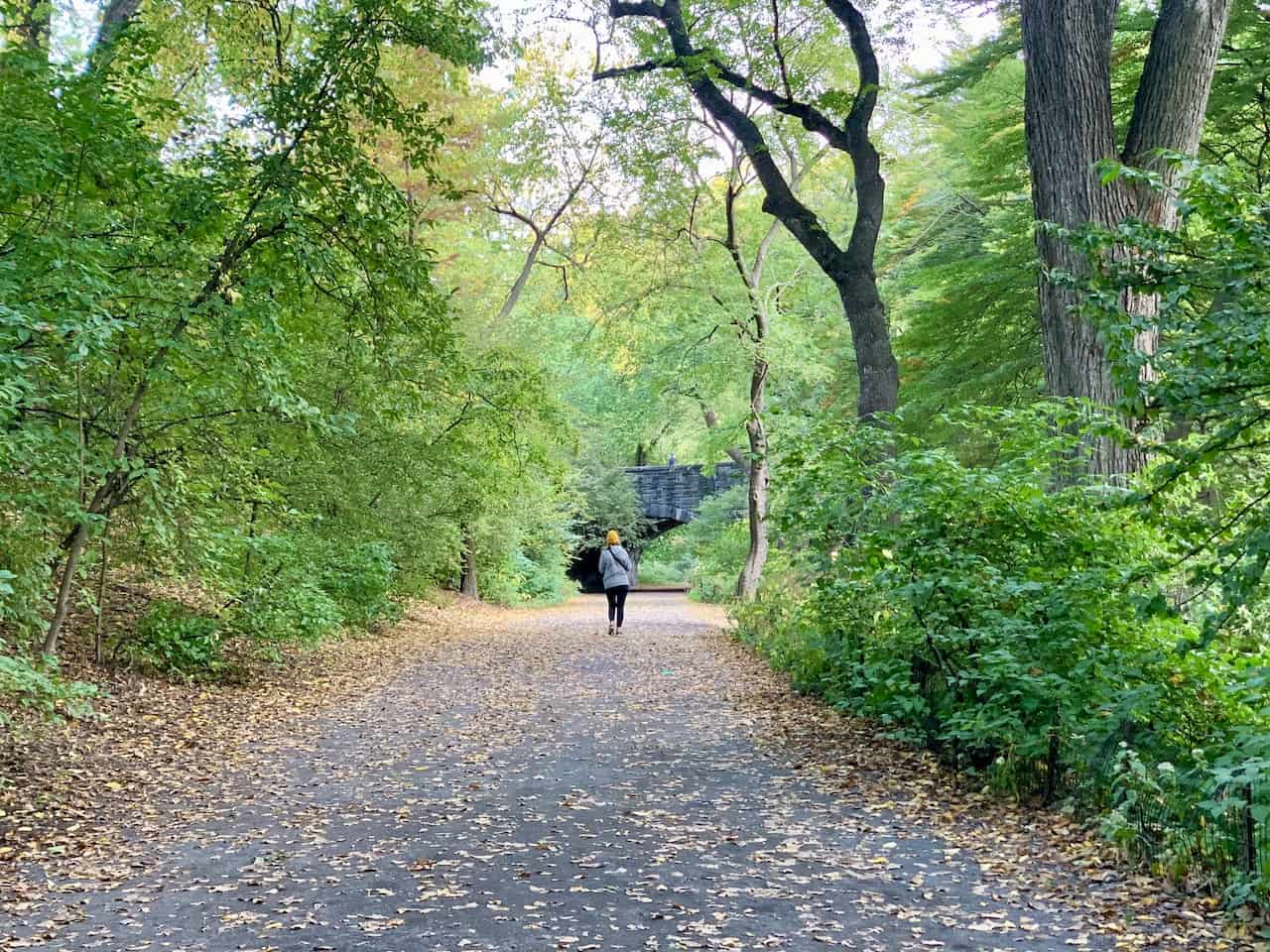 The path will eventually wind its way a bit east as you head under West Drive once again and through the Winterdale Arch. You will soon be walking right alongside the right hand side of West Drive towards the Reservoir. 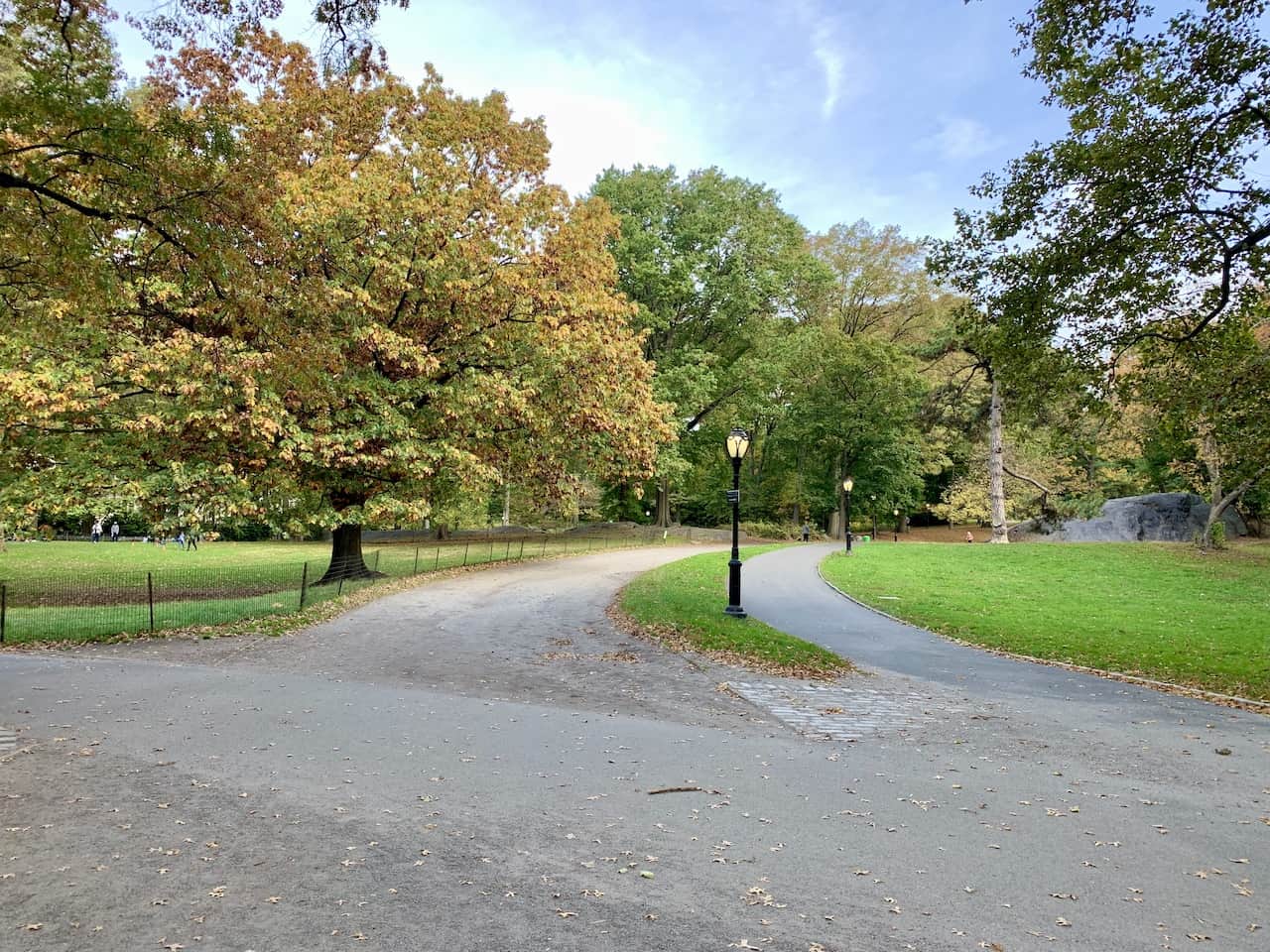 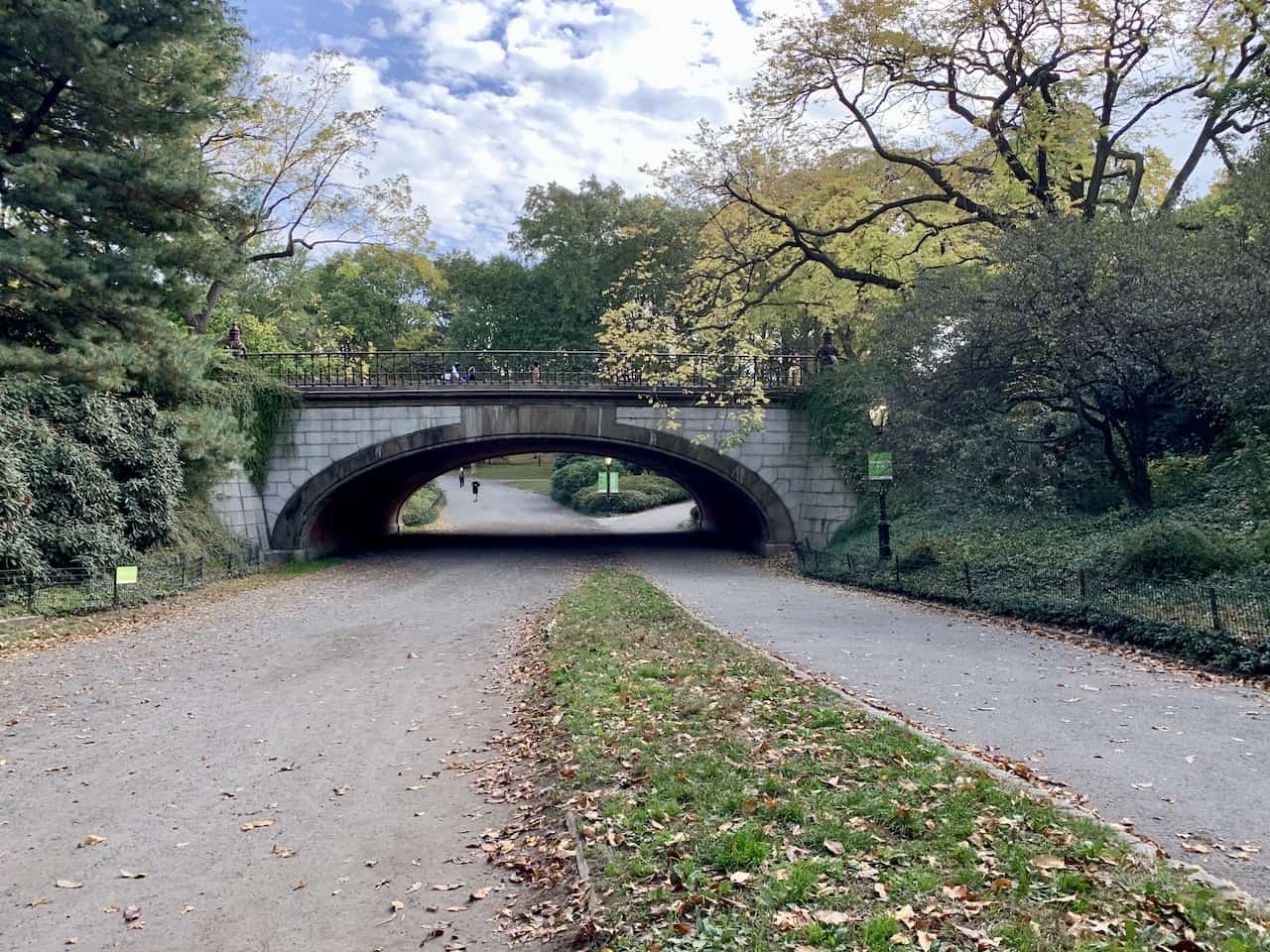 Once you reach the reservoir area, you will make a right hand turn at the intersection pictured below, and follow the Bridle Path in a counter clockwise direction around the reservoir.

If you really wanted to, you could also just walk right alongside the reservoir at certain points. The Bridle Path around the reservoir area will be the busiest section of the route as it is right in the center of the Central Park action. 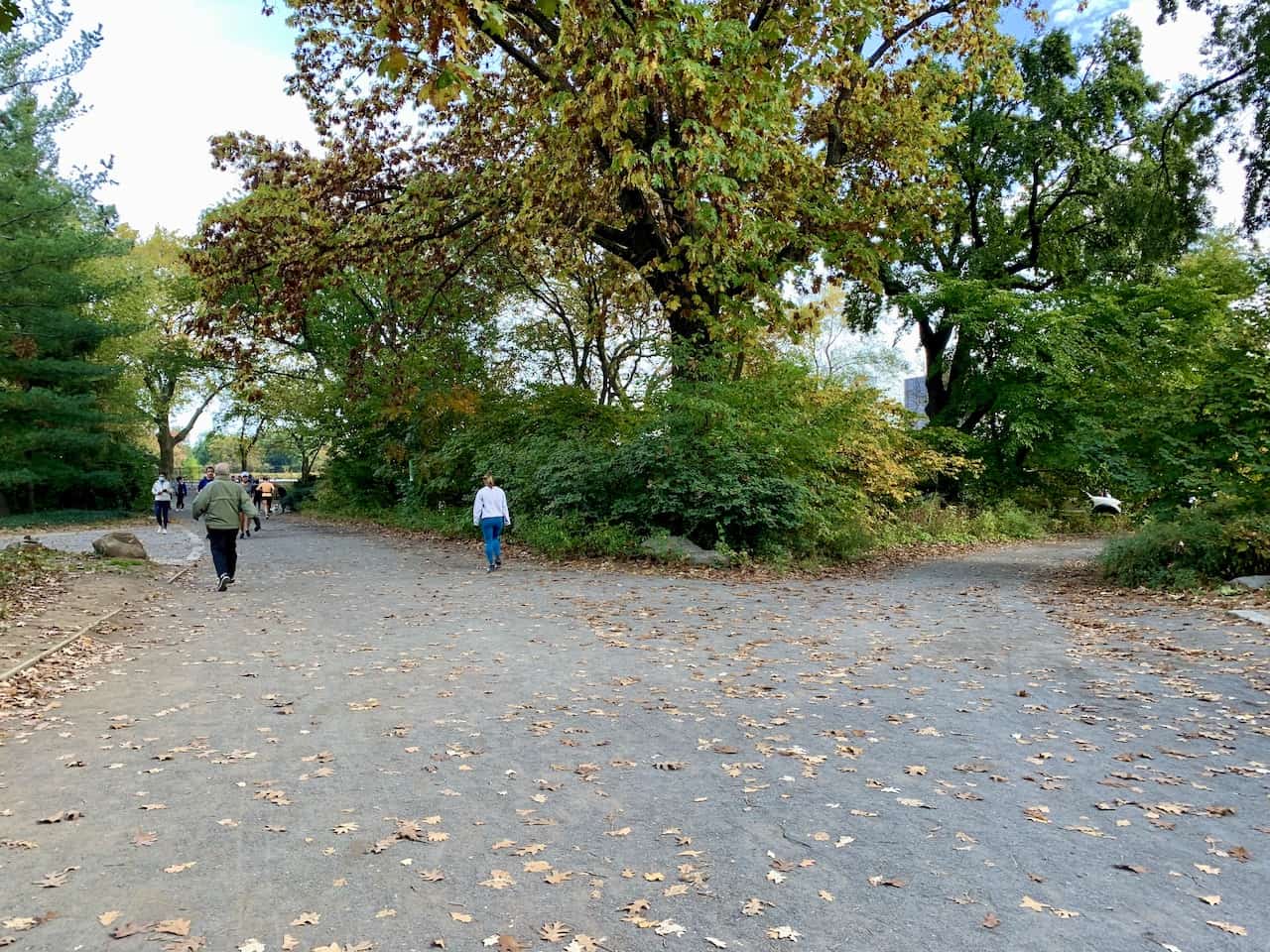 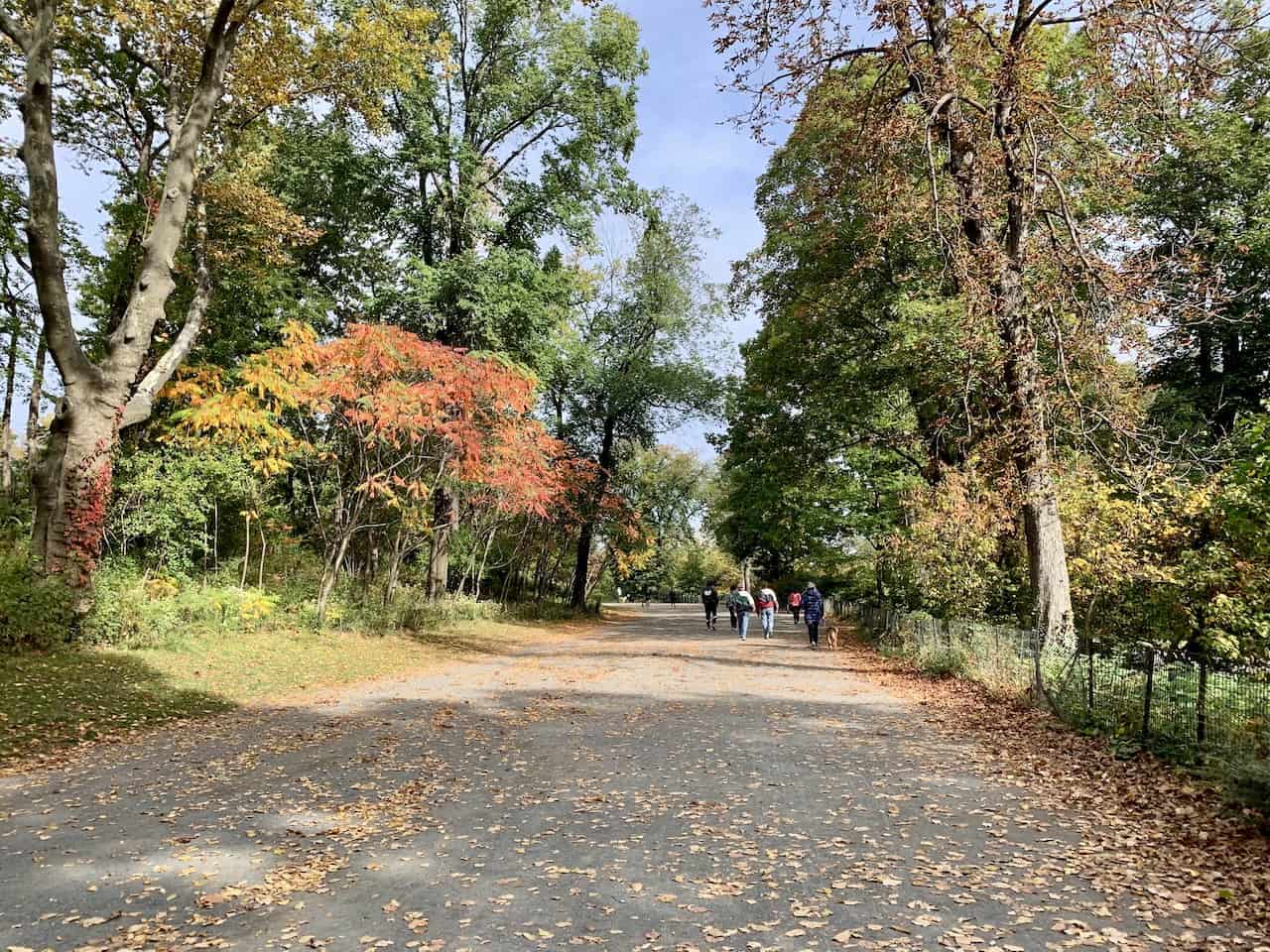 After reaching the north side of the reservoir, you can then decide from two options – either just continue the loop around the reservoir or you can opt for the longer loop that heads into the North Meadow before coming back to the reservoir.

The image below has the turnoff point to get onto the longer North Meadow loop on the right hand side, where the man in blue is heading. 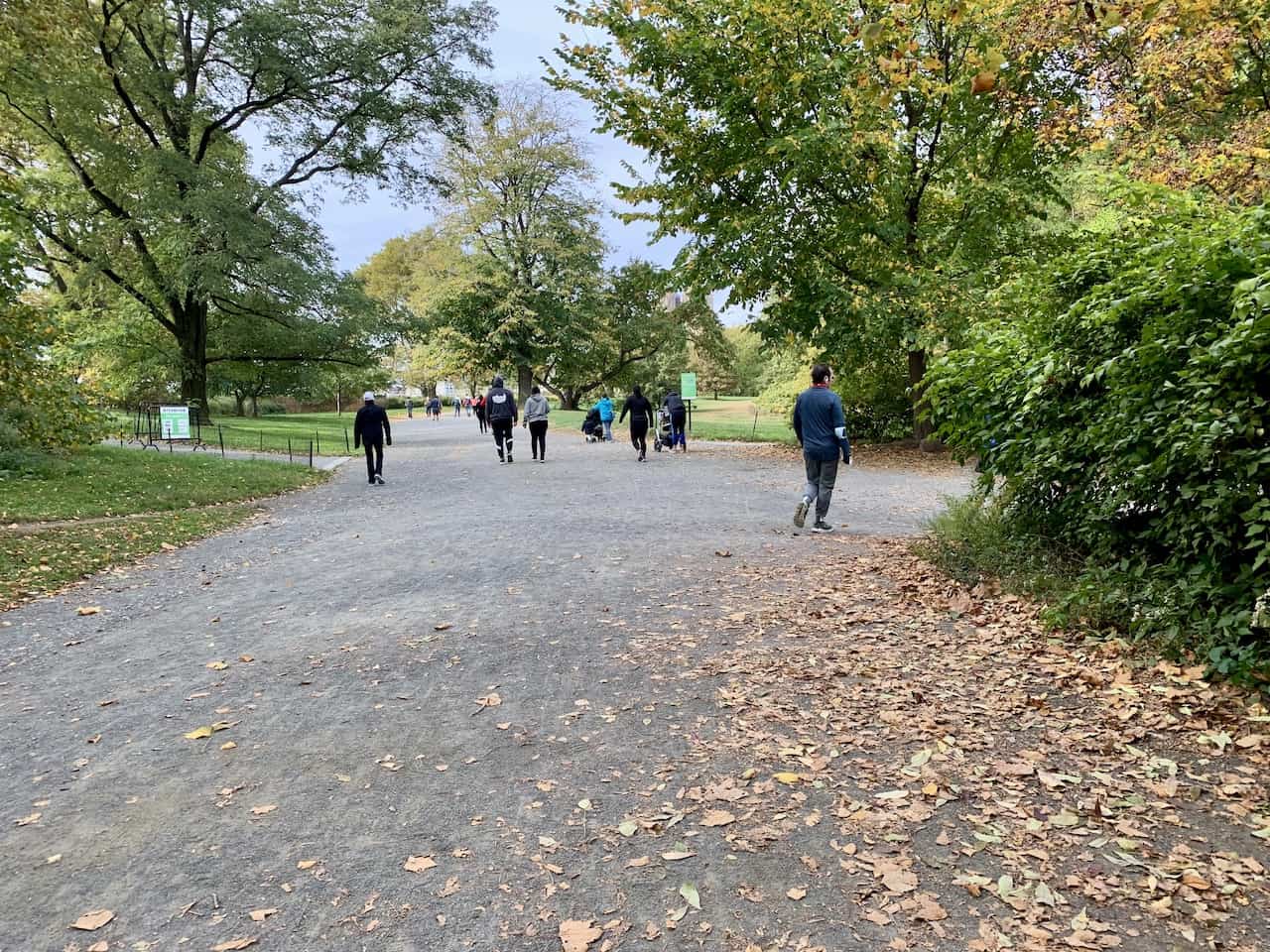 The Bridle Path will once again be parallel to the main East Drive path (to your right hand side now), and the North Meadow fields will be on your left.

Once you reach the northern part of the North Meadow, the path will head off to the left as you make your way across the 102nd Street crossing. 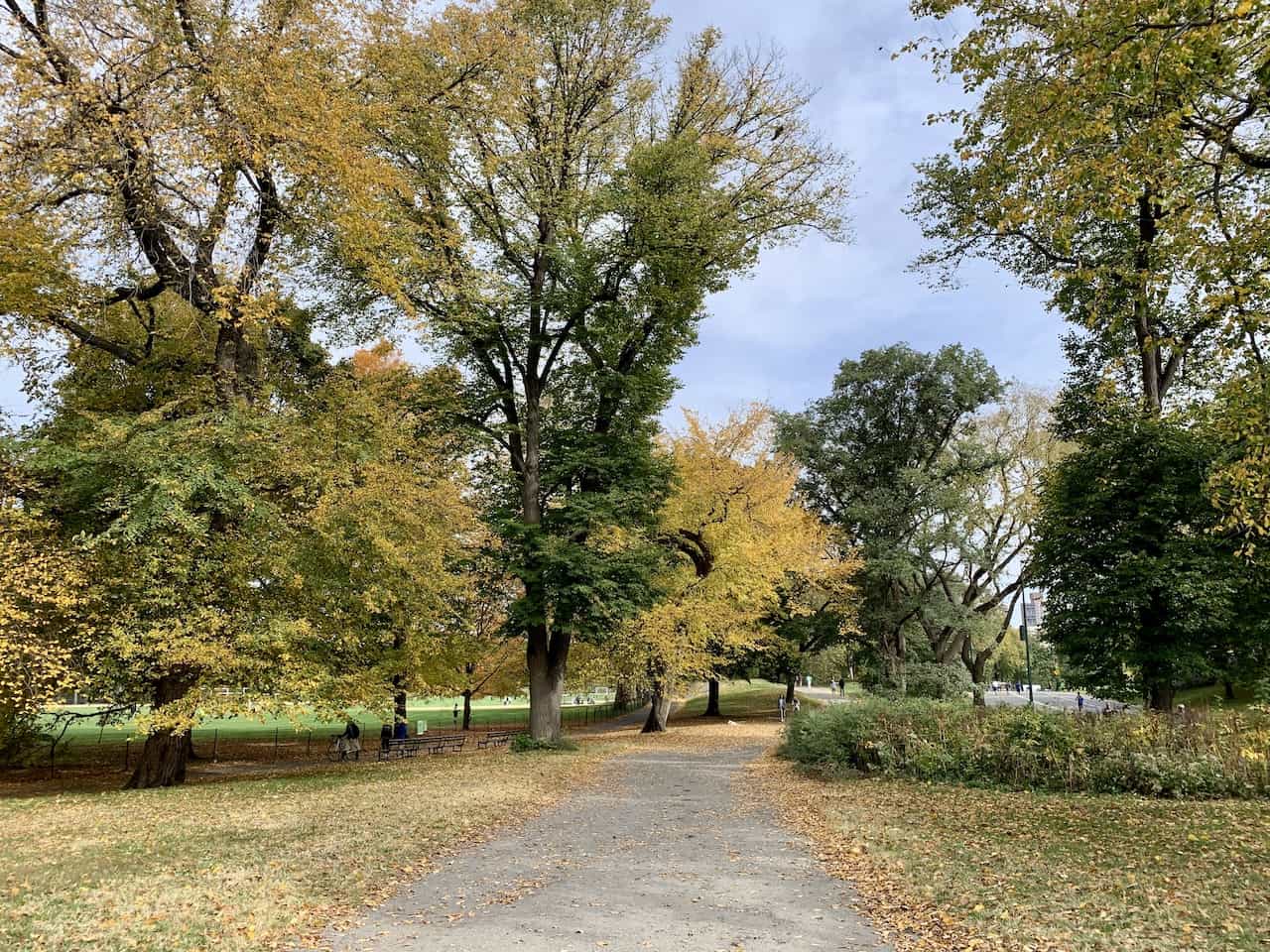 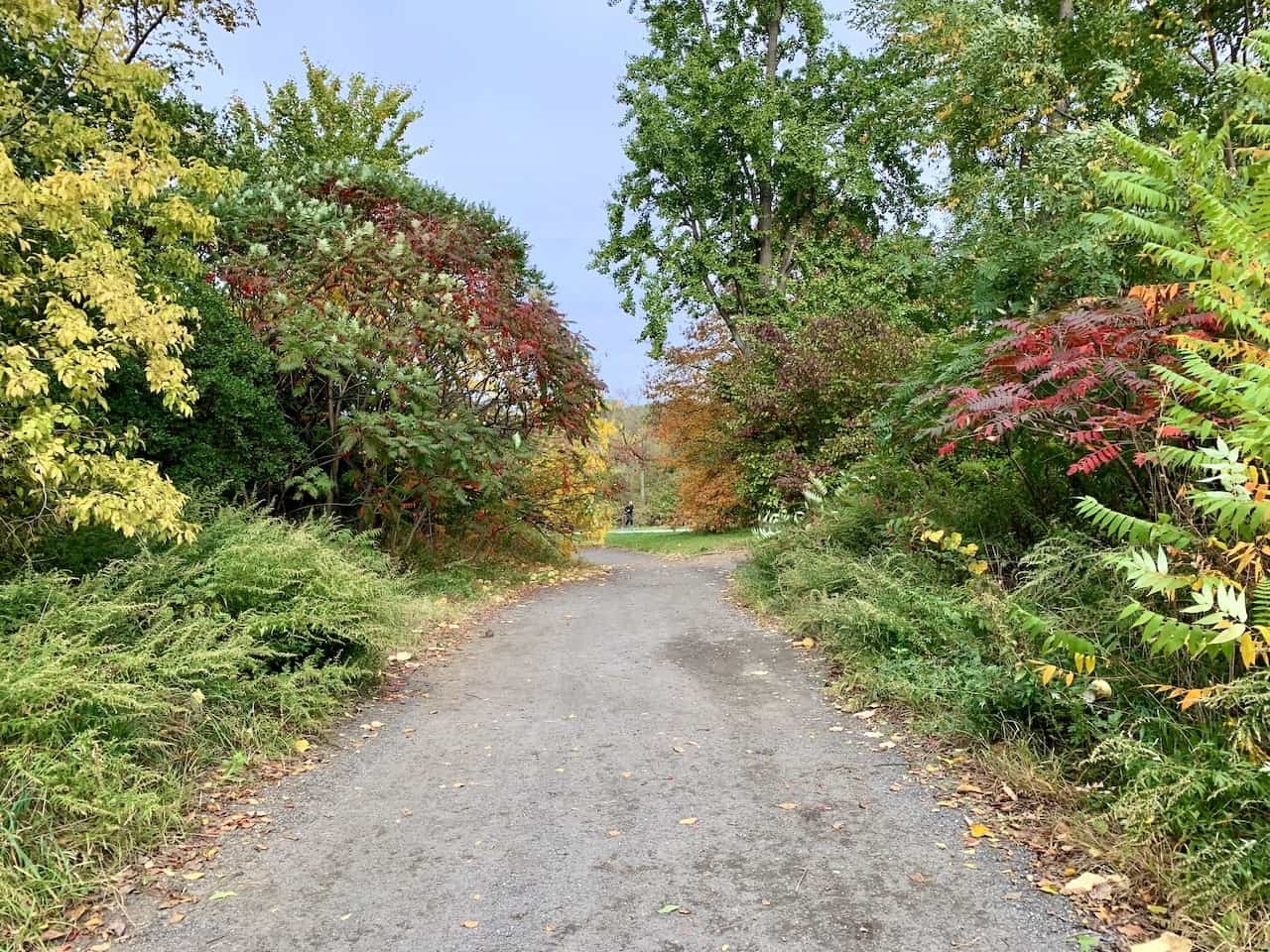 The path will actually turn a bit uneven for a few minutes as you walk alongside the 102nd Street crossing, but it will eventually turn nice and flat soon after. The Bridle Path will loop around to the west side of the North Meadow as you now head southbound back towards the reservoir.

Soon enough, the reservoir will come back into view and you can decide to walk right alongside it before arriving right back at the reservoir intersection from earlier on in the day.

It is then up to you to decide what to do! There is plenty in the park to walk through as you enjoy some other views of Central Park such as a visit to the Bow Bridge. 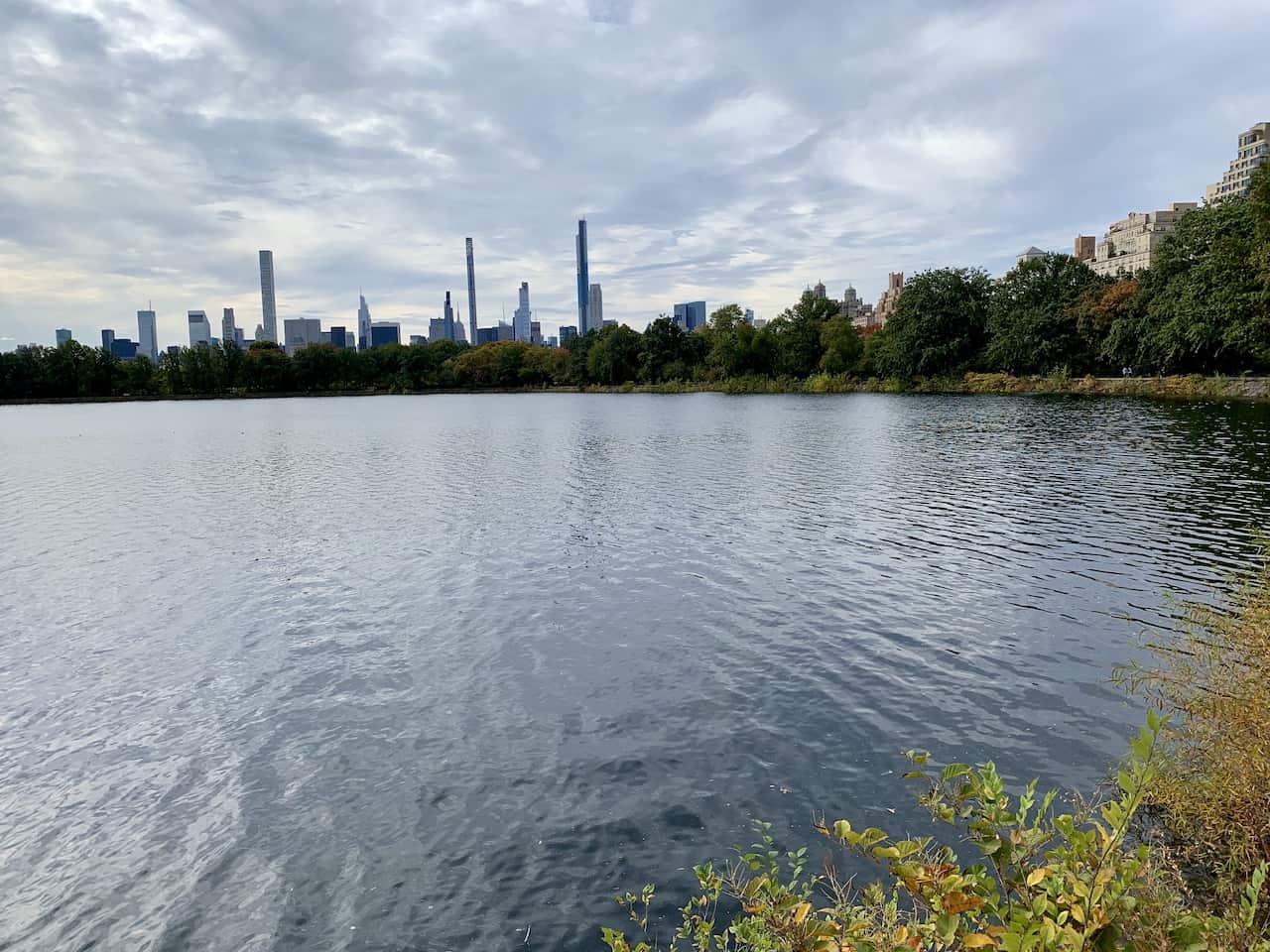 5) Where to Stay in Manhattan

You are also within walking distance to the southern end of Central Park. Almost all subway lines connect at Times Square so getting around should not be an issue. Recommended Midtown hotels:

Well, that about wraps up a guide to walking the Central Park Bridle Path. Be sure to also check out the guides to The Ramble and North Woods of Central Park for more options! If you do have any questions or comments, feel free to add them in below.

If you are looking for some outside of NYC hiking opportunities be sure to check out Bear Mountain, Breakneck Ridge, and Storm King! 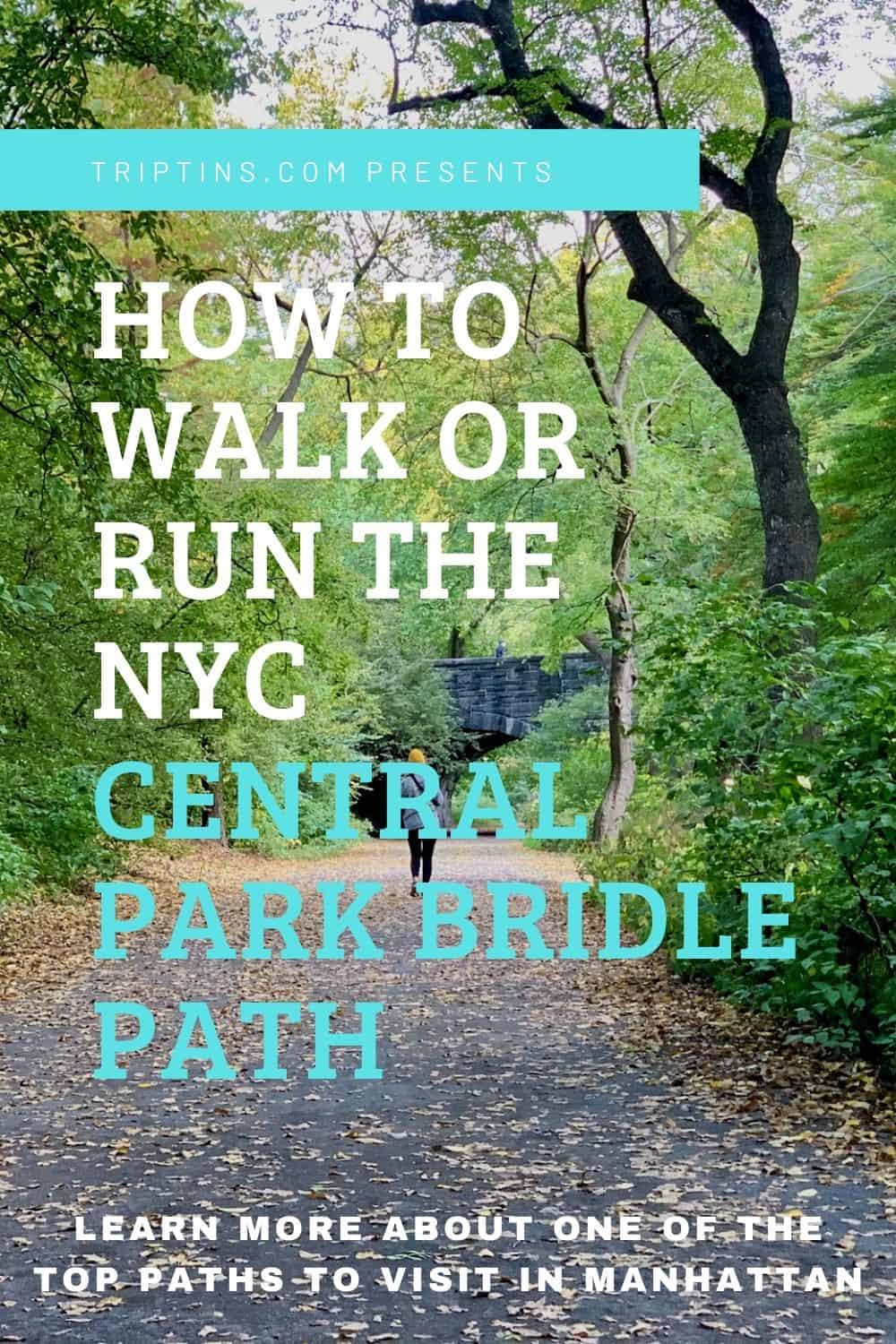 Thanks for the info, and the scenery is breathtaking. I wish to pass on this information to others about the many attractions in the park.