One of my favorite places in Manhattan has to be the Central Park Reservoir Loop. Better known as the Stephanie and Fred Shuman Running Track, this dirt path heads around the famous Jacqueline Kennedy Onassis Reservoir for 1.58 miles. As you make your way along the path, you will get various views of the NYC skyline surrounded by plenty of foliage in every which direction. This guide will talk more about the Central Park Reservoir and how to enjoy it for yourself.

1) What is the Central Park Reservoir Loop

Right in the middle of Central Park sits the Jacqueline Kennedy Onassis Reservoir. The Reservoir was built back in the 1860’s and at the time was the world’s largest man-made lake.

While the Reservoir is 40-feet-deep and can hold up to a billion gallons of water, it is no longer used as a water source in Manhattan.

Surrounding the Reservoir, you will find a dirt running and walking path named after Stephanie and Fred Shuman. The loop track goes for 1.58 miles as it curves its way around the Reservoir giving visitors a chance to take in views of the foliage and skylines from all different angles.

There are a few important things to note about the Central Park Reservoir Loop: 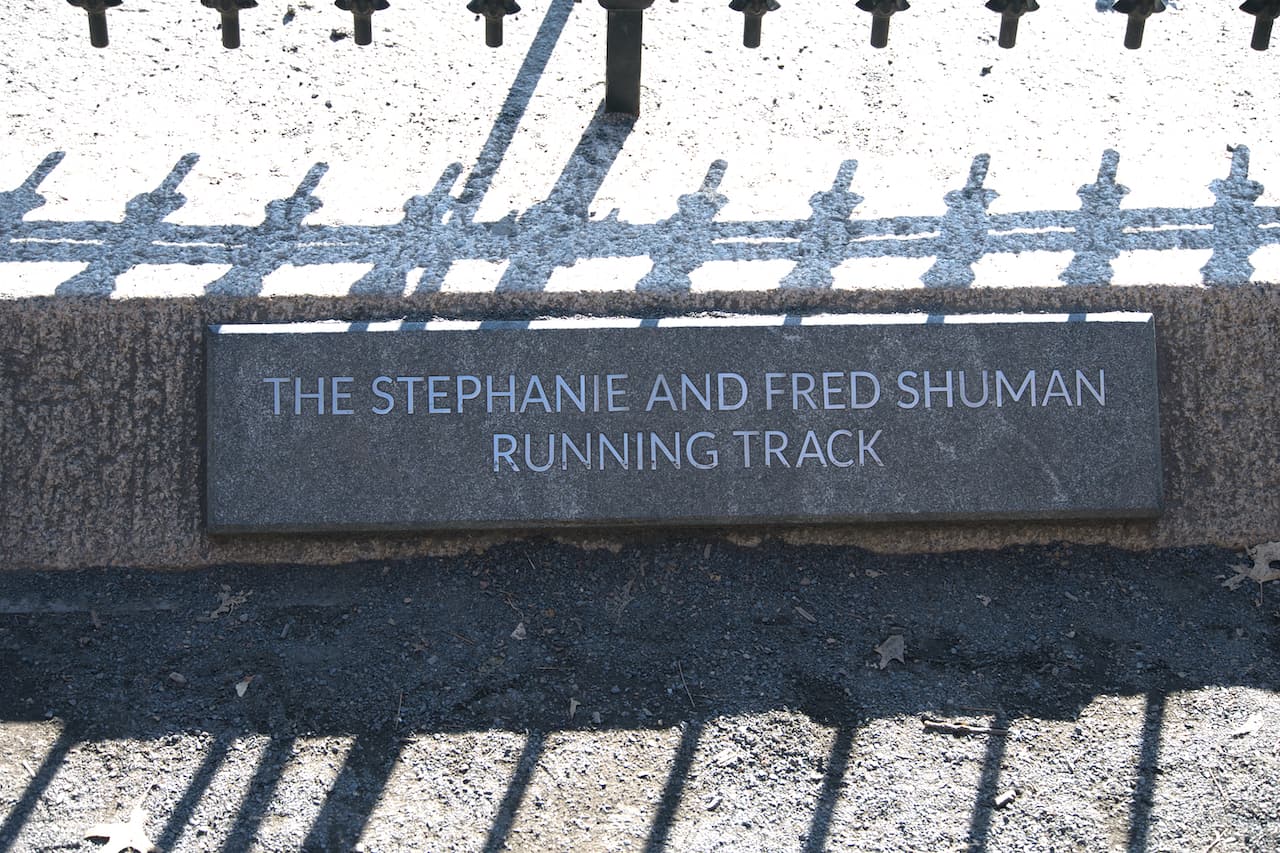 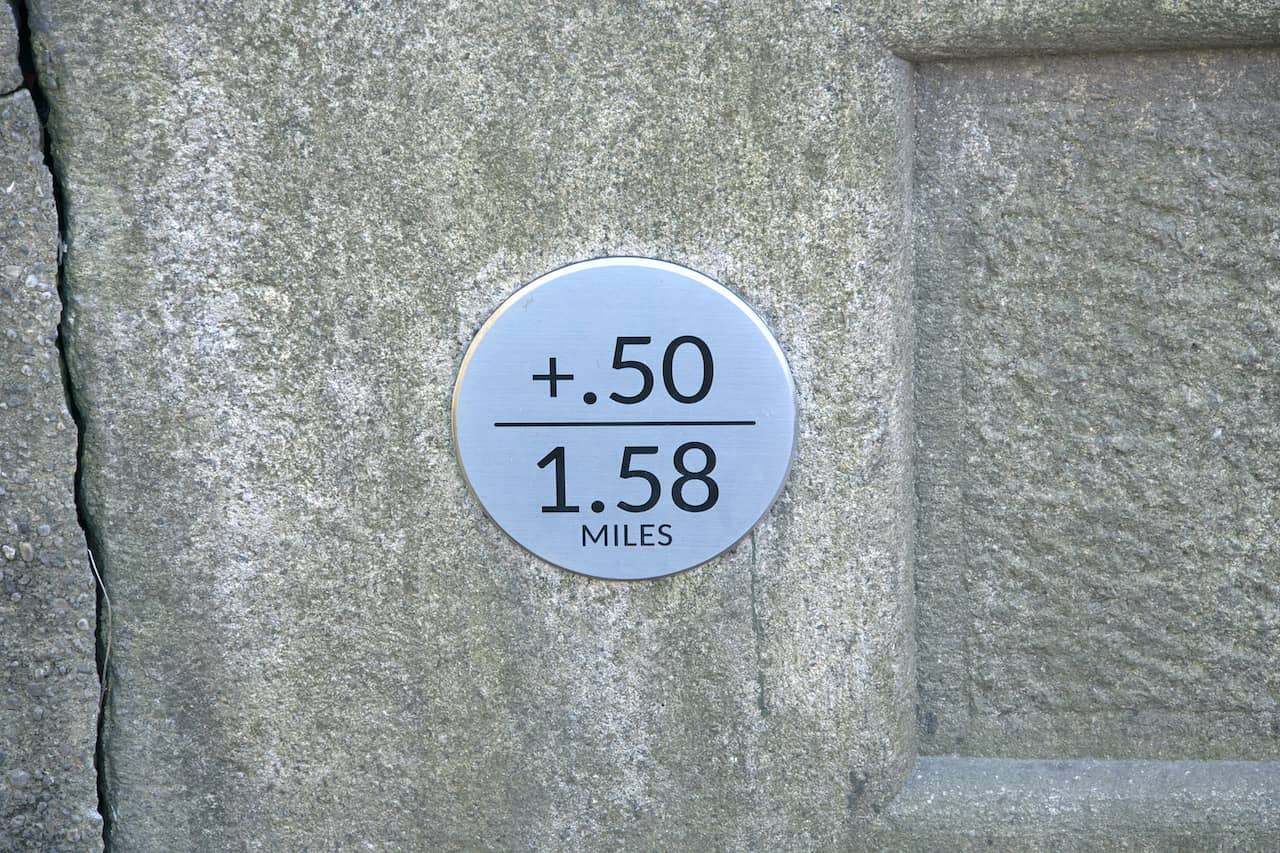 The nice thing about the Central Park Reservoir is that you can enter the loop from a whole variety of entry points on all sides of the park. Below are some of the main entrances to choose from though when deciding where to start from:

Engineer’s Gate – at the intersection of 90 Street and 5 Avenue on the East side of the park you will find one of the more popular entrances to the Reservoir named Engineer’s Gate. At this entrance is where you will find the “start” of the loop path as the trail marker here (similar to the above image) is marked 0.00 / 1.58 miles.

South Gate House – at the southeast part of the Reservoir you will find one of the original water distribution systems, the South Gate House. As you are heading along the main East Drive within Central Park, you will see a staircase on your left hand side around 86 Street, which will bring you right up to the Gate House and onto the loop track.

West Drive / 86 Street – at the opposite side of the South Gate House on the southwest side of the Reservoir is another main entrance point to the track. If you are heading along West Drive, you can begin your loop around the Reservoir as you approach this southwest corner of the path.

Below are three screenshots from Google Maps to give you an idea what each one of these starting points looks like: 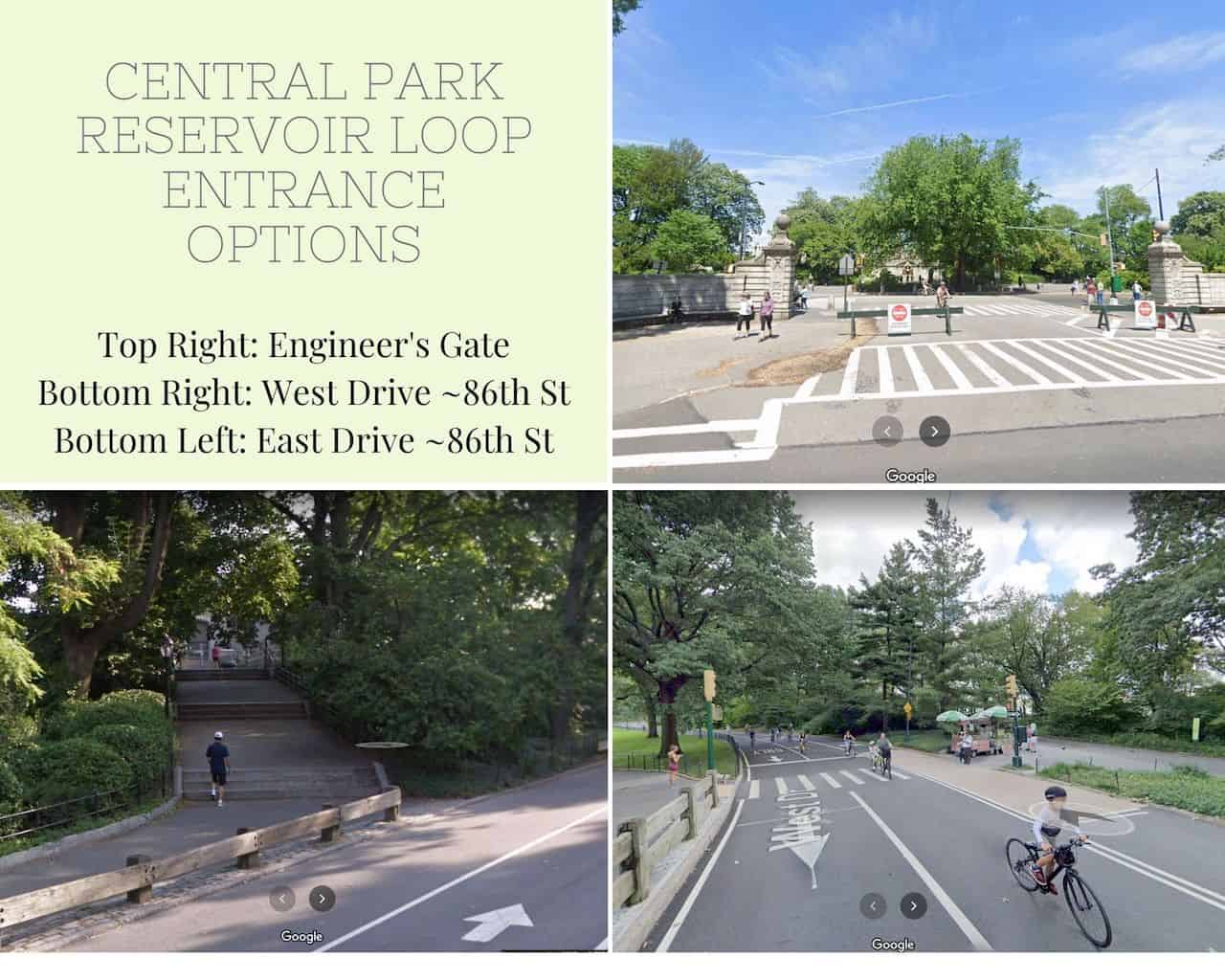 » Now, while these are some of the main Central Park Reservoir entrances, you really can enter the track from plenty more spots.

With that said though you do not have the ability to enter/exit the running track at any point, but there are several instances where the Bridle Path & East/West Drives are directly accessible.

↔ Bridle Path – The Bridle Path is a 4.2 mile dirt running/walking path that starts near the southwest corner of the park and then loops around the Reservoir (not the same path of the running track). Learn more in the Bridle Path Central Park guide up on the site.

You can really make your way to the Reservoir from all parts of Central Park so it does not necessarily matter where you enter from / it will also depend what else you might be doing in the park beforehand. Below are a few subway lines to consider nearby though:

N/R/W – you can head to either 57 Street and 7 Avenue or 59 Street and 5 Avenue stops on the southern part of the park and walk up from there.

Q – the Q train also stops at 57 Street and 7 Avenue as well as 63 Street and Lexington, where you can begin your walk from.

3) Where to Stay in Manhattan

Now that you have a bit more background about the Central Park Reservoir and how to get there, let’s dive into the pathway itself. Usually during my trips to the Reservoir, I begin right near the South Gate House since I am entering the park from downtown.

Below I will talk about the loop starting from that point, but remember you can really enter from a whole variety of places in Central Park.

After getting off the East Drive route and heading up the short staircase, you will be welcomed to the South Gate House right in front of you. On the Gate House you will find plenty of information boards with the the history of the Reservoir if you would like to learn a bit more about it. 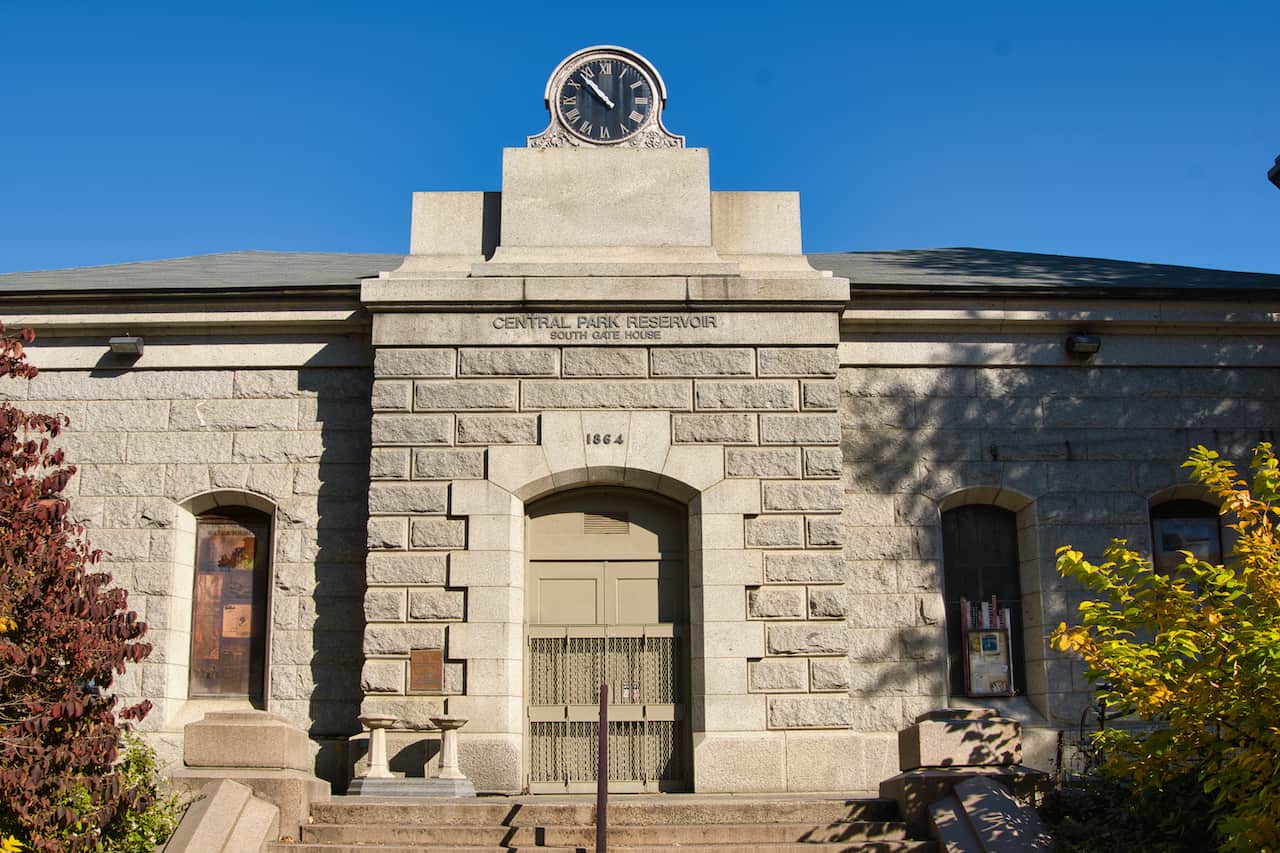 From here you will need to start going to the right hand side (counter clockwise) as you hop on the Reservoir loop and begin the 1.58 mile trail around. The first part of the loop takes you uptown as you make your way from around 85 Street to 96 Street.

This will be a straight shot right alongside the Reservoir as you follow the tree lined dirt path and get some beautiful views of the west side of the city as well as the colorful foliage in every which direction.

The famous twin towered luxury building that will be prominent on that western skyline is the Eldorado at 300 Central Park West. A whole array of celebrities have lived there throughout the years including Bruce Willis, Carrie Fisher, Michael J Fox, Bono, among several others. 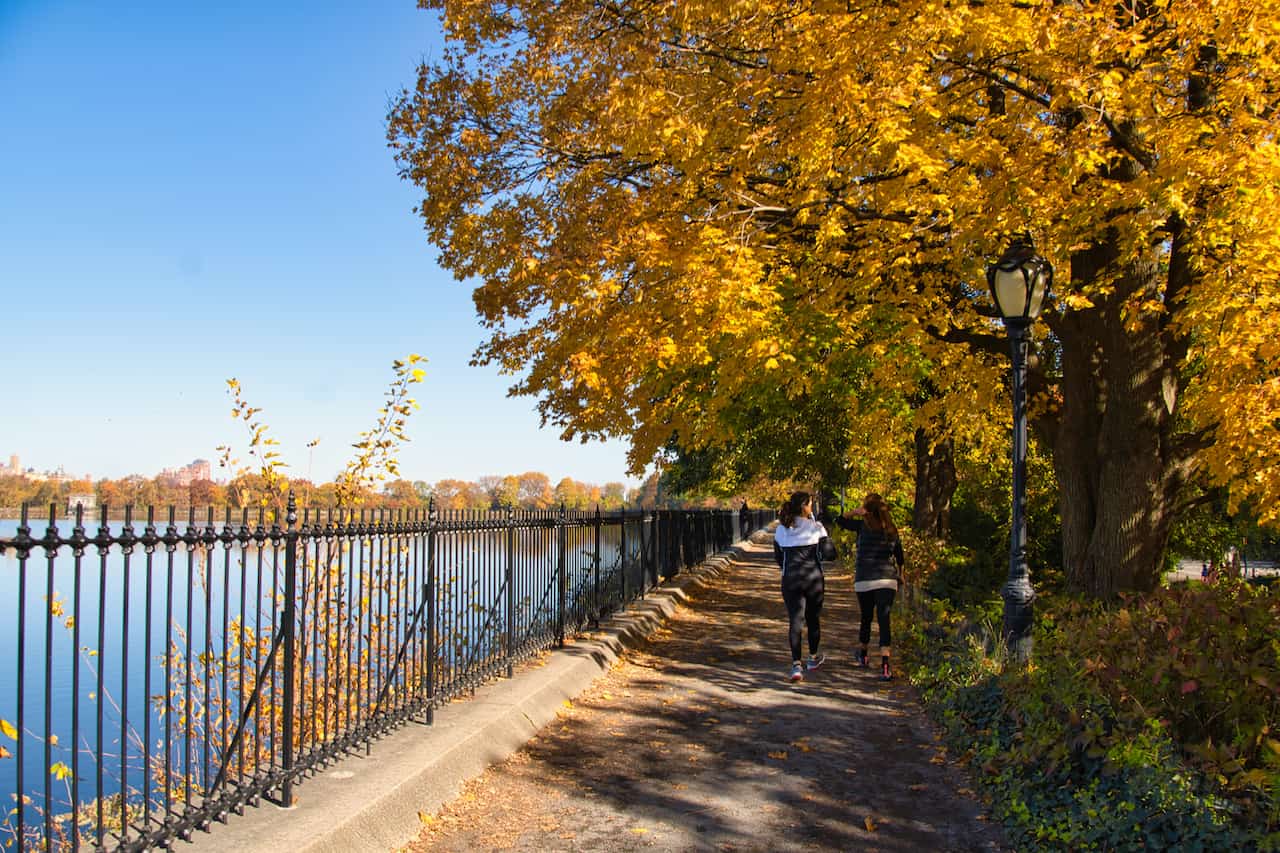 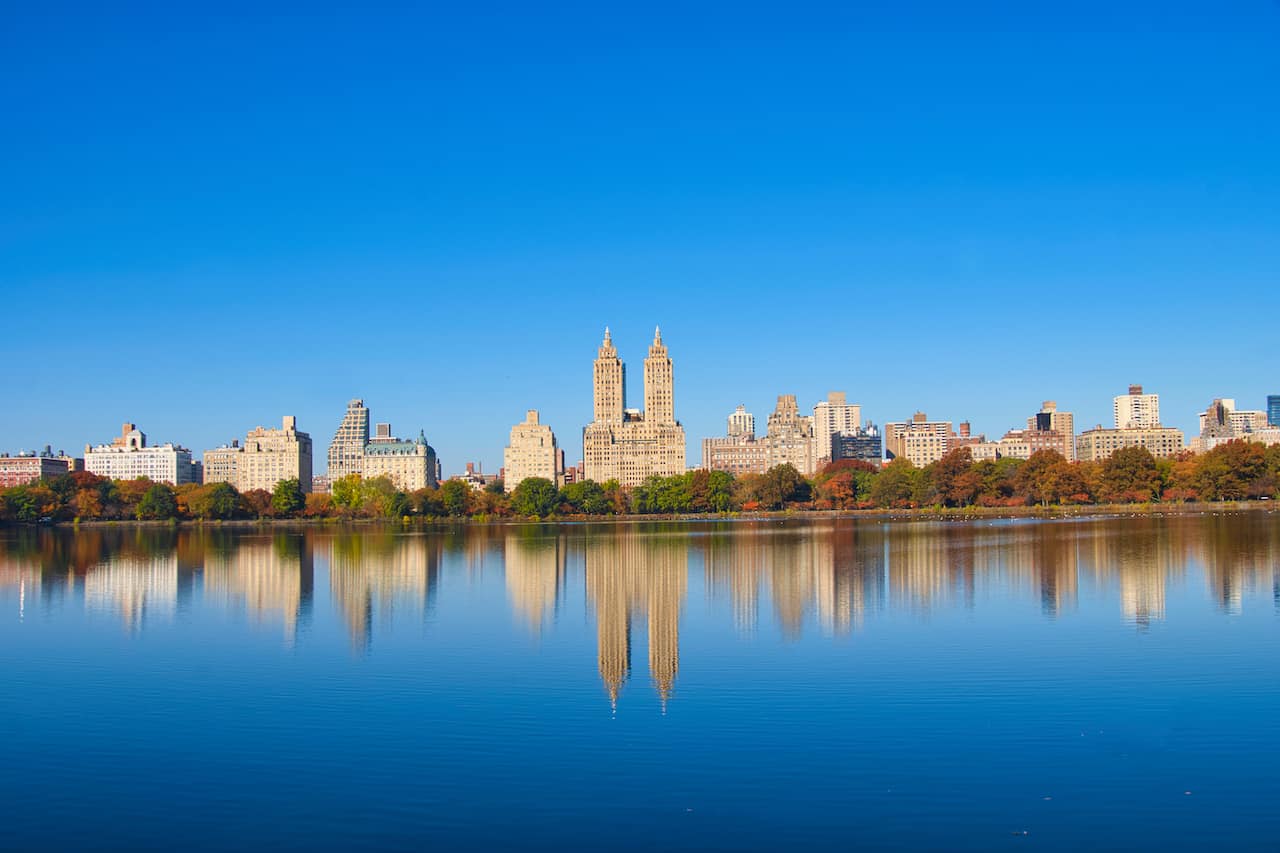 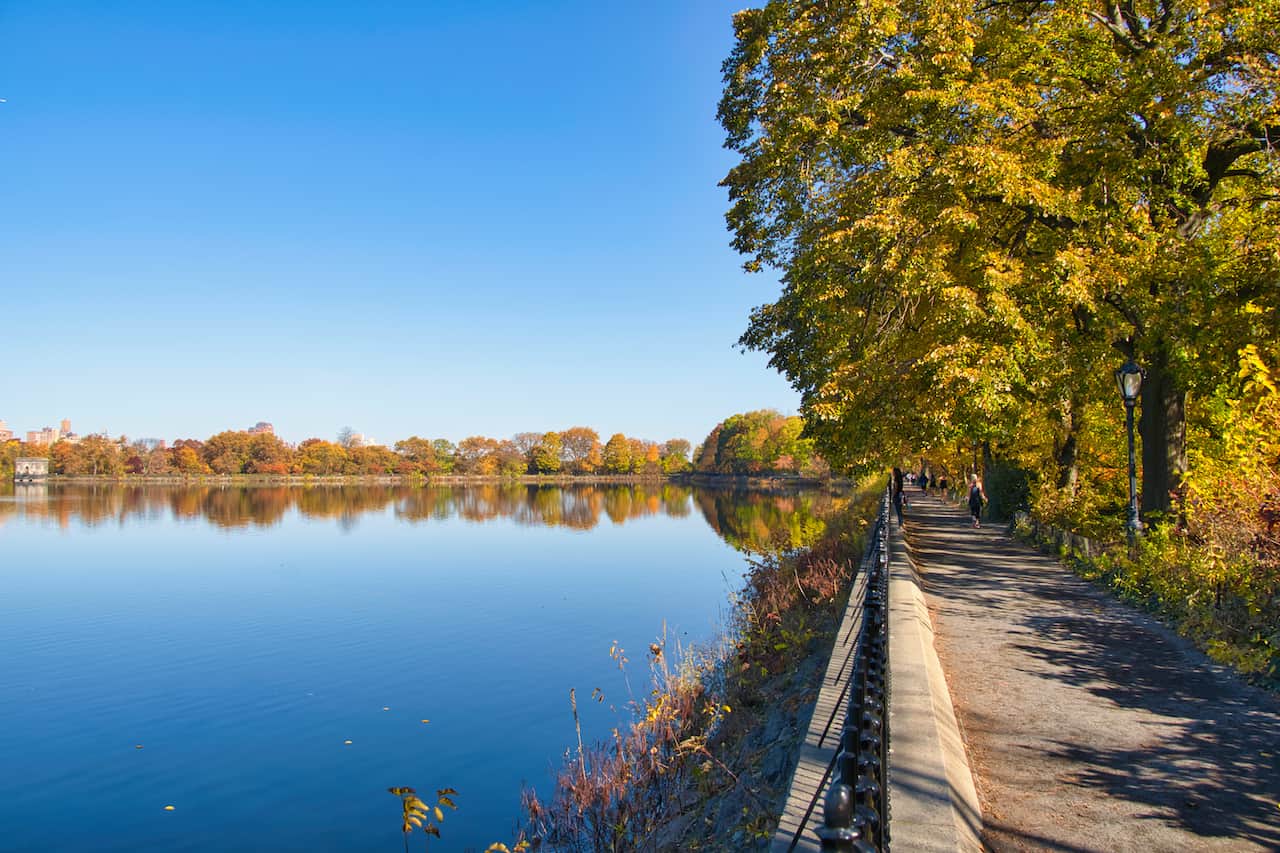 During your walk up the east side of the Reservoir you will come across the “main” entrance to the running loop on 90 Street near the Engineer’s Gate.

During this portion of path you will also be able to see the Bridle Path and East Drive off to your right hand side – remember you can also enter at various points along the way here when the Bridle Path happens to be directly next to the Reservoir loop.

From right around this area you will be able to see both the western and southern skylines of Central Park all in one shot. Check out the images below, which shows the vast view from around this spot on the running track! 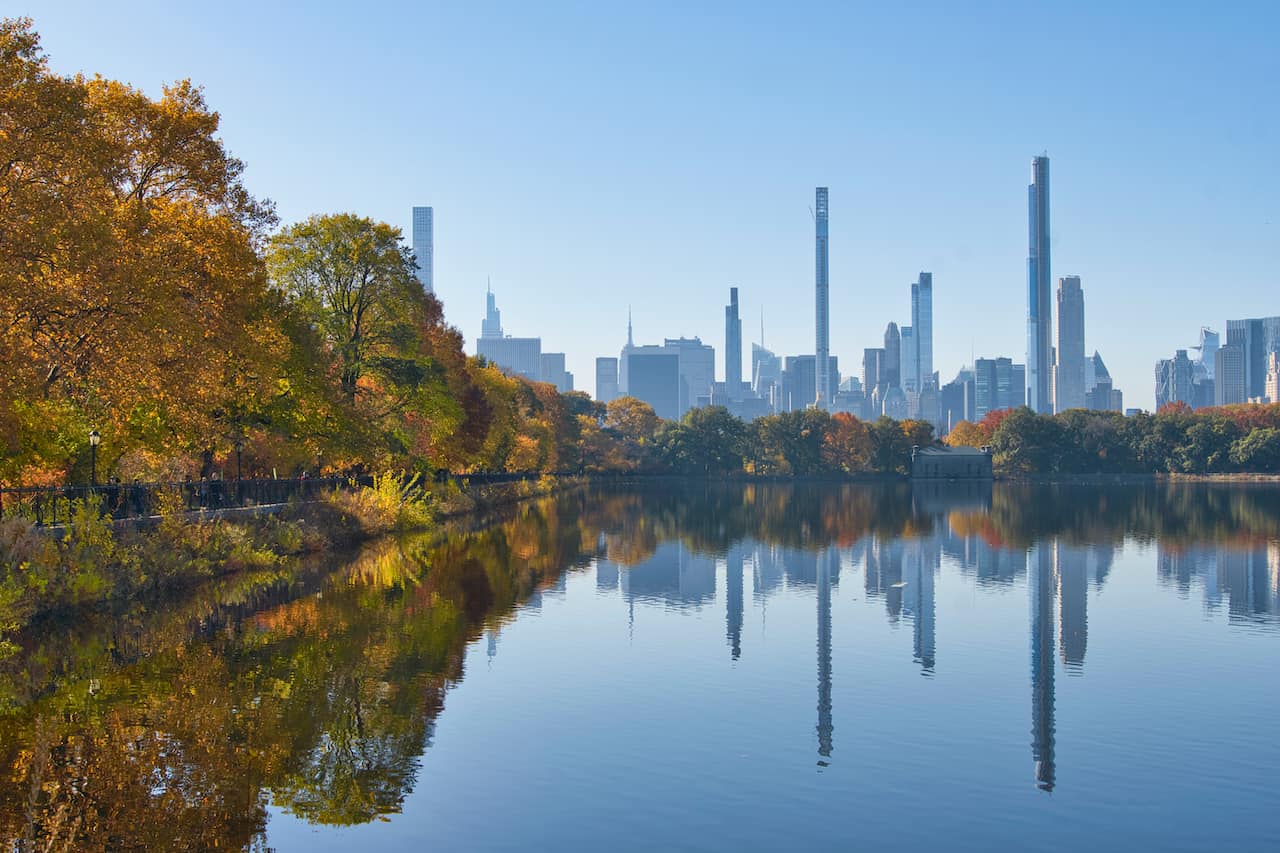 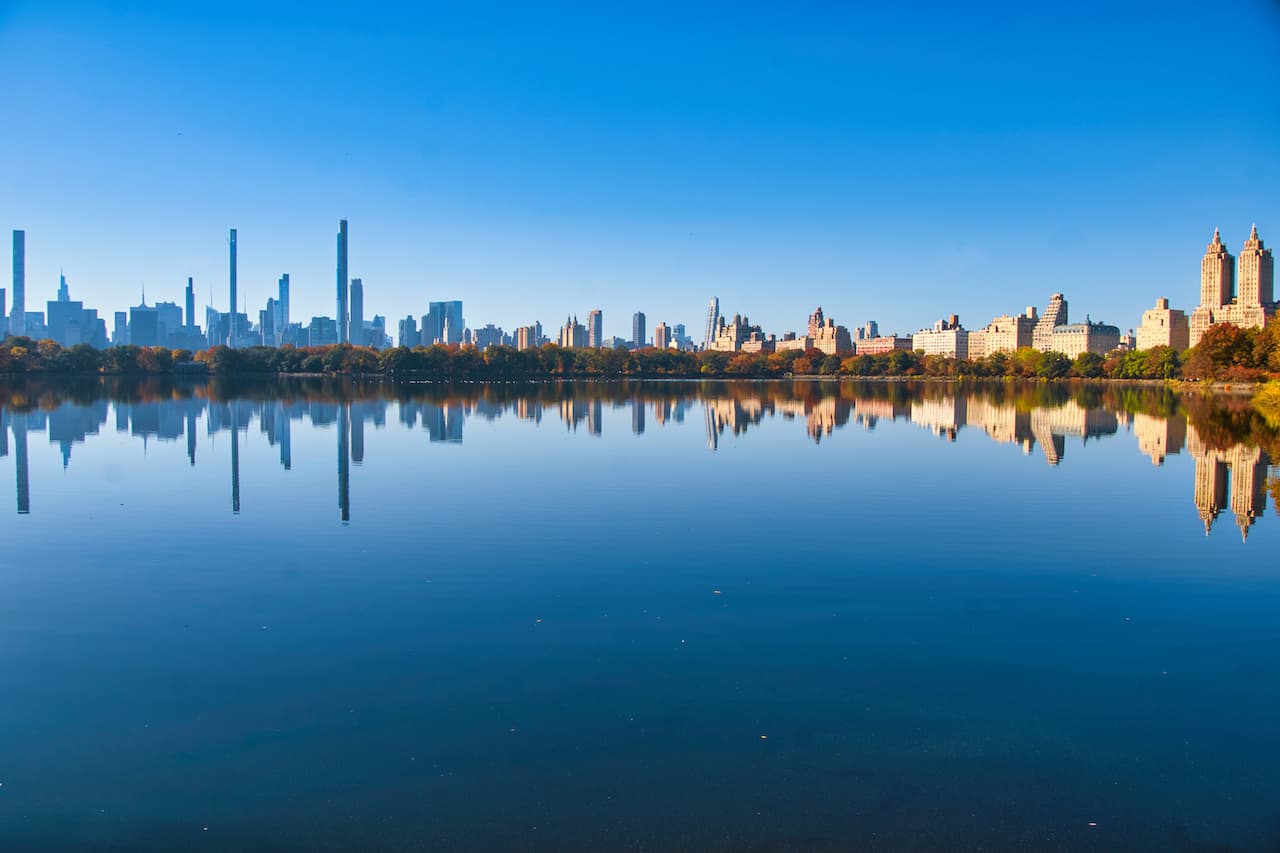 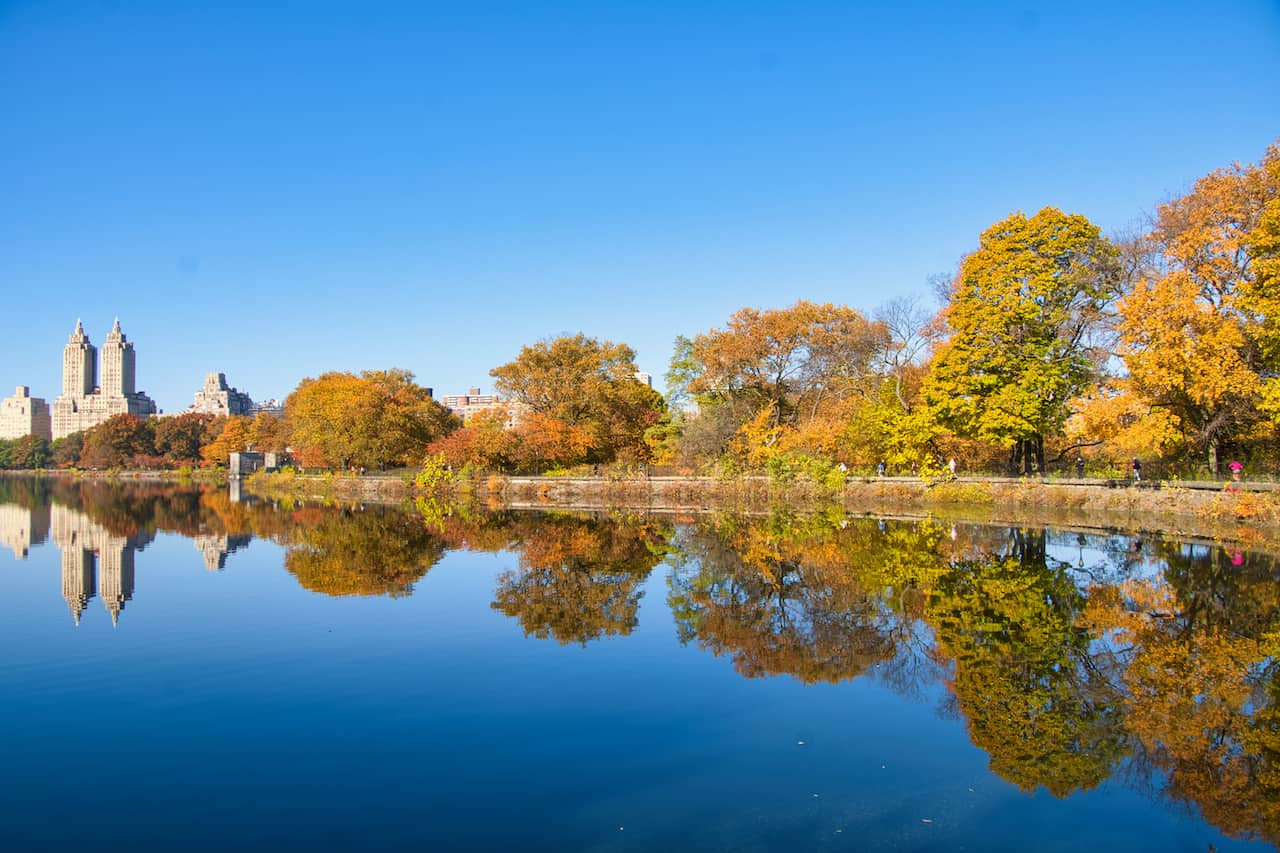 Right as you are taking in the view of the skyline, you will also see the North Gate House nearby (another potential spot to enter the loop if coming from up north). After the Gate House, the loop will start to begin to head back downtown on the west side of the reservoir. 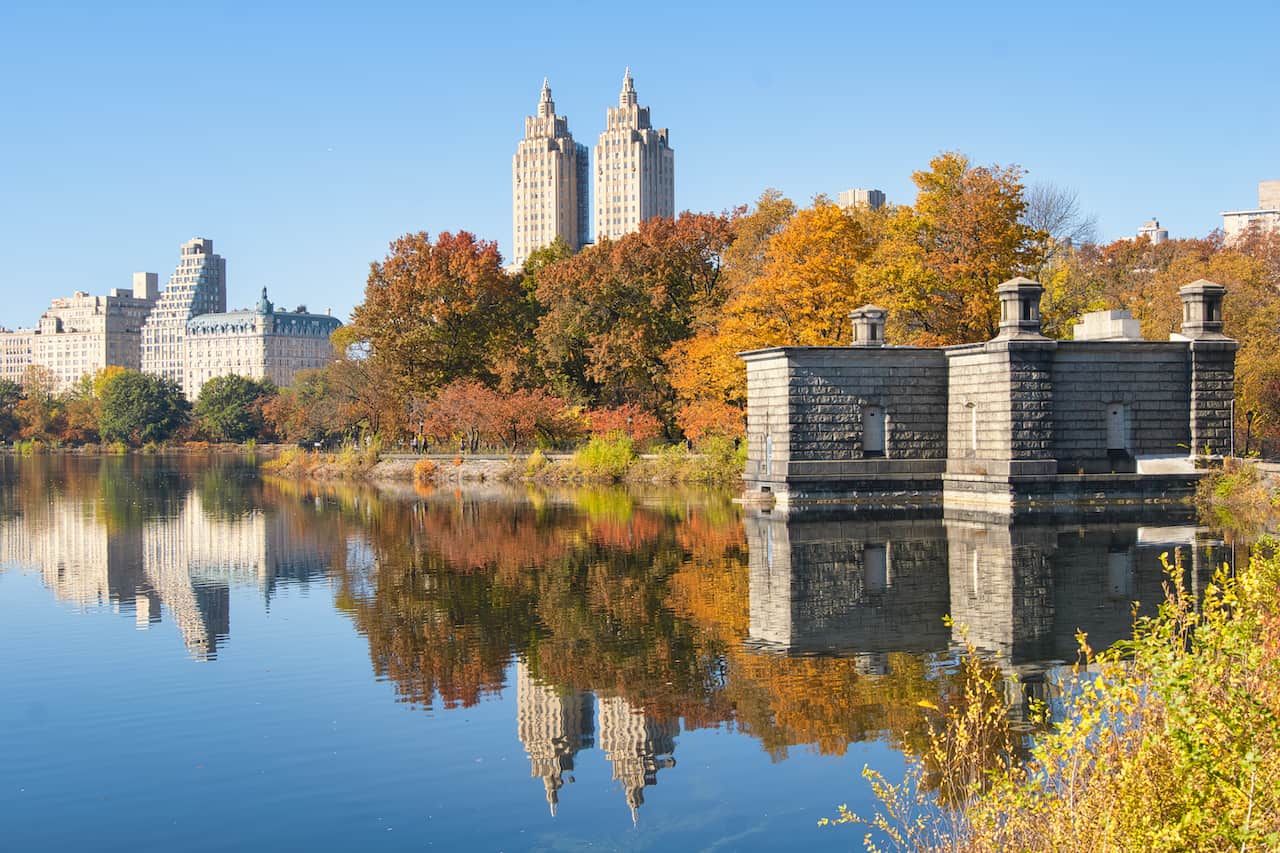 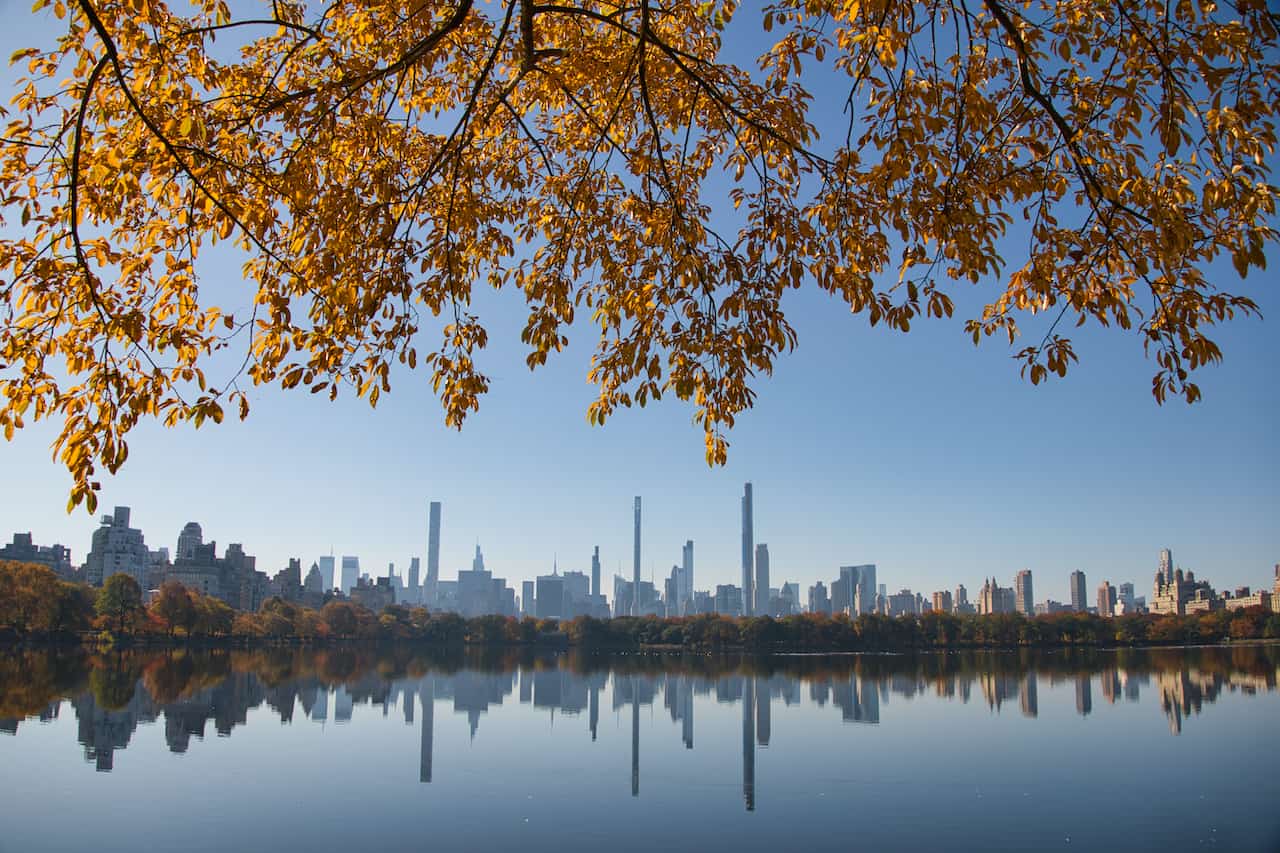 You will have some final views of the southern skyline alongside the foliage, before some of those buildings slowly go out of view. You will continue to walk or run the tree lined path southbound as you enjoy some views of the eastern skyline of the park.

Along this western side of the Reservoir loop, the Bridle Path (and West Drive), can be easily accessible if you decide to hop on/off the loop at one point or another. 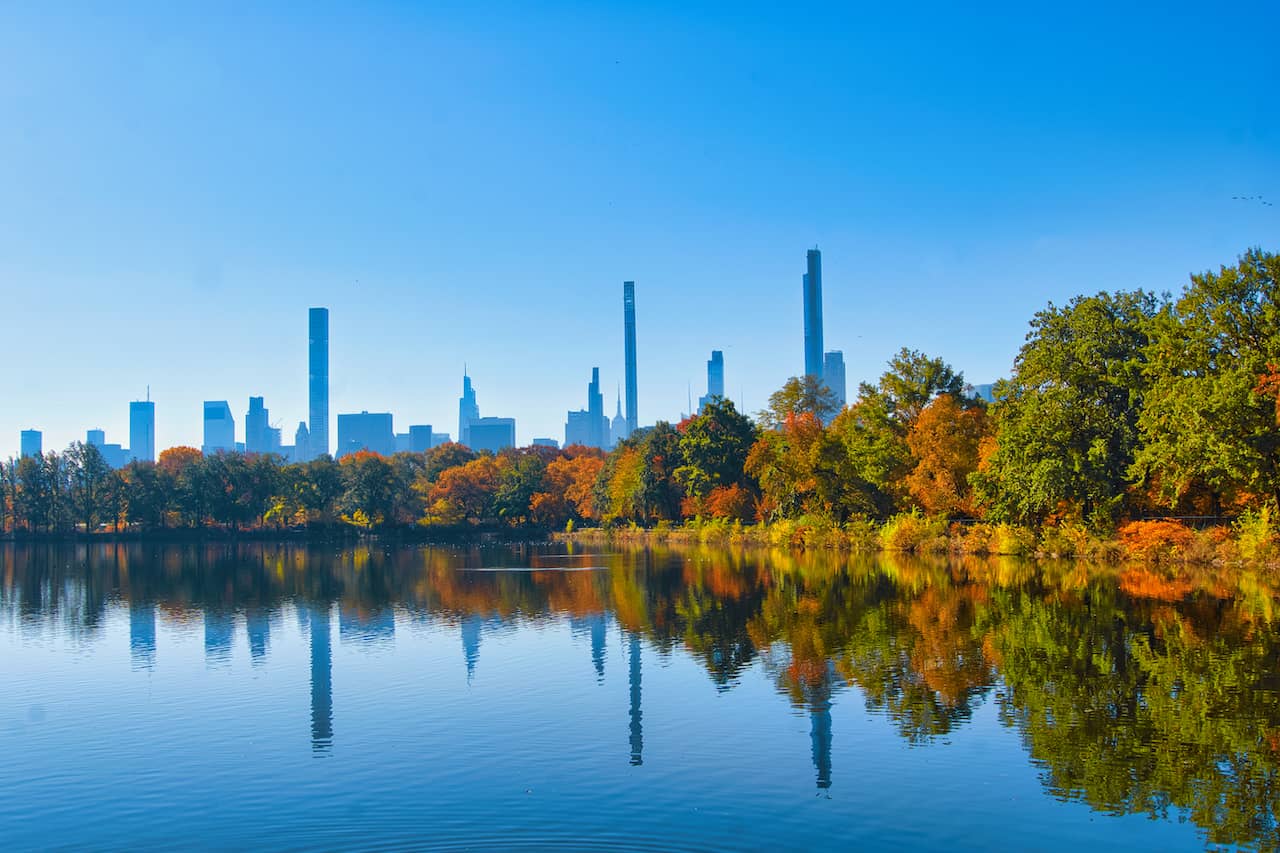 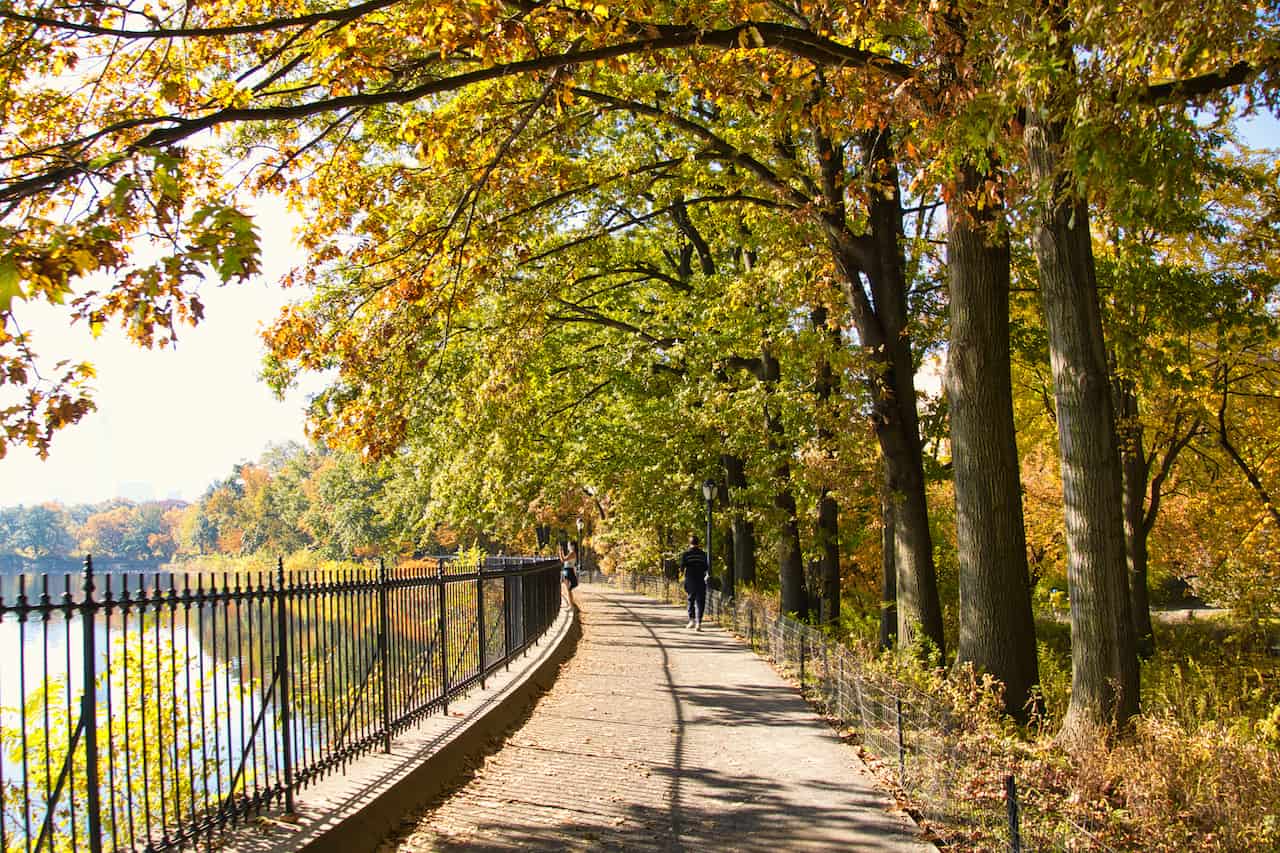 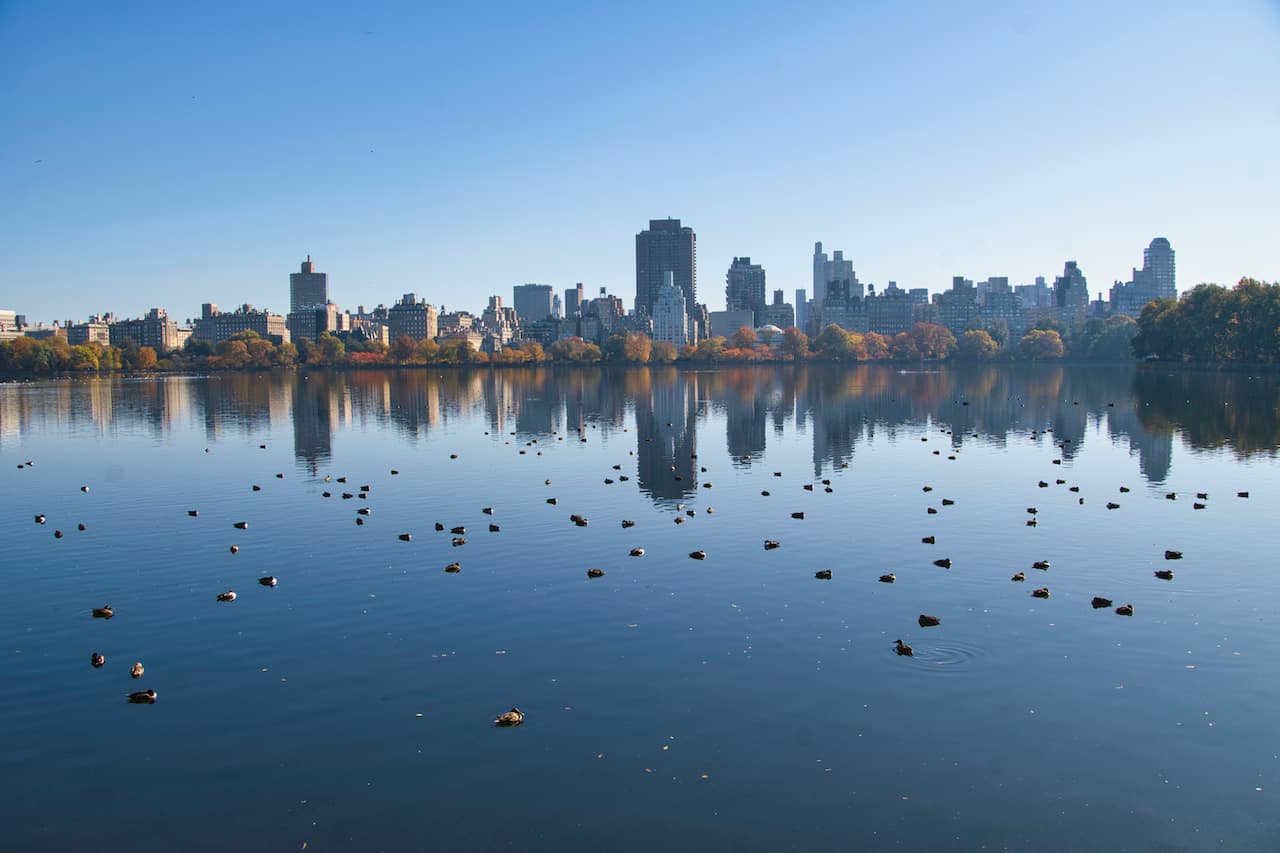 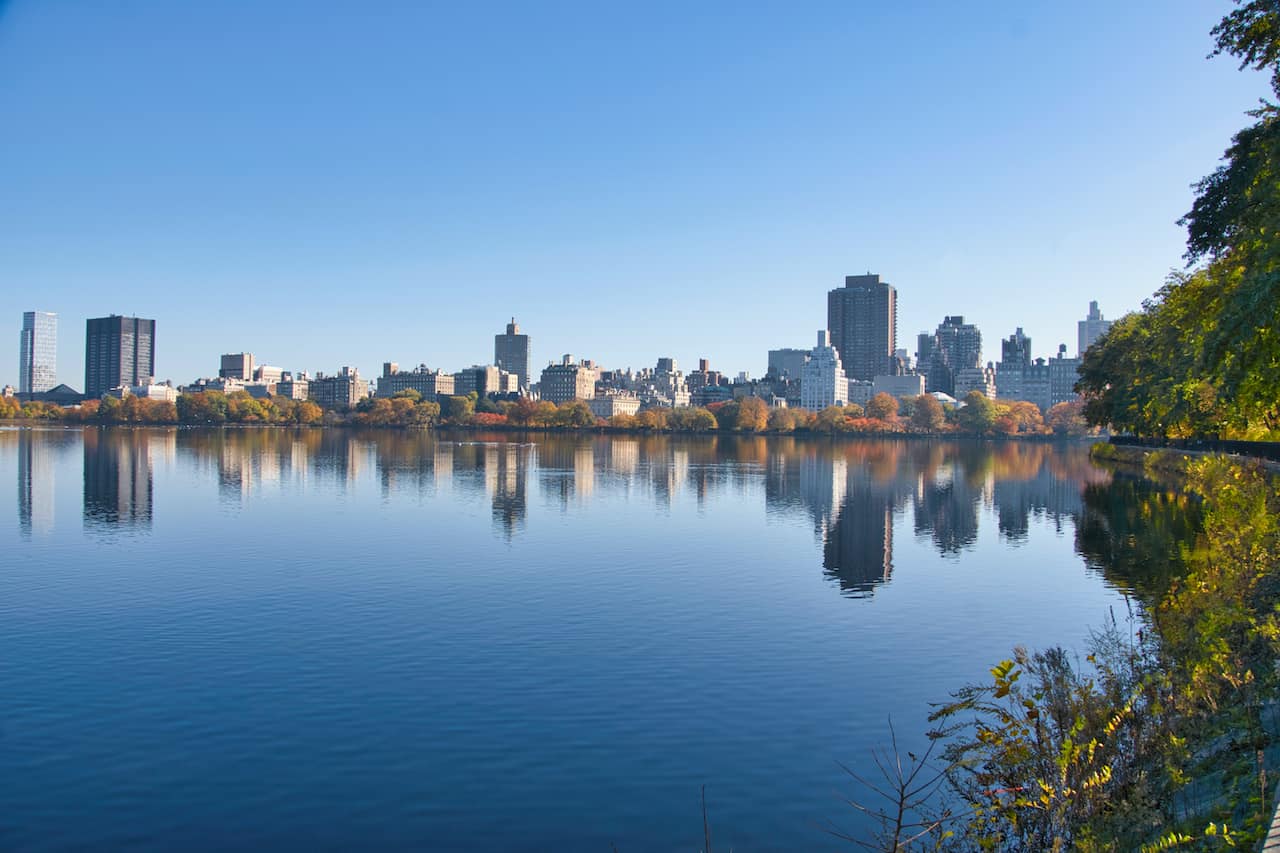 Soon enough the west side of the loop will come to an end and you will soon be heading on the southern part of the track with the South Gate House right in front of you.

That will be the end of the famous Central Park Reservoir Loop, and it is then time to head onto your next destination of the park! 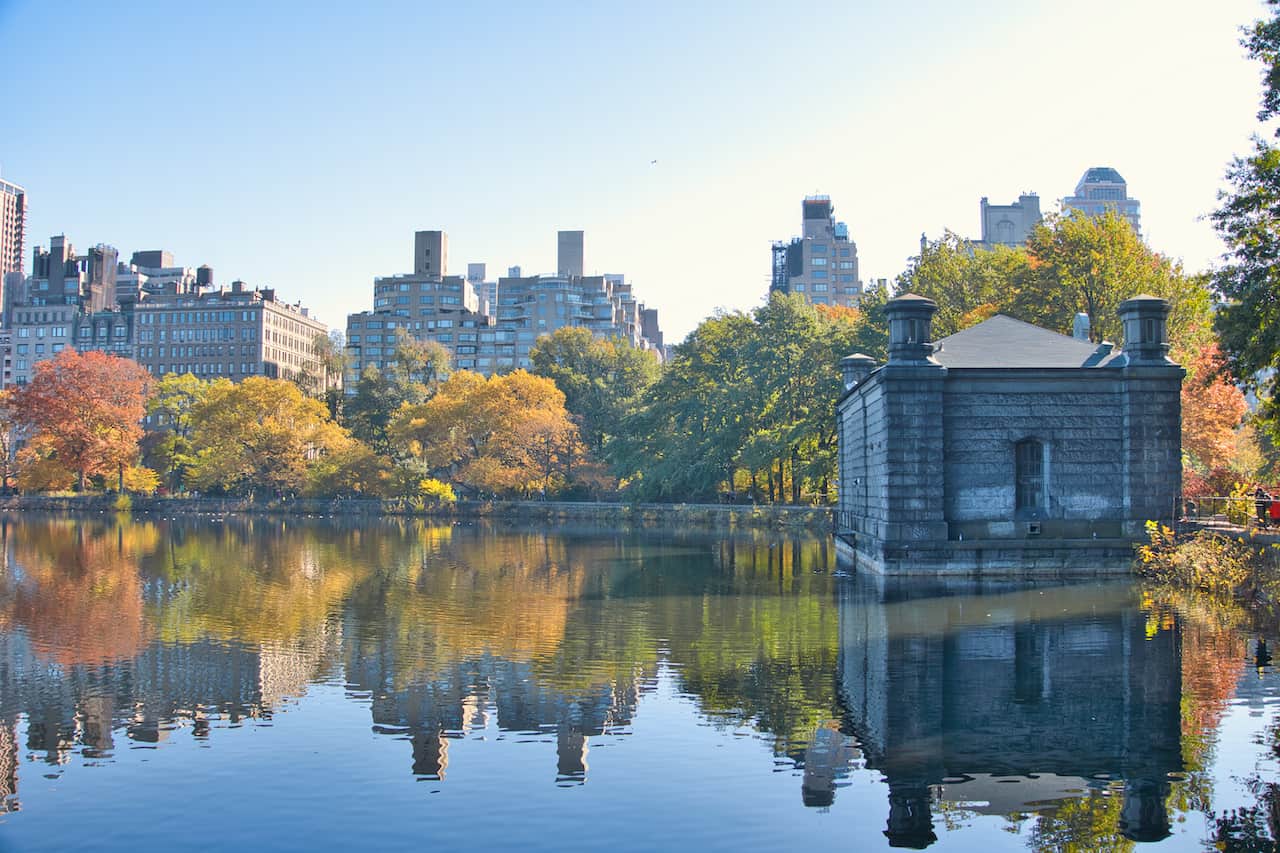 A great add on to a day in Central Park is the Ravine and North Woods trail at the very north end of the park. You can potentially add that in as a detour from the north end of the Reservoir. If coming from the south be sure to head across the famous Central Park Bow Bridge too into The Ramble. Check out the linked guides to learn more!

Learn about all of these and more by checking out the other New York travel guides I have up on the site, like the ones about the Manhattan Bridge Walk and the Brooklyn Bridge Walk.

I hope this guide has given you a better idea of how to visit and what to expect at the Central Park Reservoir loop trail. If you have any questions or comments about the path, feel free to add them in below. 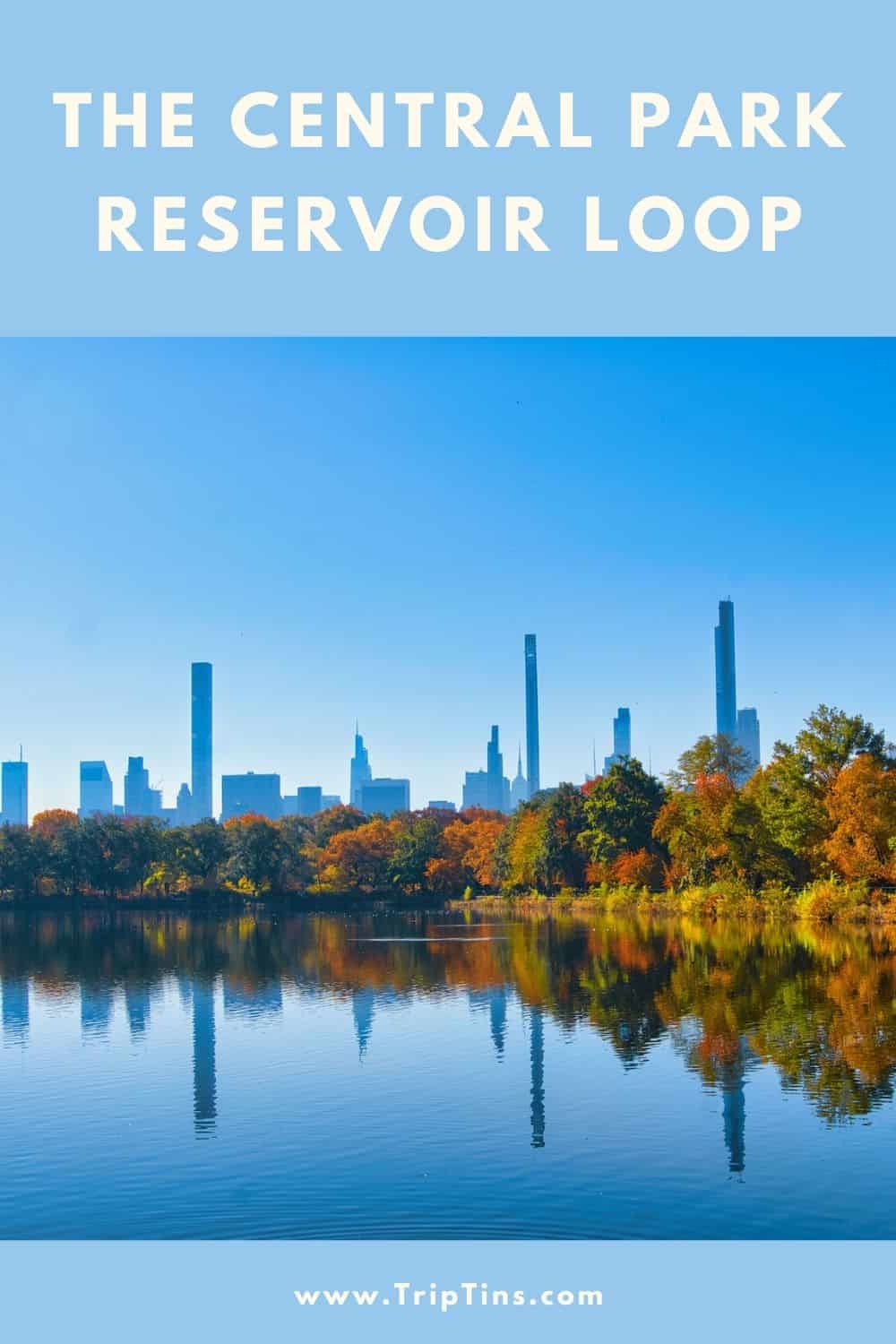 The Ramble of Central Park | Trails, Viewpoints, Map and More

A Complete Guide to Running in Central Park

Yes, Tnx! Folks intentionally walking clockwise despite some notices are quite annoying -- particularly, these days, those not even wearing masks. I wish the Conservancy would make more "one way" signs that are posted inside (on the fence) and not just at a few entrances. Tnx for the link to the bird sightings. It is wonderful.

Tnx for info and pix. Two Questions: 1. RE Inside/waterside vs outside/bridleside along the track. Is there a preferred protocol for which side runners should run vs where walkers should walk? 2: RE Bird spotting. Is there a website where birders have cataloged and identified water birds seen on the reservoir.

Hi Mark - to answer your questions..

1) I don't believe there is a set side (inner vs outer) for walkers and runners. Usually on the narrower paths like this, it is basically stay to the right and then pass on the left. So if you were just walking/running the path, I would say stay on the right hand side until you catch up to the person in front of you, when you can then pass on the left.

I will say however that if you are interested in taking pictures of the reservoir, you should have no trouble getting along the fence and out of the way of the runners/walkers on the path. Also just a reminder - counter clockwise only!

2) I am not a bird watcher myself but I did come across a great twitter feed of Central Park bird spotting - https://twitter.com/BirdCentralPark. Hopefully that can help out a bit.