On day 5 of the Everest Base Camp trek, you will head from the village of Tengboche to the village of Dingboche. It will be an absolutely beautiful day as you make your way through the valley with the glacier river down below and the snow capped peaks out in the distance. Along the trek you will pass by the village of Pangboche as well as the famous mountain of Ama Dablam, surely making this a memorable day of your Nepal hiking experience.

Below you will find some of the key details for what to expect on the trail between Tengboche and Dingboche.

*Elevation gain is the true amount of elevation gained for the portion of the trail. Net elevation is just the difference in elevation between Tengboche and Dingboche.

» Learn more about the various distances, elevations, and durations of the Everest Base Camp Trek

Below is the elevation profile for the route between Tengboche to Dingboche. As you can see at first, the hike actually has a descent to begin the day as you head down into the forest below. However, after the first 2 km / 1.2 miles, the remainder of the trail will be the slow ascent towards Dingboche.

What is also nice about day 5 is that the hike to Dingboche will be mostly on a slight incline without those steep uphills or downhills (unlike some of the previous days on trail). For the most part, it will be on a comfortable flat / steady incline throughout the day. 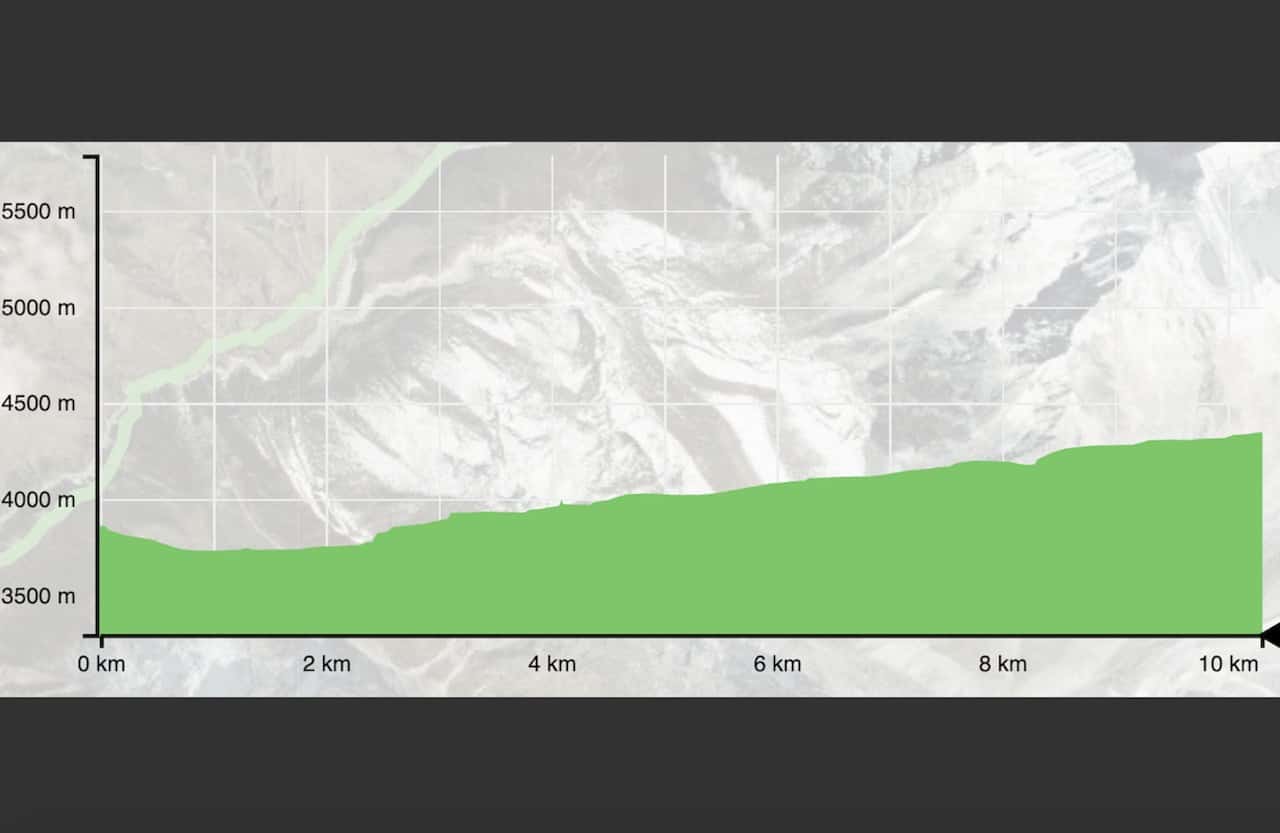 I also wanted to include the trekking map for the day between the two villages. Since Tengboche is located in the middle of the valley, you will first head down and across to the side of the valley wall.

From there you will continue along the valley wall until you cross the river and end up in Dingboche. 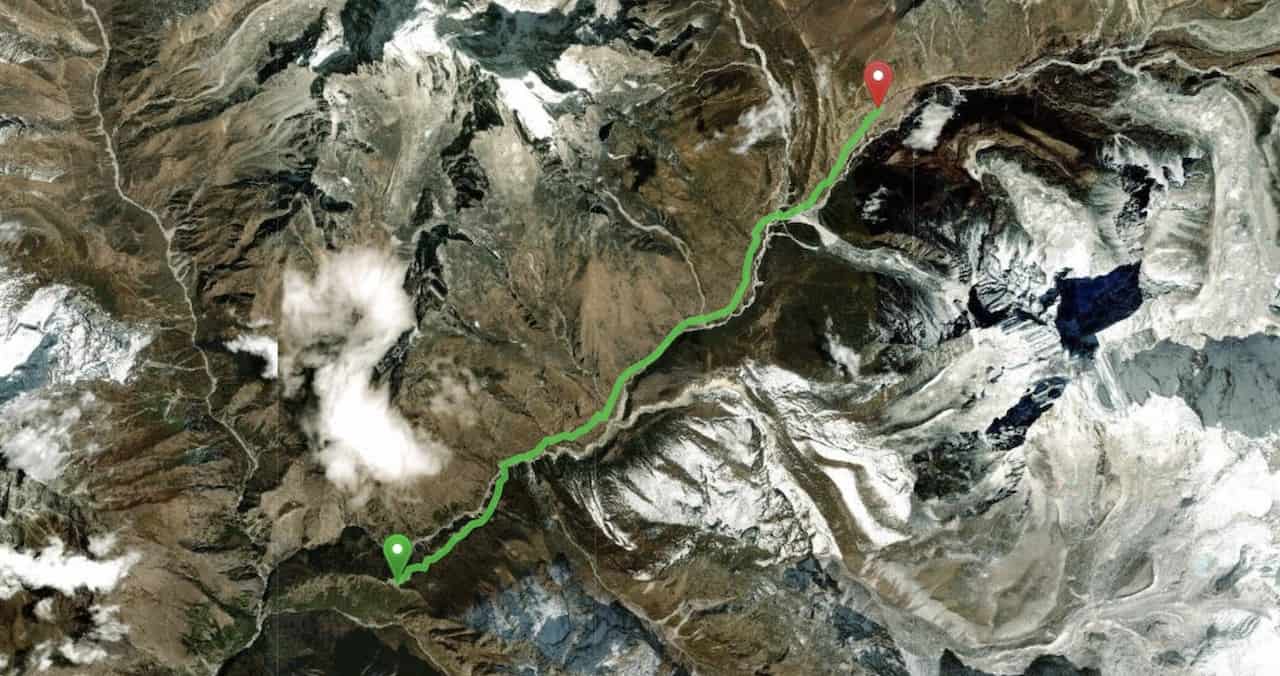 You will want to pack accordingly for this 11-day trek in the Himalayas. I put together a complete Everest Base Camp Packing List that goes over every single item I brought along on the trail. Below you can find just some of those recommended items that are including on the list: 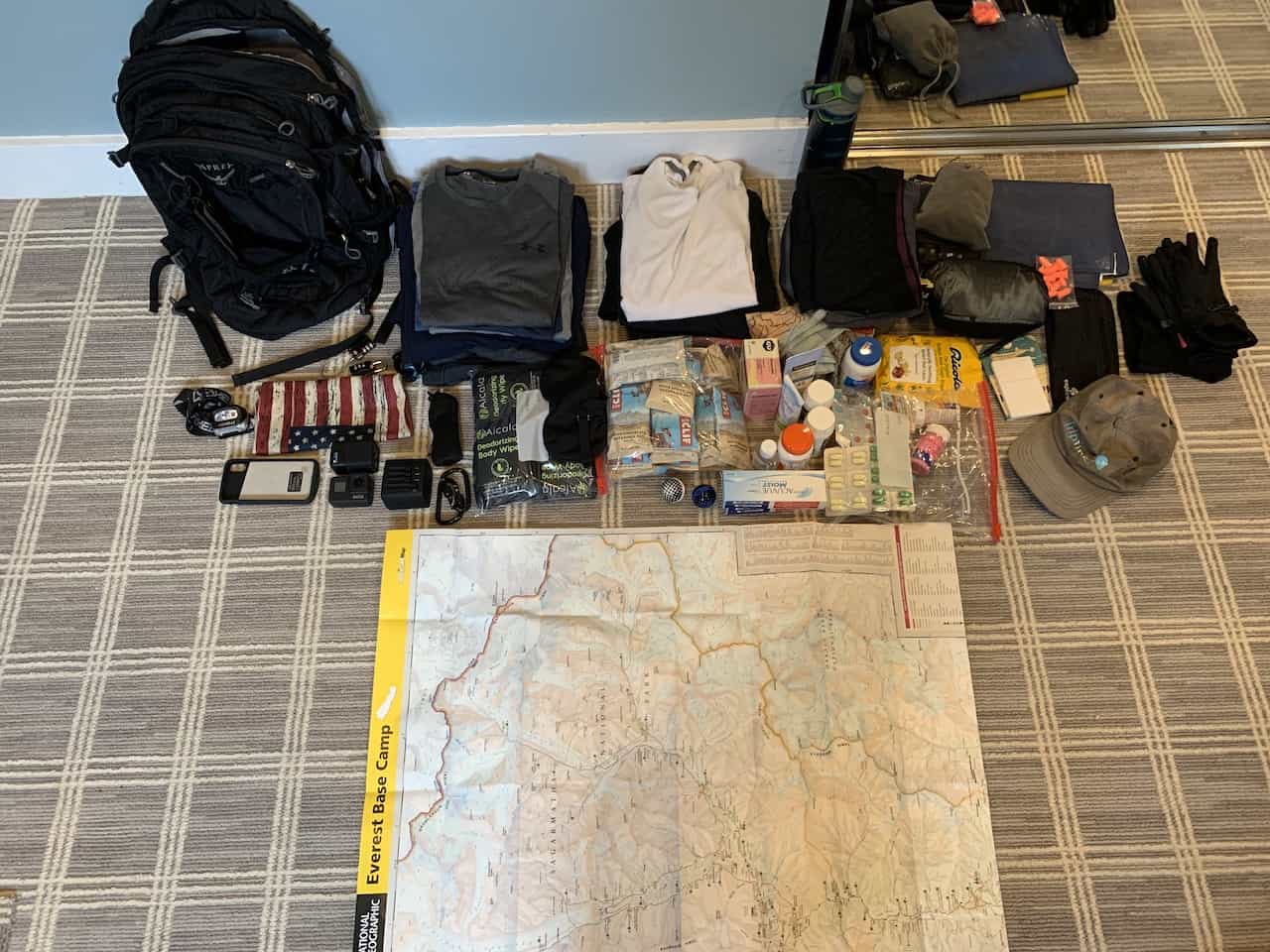 Now that you have some background for day 5 of the trek, let’s talk about what to expect on the trail itself.

Once you leave Tengboche, you will first begin a descent into the forest as you pass the small village of Deboche. This is another village option to stay in overnight if you are not able to find anything in Tengboche.

Once past Deboche, you will continue along as you gain some elevation and will eventually pass by a wall of inscribed stones. Soon after that you will cross a suspension bridge to take you to the left hand side of the valley as you walk along the valley walls. Out in front of you will be some vast views of Ama Dablam and the surrounding mountain landscape. 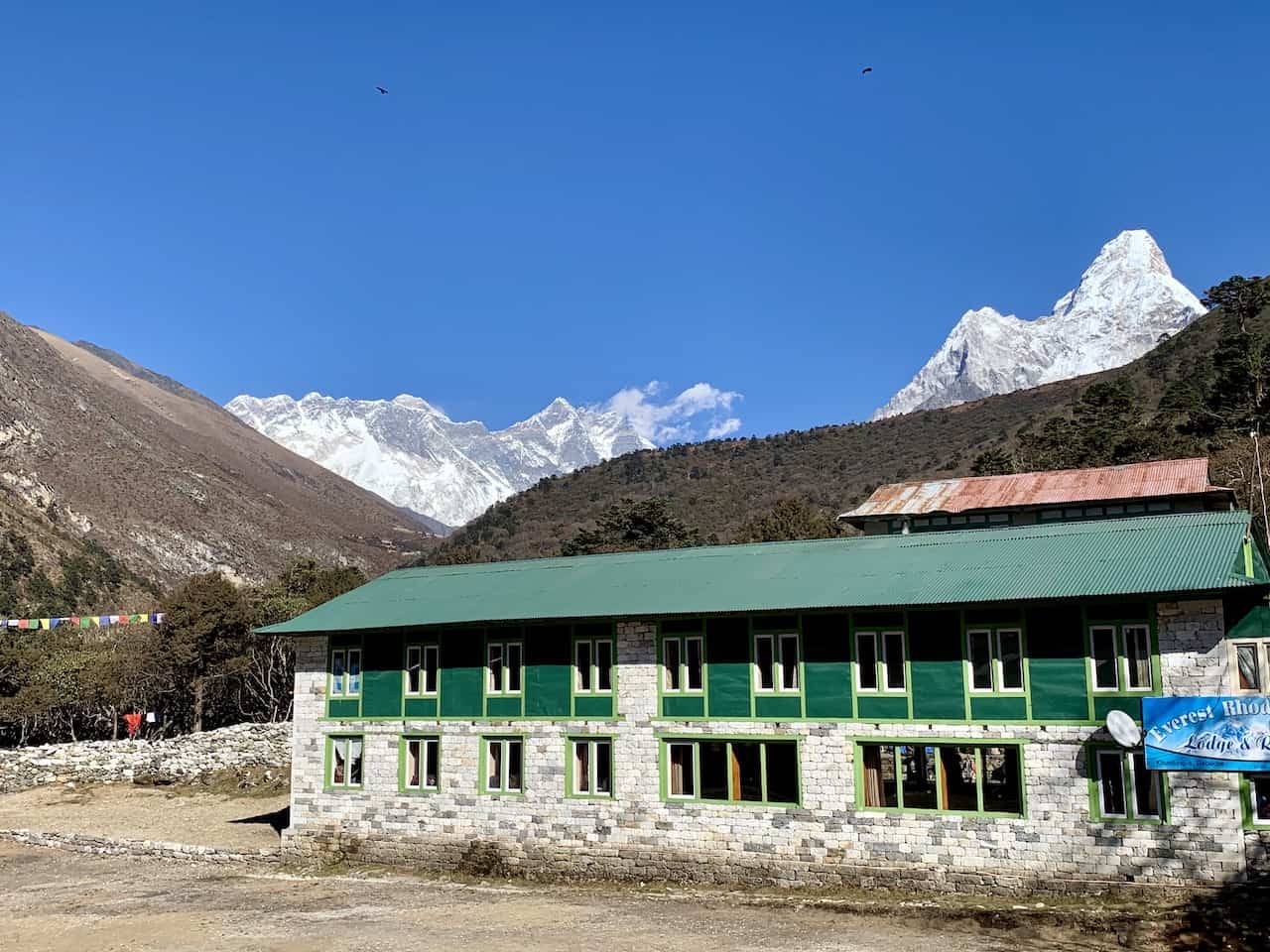 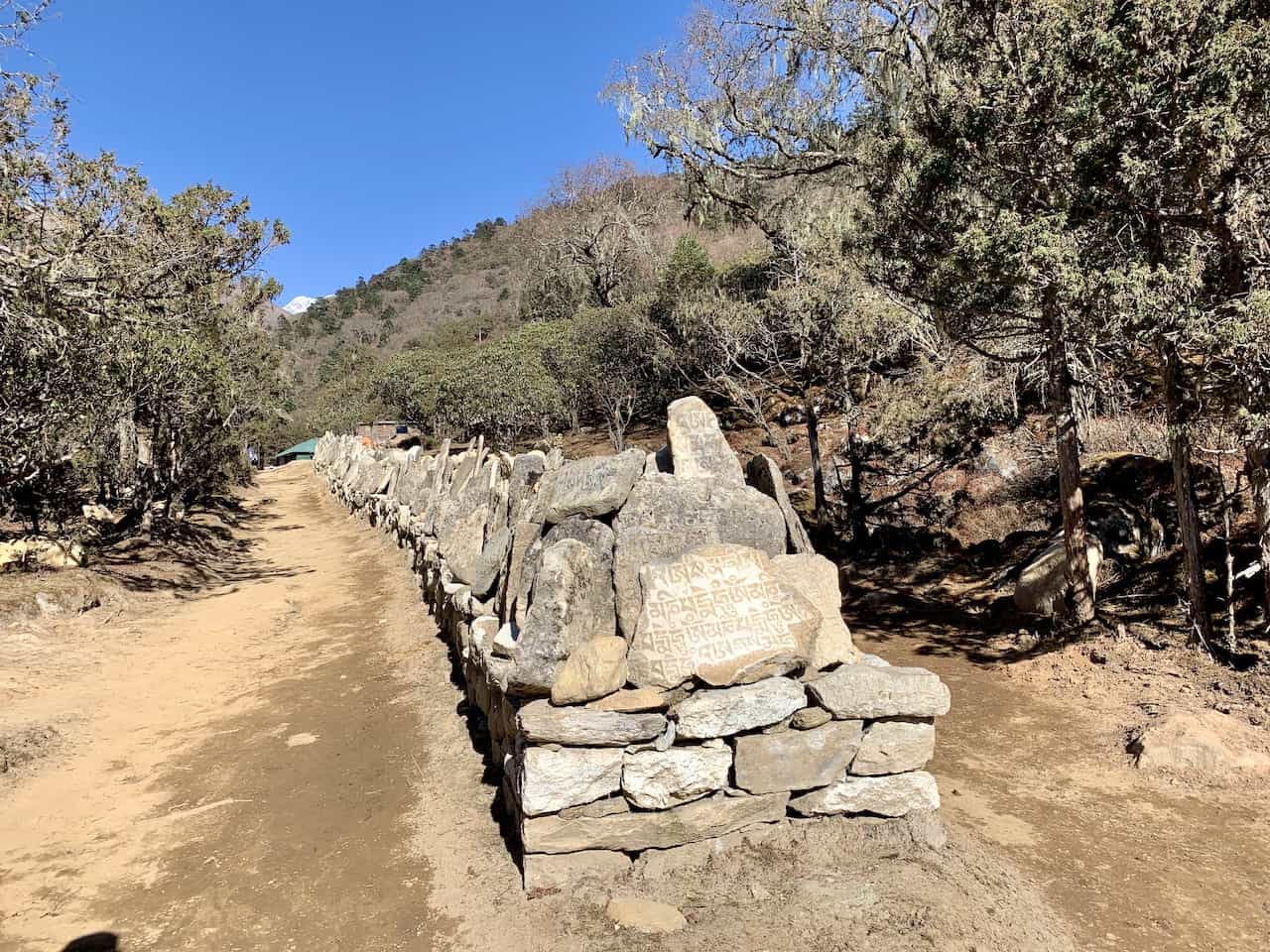 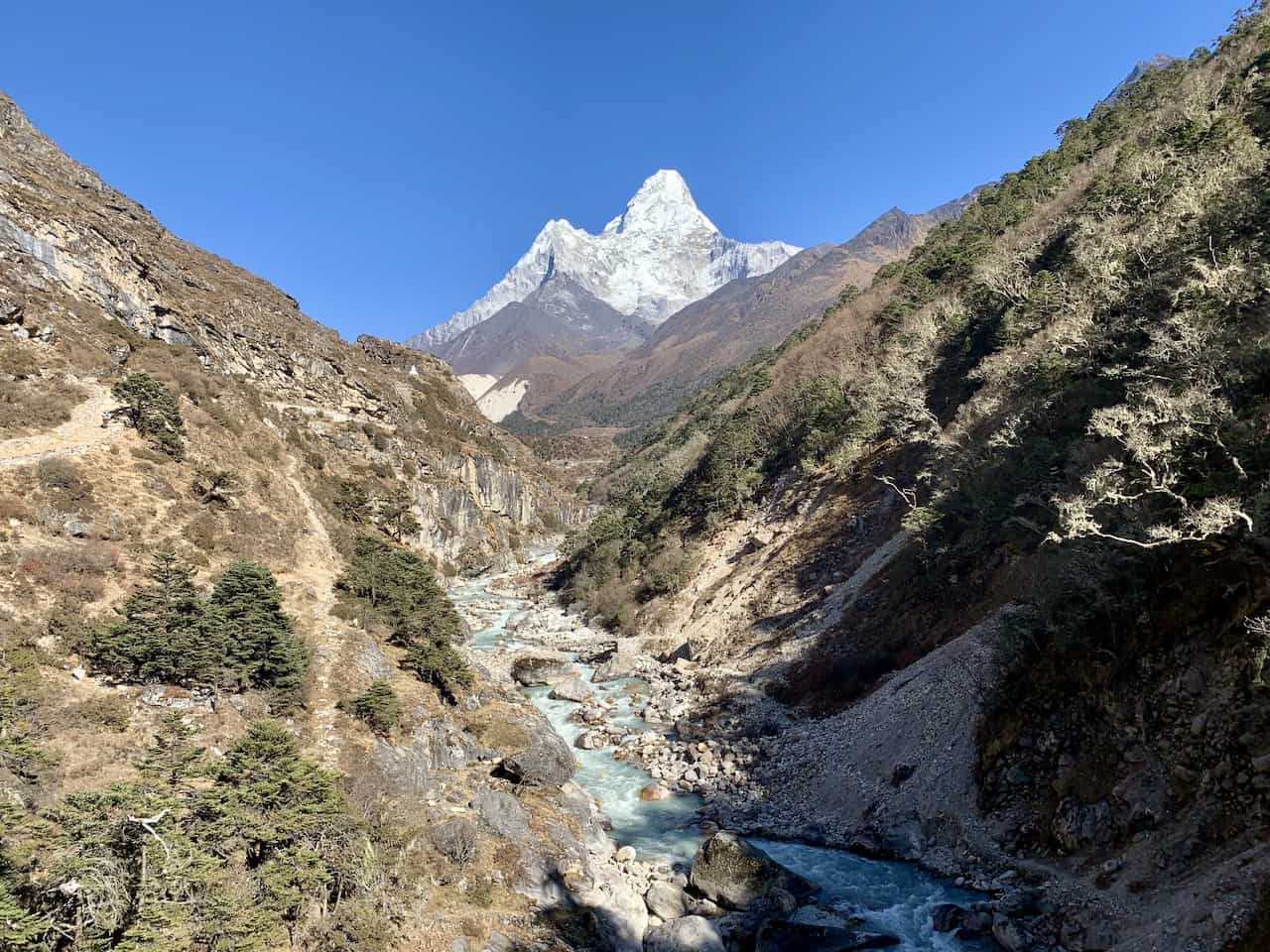 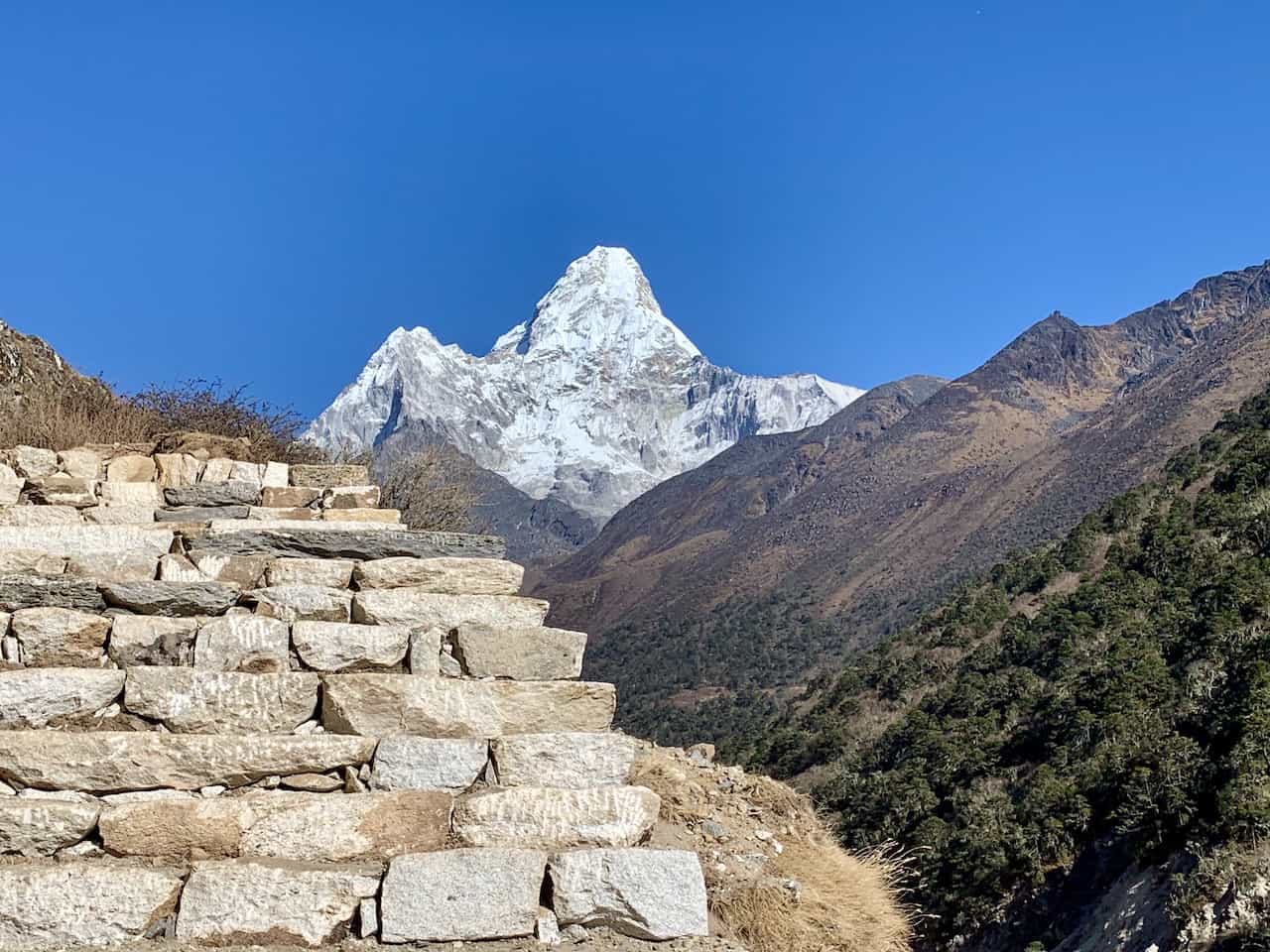 About two hours after leaving Tengboche you will approach the village of Pangboche, where you can take a break and enjoy views of the Everest Mountain Range out in front of you.

» If you have some extra time on your trip, you can add a day to visit Ama Dablam Base Camp. Check out the guide to learn more about the trek!

It is then time to continue on with your day as you leave Pangboche and head further up the valley. Throughout the remainder of the day you will slowly gain elevation. While it is uphill, it is on a relatively easy slope without those steep incline sections. 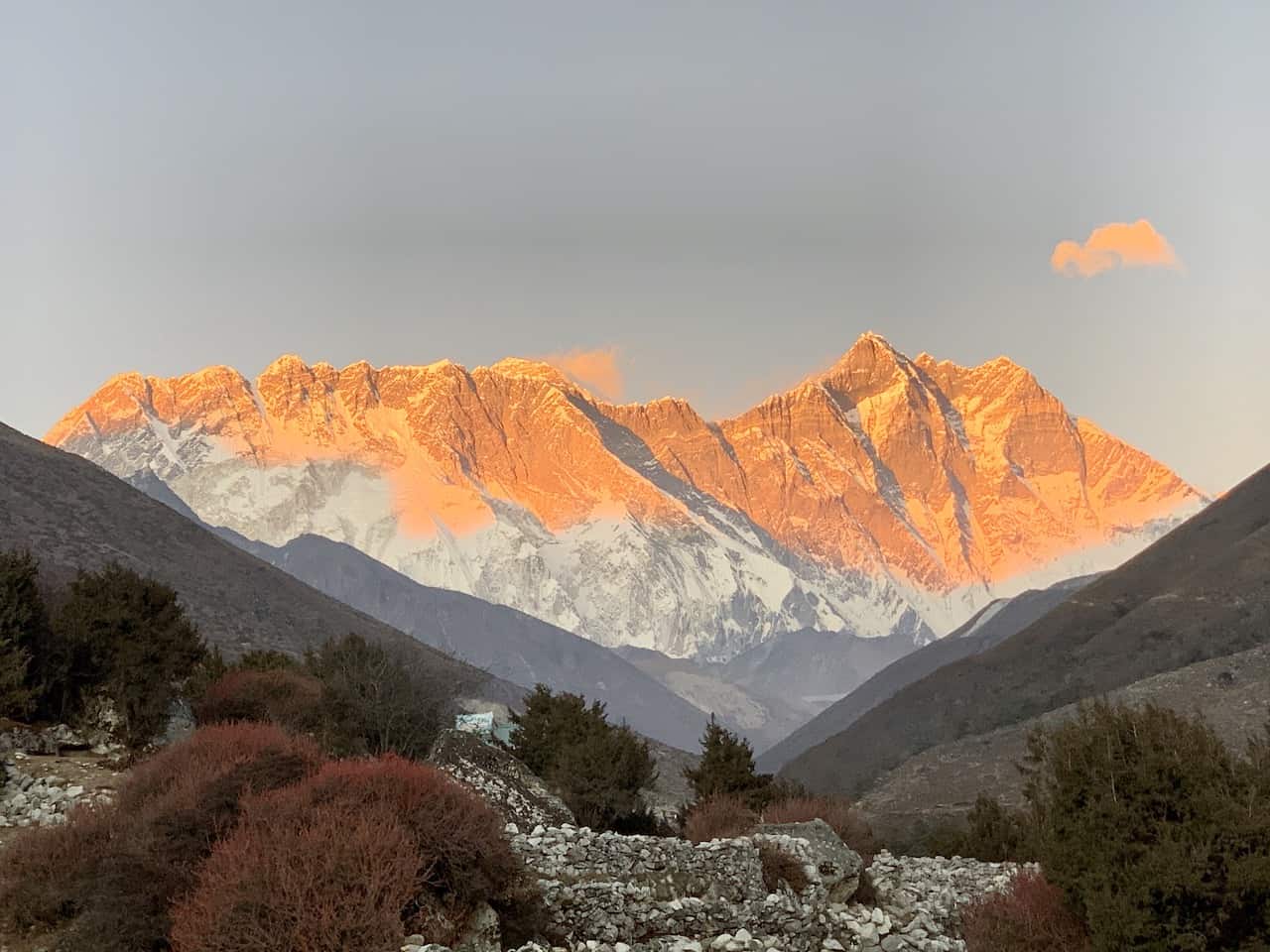 Out in front you will still have those Ama Dablam views as well as the views of the Everest Mountain Range. At this point though, you will only be able to see a very tiny sliver of the top of Everest, however Lhotse and Nuptse will be in better view.

Eventually you will also pass by the village of Shomare, which will be the last village before reaching Dingboche. As you continue along you will slowly pass Ama Dablam and have some different angled views of the mountain from before. 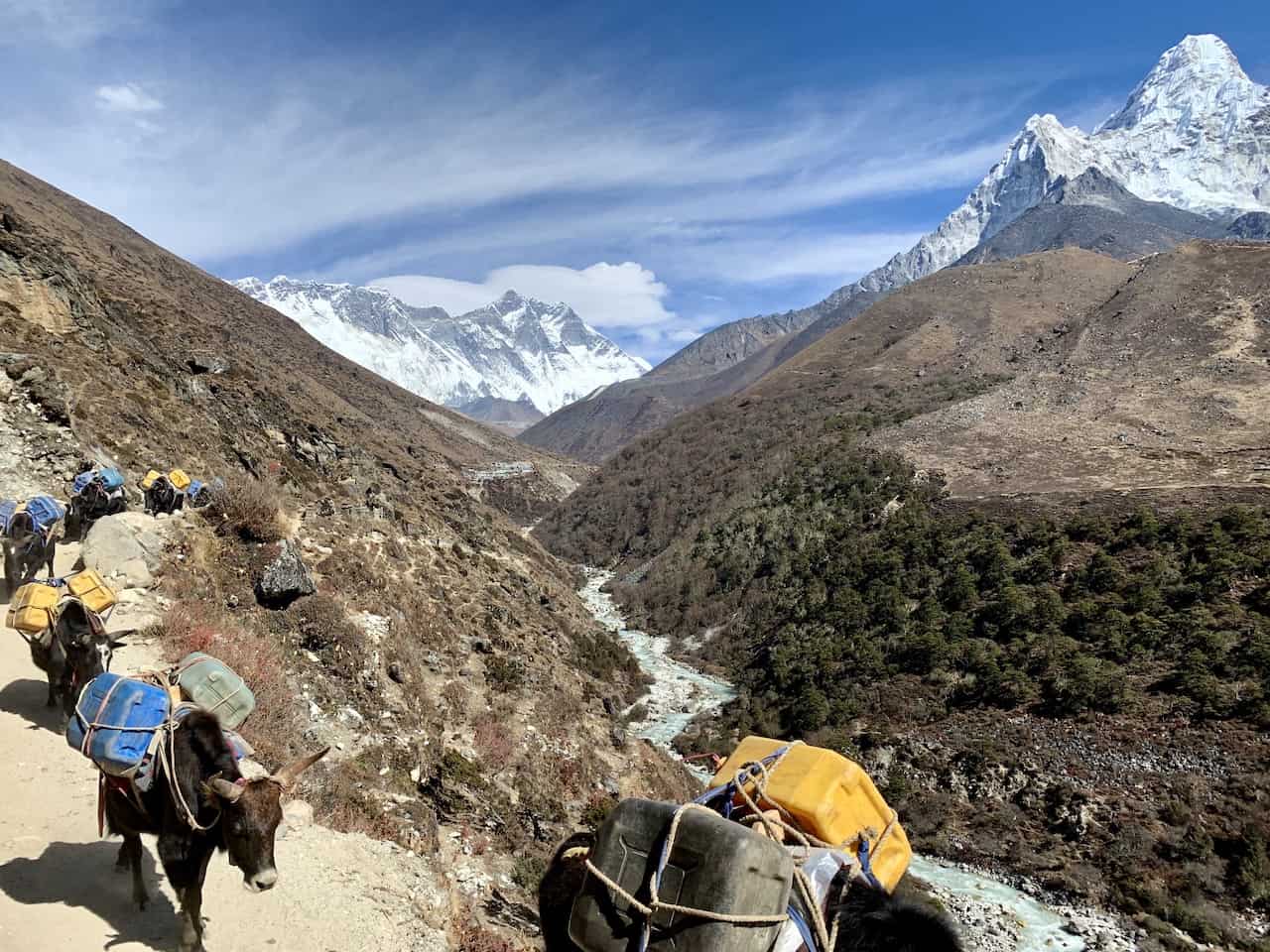 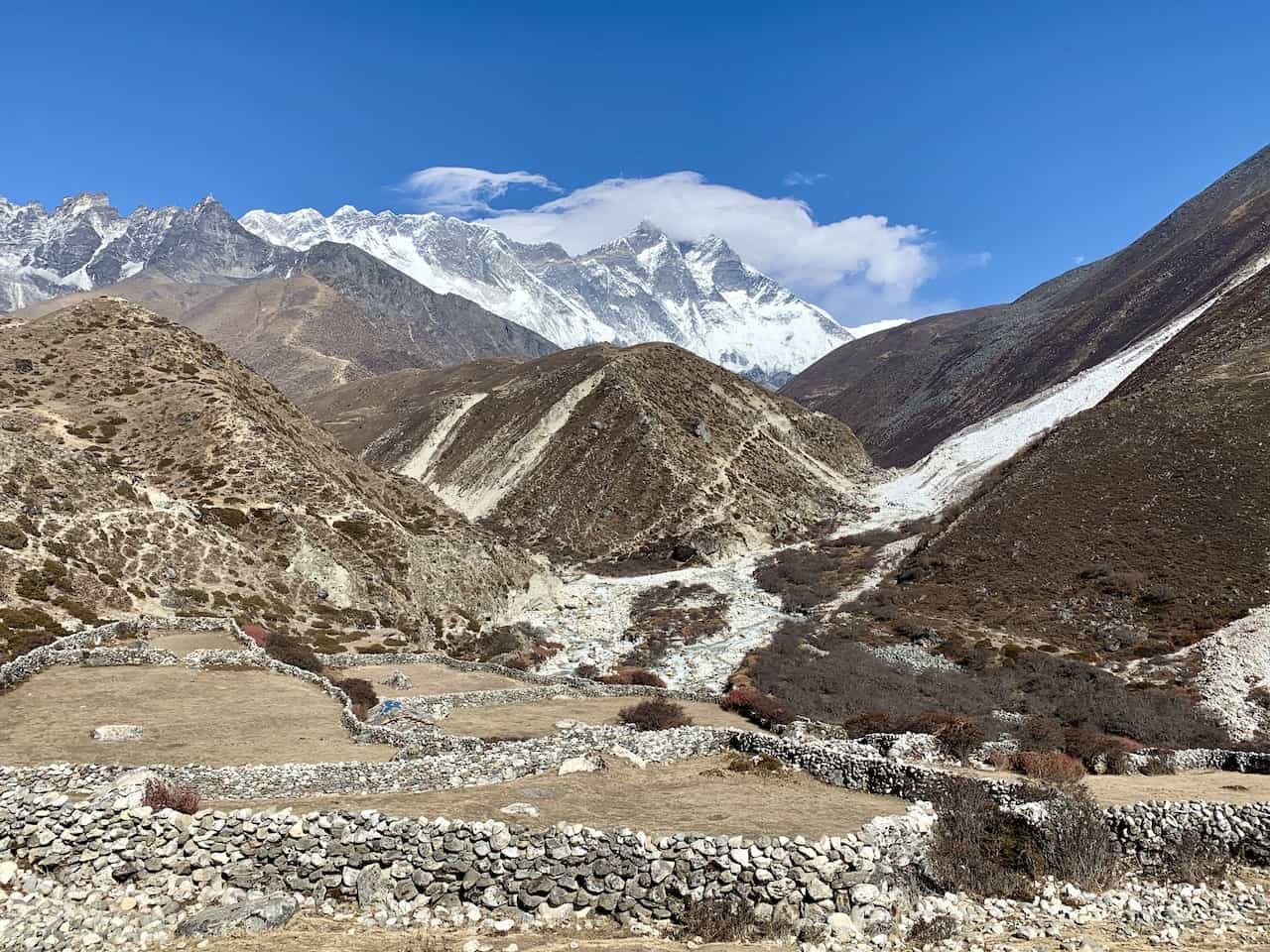 The path will continue to wind its way around the valley side as you eventually cross over another river and slowly approach Dingboche.

Once you arrive in the village, head on over to a teahouse, where you will be staying for the next two nights. Day 6 of the Everest Base Camp trek is known to be an acclimatization day, where you have the option of climbing Nangkartshang Peak located just behind town. 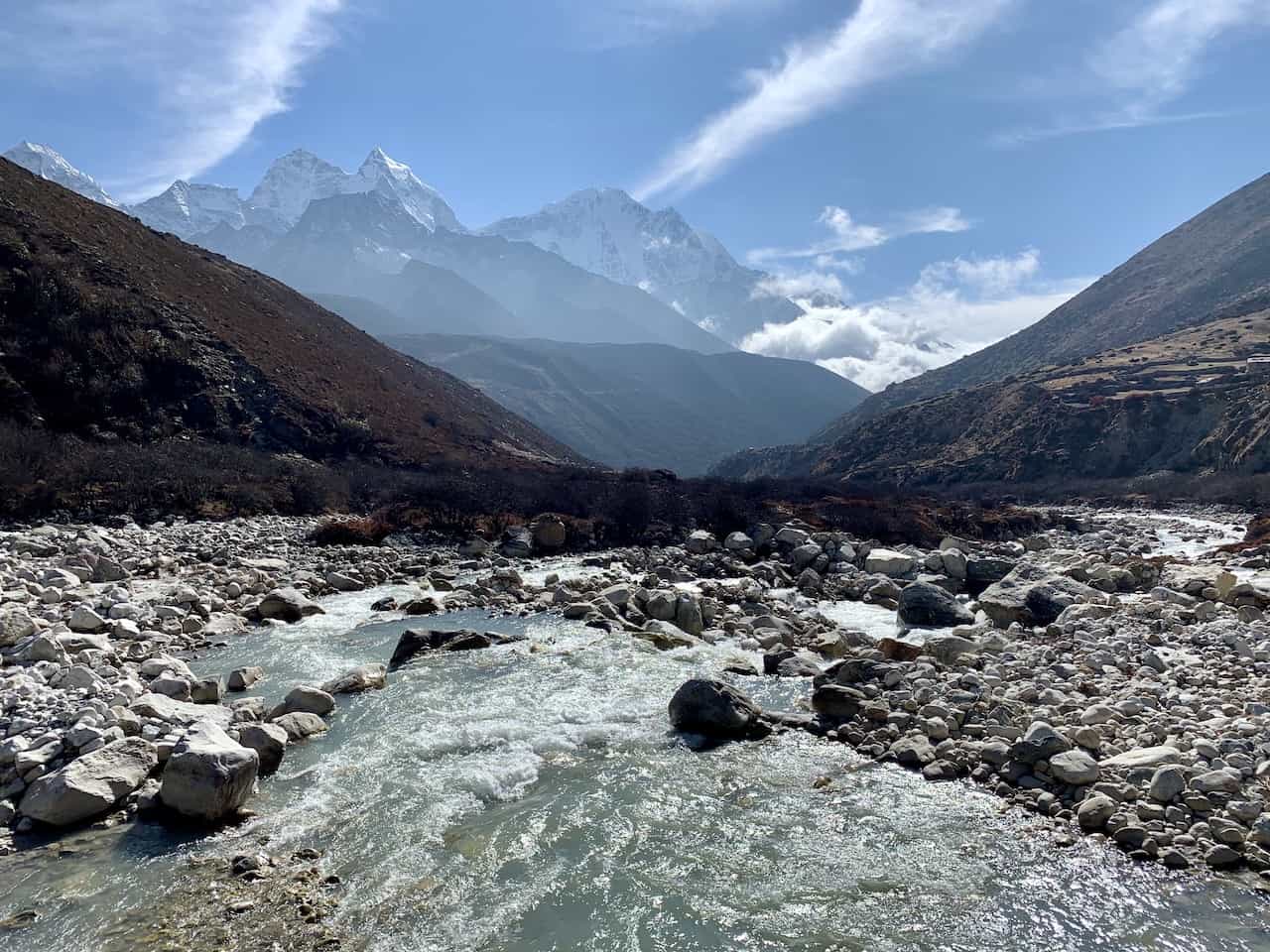 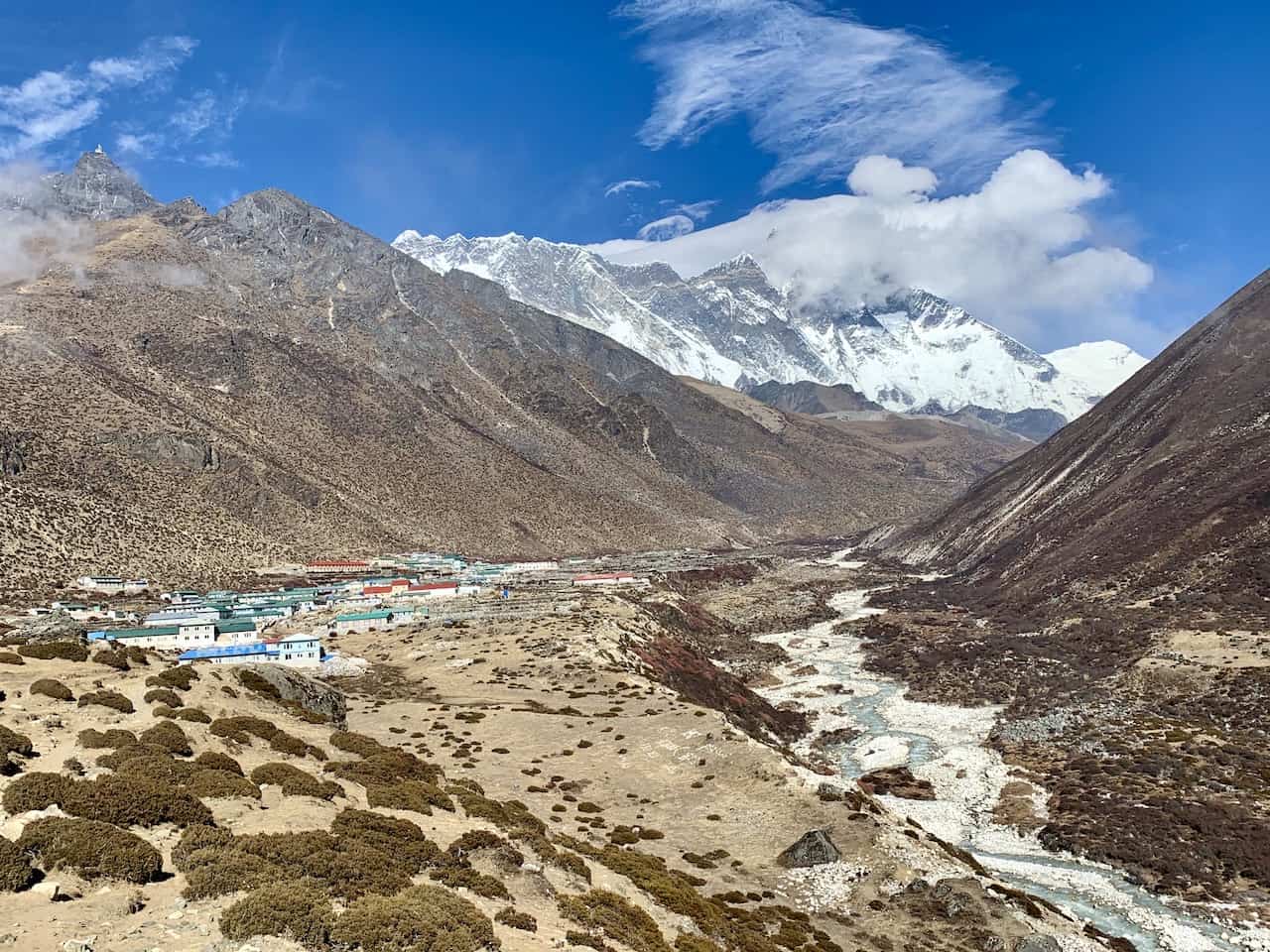 I wouldn’t overthink your accommodation choices too much on the trail in general. I found all the places I stayed at pretty much the same give or take.

Essentially, rooms will cost Rs 500 (less than $5 USD) for the most part, given you eat your meals at the teahouse as well.

In Dingboche I stayed at the Yak Hotel & Restaurant located in the middle of town. Some other options to choose from include Hotel Countryside Dingboche, Hotel Grand Himalayan, Hotel Summit, among several others. 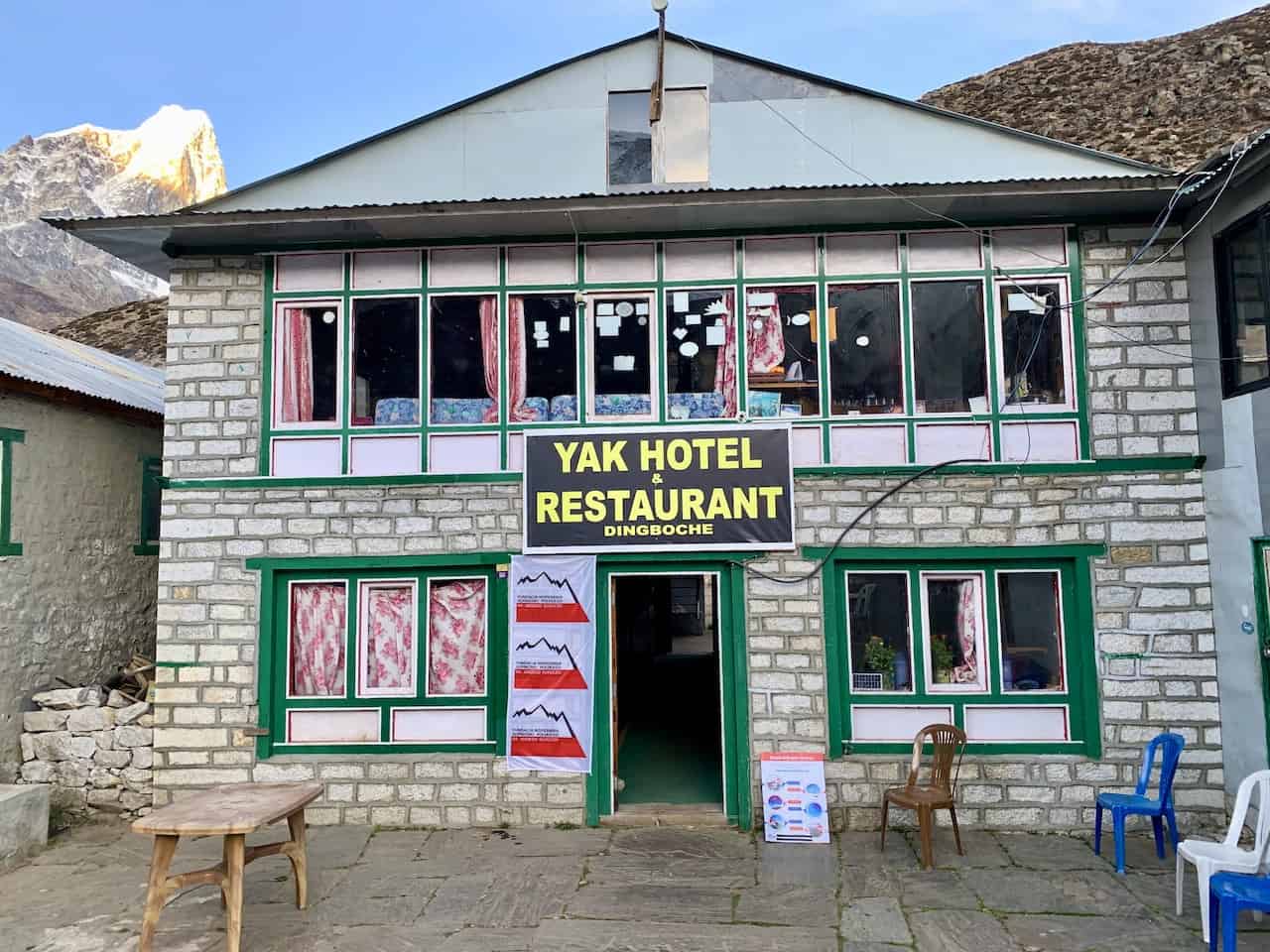 Take a look at this in depth overview of the Everest Base Camp Trek as well as the below guides I put together for each day of the journey:

That about does it for day 5 of the Everest Base Camp trek from Tengboche to Dingboche. If you have any questions or comments about the day or the trail in general, be sure to write them in below.

Also don’t forget to check out the other Nepal itineraries and guides up on the site (like why I would recommend to hike the Everest Base Camp trek in November). Have fun out there and safe travels! 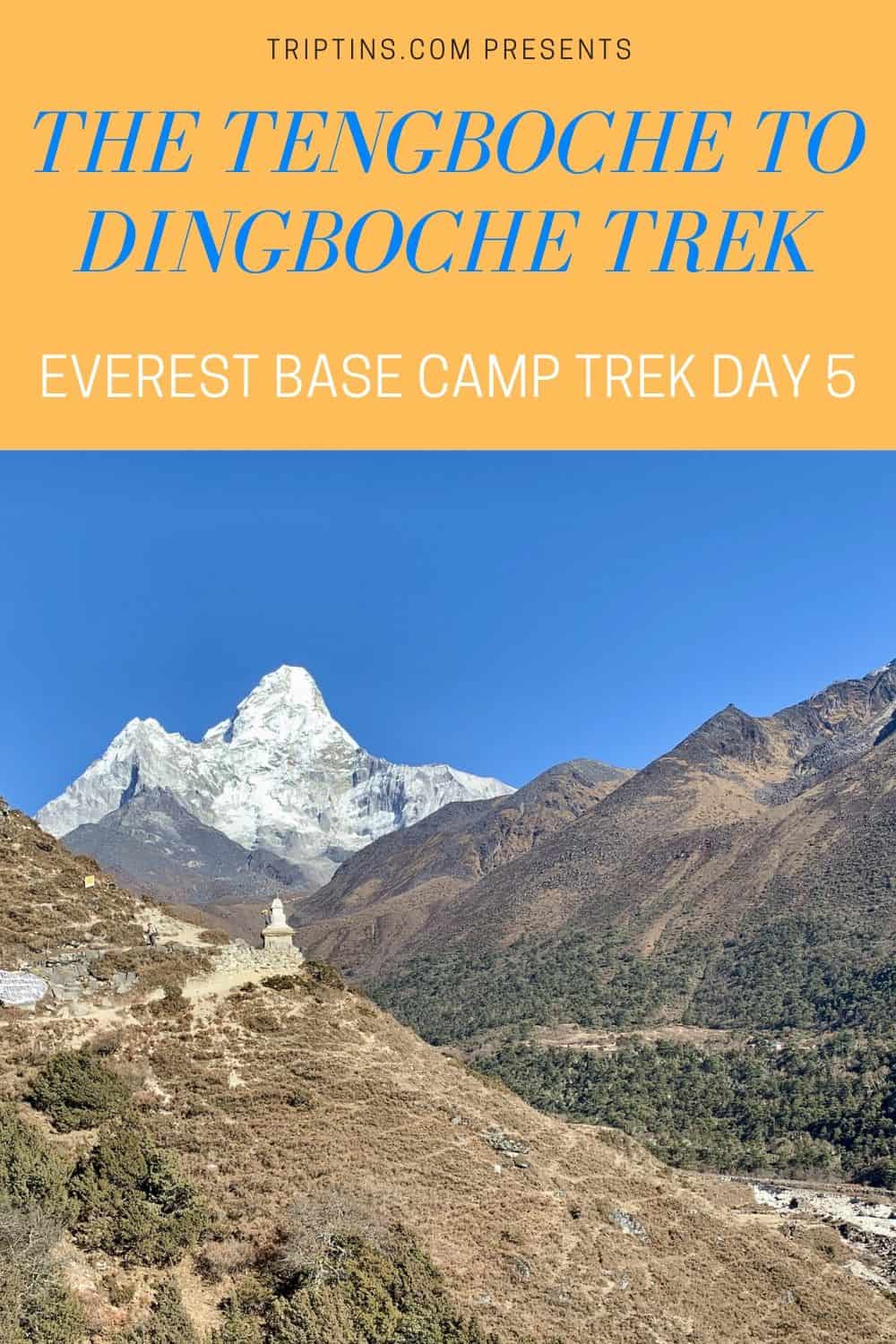 Everest Base Camp Trek Itinerary Blog | 11 Days in the Himalayas